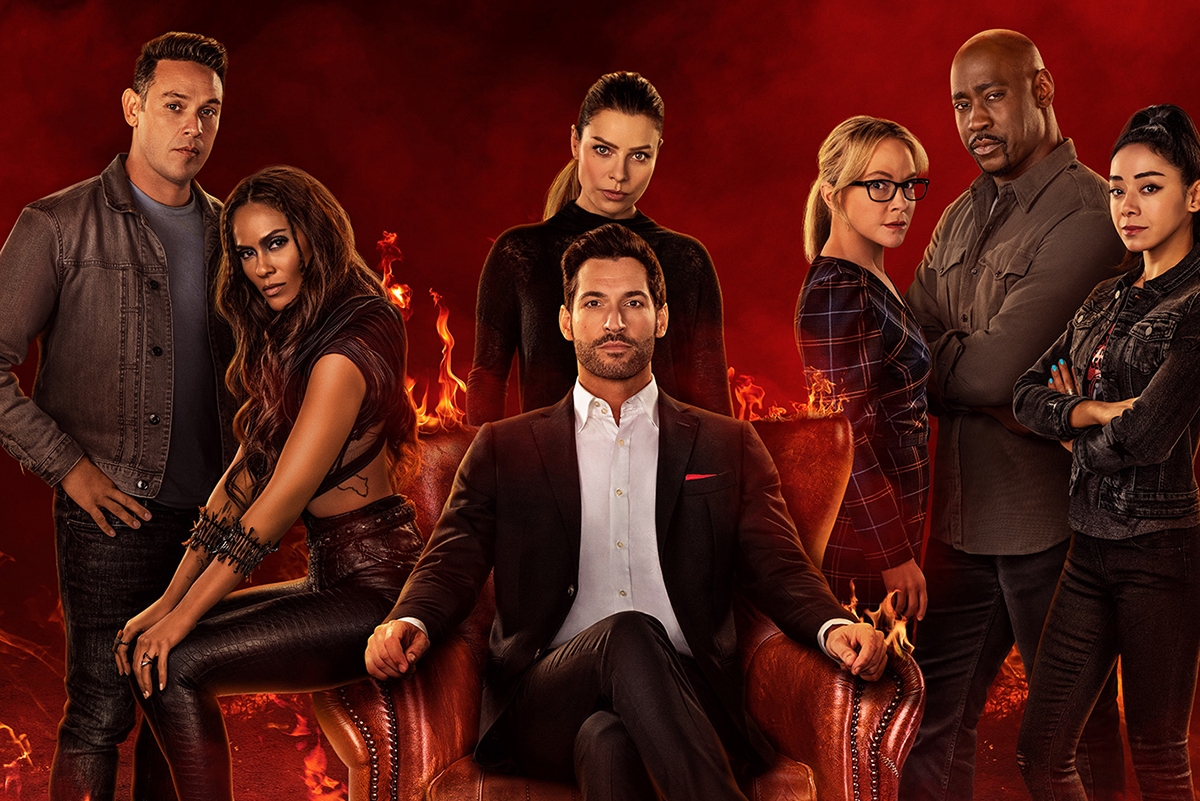 God. Angels. The Afterlife. Sin. Forgiveness. A discussion of who is inherently evil.

No, it’s not a rabbi’s High Holiday sermon. Rather, it’s the most religious show on television, which dropped its sixth and final season right before Yom Kippur: “Lucifer.”

There are a number of recent TV shows that are about religion — like “Shtisel,” a show so religious it barely discusses religion — or about philosophy and the afterlife (“The Good Place”). But “Lucifer” — which originated on Fox in 2016 and is now streaming on Netflix — discusses deeper issues of eschatology, the part of theology concerned with death, judgment and the final destiny of the soul and of humankind. That’s pretty impressive for a show that, on its surface, at least, is essentially a buddy-cop procedural.

“In the beginning…” the first episode of “Lucifer” begins, “the angel Lucifer was cast out of heaven and condemned to rule hell for all eternity… Until he decided to take a vacation.”

That’s right: The setup of “Lucifer” is that the devil himself decides to take a vacation in…where else? Los Angeles. When one of his devotees gets murdered and he meets a charming police detective, he eventually becomes her partner solving crimes.

Yes, the devil — a charming and narcissistic nightclub owner (played by Tom Ellis) — works for the LAPD solving crimes with homicide detective Chloe Decker (Lauren German). But unlike the other crime procedurals and their countless spinoffs, the cases are more incidental; the devil is in the details. (Har, har — pun intended.) In this “fantasy/drama/comedy,” as it’s described, Decker and the devil are opposites: she is methodical, loyal and earnest, while he is impetuous, lascivious and insouciant. Oh, and by the way, he has superpowers — eliciting people’s true desires — and she’s immune to them. Could this be… true love?

Yes, the will-they/won’t-they-get-together-even-though-she’s-a-divorced-mom-and-he’s-Satan through line propels the show. But what sets “Lucifer” apart is its modern day approach to biblical concepts and characters. Like Cain, the bible’s first killer (played by Tom Welling), who’s the antagonist in season 3; Eve, the bible’s O.S. (that’s “original sinner”), played by Israeli actress Inbar Levi; not to mention various angel siblings, like Lucifer’s twin brother Michael (also played by Tom Ellis). Last season was a big surprise: God himself, played by Allstate insurance frontman Dennis Haysbert, who just may be the best on-screen God next to Morgan Freeman.

Some might think that the setup of “Lucifer” is a stretch — and, well, it is. But as anyone who has ever lived in Los Angeles knows, this city is truly just as preposterous as depicted in “Entourage,” the show of bros trying to make it in Hollywood, which was based on producer Mark Wahlberg’s life, or the infamous, raucous soirees of yore at Hugh Hefner’s mansion. Hell, it’s very possible that some of my terrible old J-dates were the devil. (Maybe that’s why they never called me back??!)

“Lately I’ve been doing a fair amount of thinking,” Lucifer asks his therapist. “Do you think I’m the devil because I’m inherently evil, or simply because dear ol’ Dad decided I was?”

Lately — after binge-watching the entire five seasons of the show — I’ve also been doing a fair amount of thinking on these topics, too. More specifically, I’ve been wondering what Jews believe about heaven and hell and the afterlife. That’s especially true during these High Holidays, when we say U­netanah Tokef prayer: “On Rosh Hashanah it is inscribed/And on Yom Kippur it is sealed. How many shall pass away and how many shall be born,Who shall live and who shall die/Who shall reach the end of his days and who shall not,/Who shall perish by water and who by fire,/Who by sword and who by wild beast,Who by famine and who by thirst…”

This prayer goes on to enumerate how we might die — in short: all sorts of ways —  but it doesn’t talk about what happens after. And that’s where “Lucifer,” based on a character in DC Comics’ “The Sandman”  by Neil Gaiman, got me thinking about my own religion.

Yes, I grew up modern Orthodox. My parents spent tens of thousands of dollars on yeshiva education. While I can recite all the prayers in my sleep, quote the Torah and even lines of the Talmud, I don’t remember ever learning about the afterlife, or about heaven, hell, angels and devils. My school’s educational focus was on the pursuit of good deeds — but the emphasis was more on how to do these good deeds rather than what happens if you don’t.

Maybe that’s why I accepted the preposterous premise of the show precisely because, like almost all Americans, I have been inculcated with the Christian dichotomies of heaven/hell, good/evil, angel/devil. Still, I wondered how all of this jibes with Jewish tradition — truthfully, I wasn’t even sure if Jews even have a devil. Or hell. Or fallen angels. But being the intrepid reporter that I am, I decided to find out.

Turns out the idea of fallen, rebellious angels —  like Lucifer himself, who’s portrayed in the show as a fallen angel who rebelled against God —  was first put forth in a Jewish text, says Dov Weiss, an Associate Professor of Jewish Studies at the University of Illinois at Urbana-Champaign, whose next book is “Rabbinic Inferno: Hell in Classical Judaism” As Weiss explains, the Book of Enoch, an apocalyptic Hebrew text ascribed to Noah’s great grandfather, talks about angels who mated with human women and gave them illicit knowledge — beginning the rebellion against God.

“God sends the rebellious angels to an eternity in hell, after the final days of judgment,” he explains.“The ideas started in Judaism but were picked up by Christianity with the idea of the devil.”

And Satan? While the word is mentioned a few times in the bible, it means more of an adversary as opposed to an actual being. In much of Jewish literature (Kabbalah excepted) the devil is within  — it’s our own evil inclinations and not a little red-horned guy sitting on your shoulder.

I found this especially interesting because while “Lucifer” seems to rely heavily on Christian theology — after all, the titular character is a physical embodiment of the devil — the protagonist also makes clear he doesn’t force people to do bad things. In fact, he doesn’t even put them in hell. “You send yourselves,” he says about hell. “Driven down by your own guilt. Forcing yourselves to relive your sins over and over.” (And here I thought guilt was a uniquely Jewish tradition!)

Hell itself does seem to exist in Jewish literature — although, like just about everything in Judaism, there is a big debate about what hell is. Is it an actual place? A permanent landing? A temporary rest-stop until you get to the Garden of Eden? “For Maimonides, hell is just a metaphor for the destruction of the soul,” Weiss says.

And while Reform Judaism rejected the idea of heaven and hell in The Pittsburgh Platform in 1885, “Hell is alive and well in Orthodox Judaism,” Weiss says.

What I love about Judaism is that you can pick your poison — or your own concepts of the afterlife, of heaven and hell, of good and evil.

As “Lucifer” progresses over six seasons, Lucifer himself grapples with the question of whether he is inherently evil, and if he can become a better person — erm, I mean, entity — deserving of Lt. Decker’s love. He begins to see that everyone has a chance at redemption. “I refuse to be a scapegoat for something I bear no responsibility,” he says. “It’s a theme in my life.”

The final season of “Lucifer” made its Netflix debut on Sep. 10. As I ready to watch it — telling myself it’s in preparation for Yom Kippur, the Day of Atonement — I am grateful that a TV show gave me the opportunity to explore concepts of the afterlife in Judaism, and to distract myself from this current hell of a pandemic and its deniers here on earth.

Or, to quote William Shakespeare in “The Tempest”: “Hell is empty and all the devils are here.”