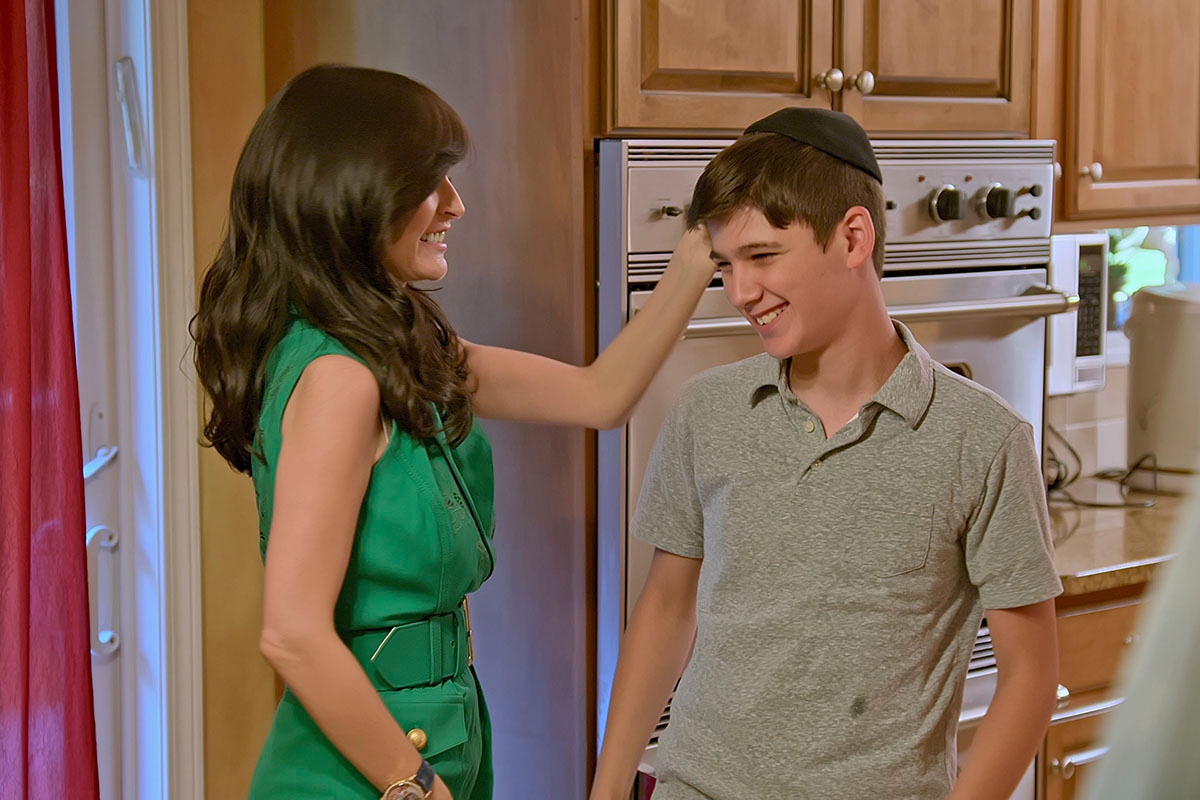 The trailer for Netflix’s original reality show, “My Unorthodox Life,” has arrived and, well, let’s just say that it is very Jewish — and we are very intrigued.

The new, Bravo-esque series — which premieres on July 14 — focuses on Jewish mom-of-four Julia Haart, a fashion designer and the CEO of the modeling and talent agency, Elite World Group. Haart, 50, was a member of a Haredi Jewish community until a few years ago, creating a drastic shift in her lifestyle and the upbringing of her children.

The trailer opens with a question about Orthodox Judaism: “Are there rules about sex?” Haart’s assistant, Robert, asks from the back seat of her car.

“My dear, there are rules about which shoes you’re supposed to tie first,” Haart responds, checking her blind spot as her younger daughter intones, “Oh…. my…. god.”

Haart then introduces herself as “the CEO of the largest conglomerate of modeling agencies in the world.” We meet her (second) husband, Italian entrepreneur Silvio Scaglia, and we learn she has four children. “It’s really hard to imagine that just a few years ago, I was living in an extreme ultra-Orthodox Jewish community,” she says next in a voiceover. “And then I just packed up and left.”

We imagine there’s probably more to this story, but it’s true: formerly a Judaic studies teacher, Haart left her community and launched her eponymous shoe company in 2013. She went on to be the creative director of La Perla and, as of 2019, Haart has helped represent “over 5,400 musicians, models and actors, including Willow Smith, Kendall Jenner, Jessie J, Coco Rocha and Cody Simpson” according to Eonline. Wow.

After the trailer’s obligatory toast scene — “L’chaim! To family!” — we learn that much of the reality show will focus on Haart’s four kids as they navigate life in the secular world. Batsheva, Julia’s eldest daughter, who got married at age 19, and now shares about her life to her million-plus followers on Tiktok. In a clip featured in the trailer, we see Haart tell the family: “We are not pressuring Batsheva to have babies” — a marked deviation from the typical trajectory for married young women in the Haredi community.

Haart’s older son, Shlomo, is navigating the world of dating while adjusting to modern conventions. In the trailer, we learn — spoiler alert! — that he has his first kiss as a young adult in law school.

We also meet Haart’s youngest daughter, Miriam, who is “passionate about building apps that empower women.” (Raise your hand if this was also your passion as a teen? No one? Great — I feel better about myself now, thanks!) In the trailer, we learn that she recently came out as bisexual. When Miriam shrugs off her identity, Haart’s response is affirming: “Not ‘bi, whatever.’ Bi. Own it.” (We love how supportive Haart is in this clip — all while she’s doing the very mom-task of folding laundry!)

Finally, we meet youngest son, Aron, who, wearing a kippah, seems to maintain ties with the ultra-Orthodox community. “People have tried to be like, ‘Why don’t you loosen up a little?’’ he tells the camera. “I’m like, ‘That’s not me.’”

During the trailer, Haart reflects on the struggles that she and her family face while adjusting to modern life. “It takes time to deprogram yourself.”

Like so much of reality TV, watching Haart’s kids “find themselves” on-screen may feel voyeuristic — and that could be a good or a bad thing, depending on your taste in television. Still, it was not the children’s choice to either join nor leave the Haredi community — plus, Haart’s kids are also dealing with all the normal, messy parts of growing up.

What’s more, the trailer demonstrates Haart’s negative feelings toward the community she left. For example, she shares how her passion for fashion is rooted in the limitations she felt as a young person. “I was covered up my entire life,” she says in a voiceover. “So, to me, every low-cut top, every miniskirt is an emblem of freedom.”

So yes, it’s quite likely that “My Unorthodox Life” presents a biased perspective of the Haredi Jewish community. (Netflix has had a string of recent programs about people who leave such communities, including, of course, the Shira Haas hit “Unorthodox” as well as the documentary “One of Us.”) Of course, it’s also clear that Haart is one person — and a glamorous person, at that — and, as the trailer demonstrates, her choices have made her and her family happy in the long run.

Haart’s personality comes off as ambitious, loving and intense. As she herself admits: “I’m not easy, but easy is boring.”

At the end of the trailer, Haart again shares her devotion to her kids. Despite her own outrageous success, she tells her kids: “I want you guys to all outdo me” — to which Miriam responds, “challenge accepted.”

Nice work, Netflix, as this trailer has really captivated us — even as it seems to hew closely to the “Real Housewives” playbook. We’re looking forward to seeing how Haart and her kids develop as the series progresses. We’ll be watching! Will you?