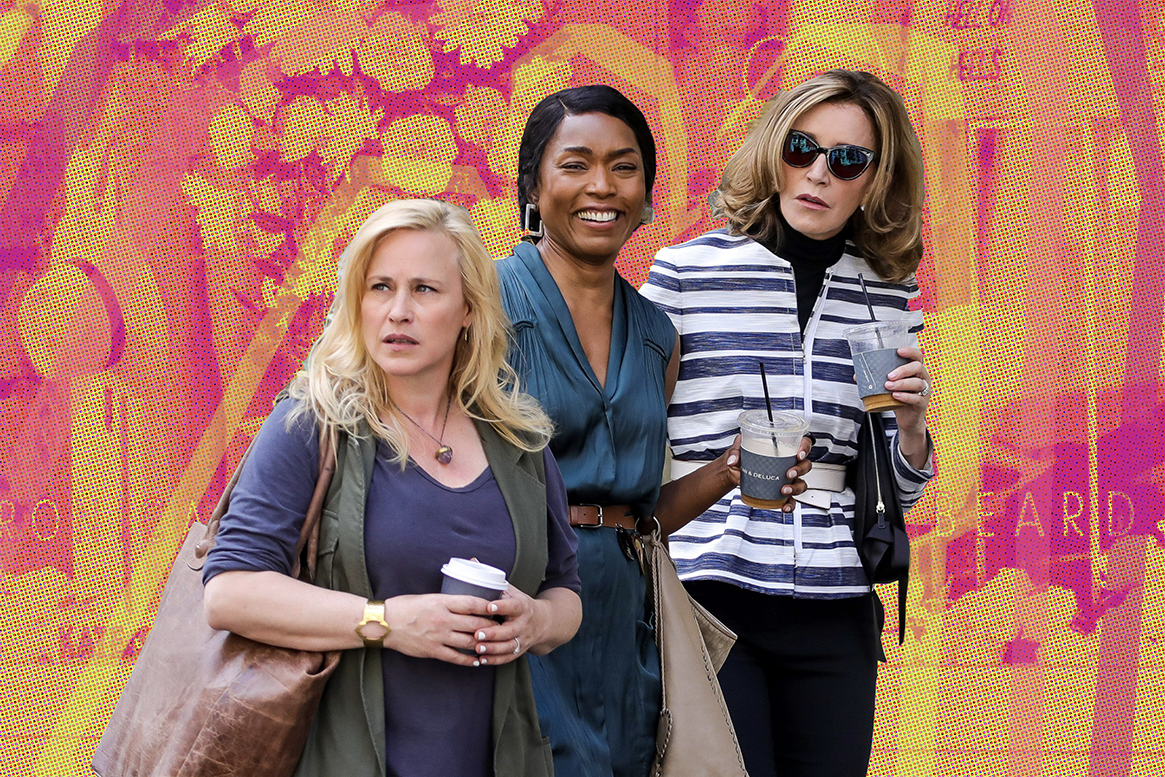 There’s a scene that I really like in the new Netflix comedy, Otherhood, in which three suburban moms and empty nesters (hence “Otherhood” — “motherhood” minus the “m,” get it?) take themselves to New York City on Mother’s Day in order to reconnect with their adult sons — and, of course, “unexpectedly” find themselves.

The scene I’m referring to is a heartfelt conversation between a Jewish mom, Gillian Lieberman (played by Patricia Arquette — who is a Jewish mom IRL), and her son, Daniel, played by Jake Hoffman (yes, Dustin’s son!) on a the stoop of a brownstone.

By this point in the film, Gillian’s parenting style has been established as Jewish Mother ™, replete with Yiddishisms and the spouting of the requisite phrase, “I have a nice Jewish girl for you.” (Said nice girl was discovered, obviously, at an acquaintance’s shul). Gillian has no respect for her son’s boundaries or wishes — I mean, she literally breaks into his Queens home, to bang that nail on the head.

In this scene, however, she is heartfelt and sheepish. She comes clean to her son about a painful moment in her past, that caused her go on a “fakakta egg diet” (don’t ask). They have a refreshingly frank conversation about love and infidelity. And then, Gillian utters the line every child with an overbearing parent — Jewish or otherwise — longs to hear: “I am not going to tell you what to do.”

It’s not a particularly revolutionary scene. It’s not pristine — it relies on many platitudes — but it’s sweet. And it feels good to watch, in the moment. Much like I found the rest of the movie: A feel-good but hardly revolutionary distraction, the perfect movie to watch on a Saturday night when you don’t have the energy to go out (or you can’t, because your babysitter stood you up, again).

Otherhood has three amazing superstars at the helm: Felicity Huffman — whatever you may think about the recent college admissions scandal, she can certainly act her way out of a paper bag —  Academy Award-winner Arquette, and Angela Bassett, who is the highlight of the movie by far.

If you think about it, three older mothers — whose sons have flown the nest, who are struggling to “differentiate” themselves from their children — are hardly ever starring roles in movies. Older mothers provide comedic relief, at best, and an explanation for the titular characters many psychological issues, at worst.

With that in mind, it’s no wonder producer Cathy Schulman and writer Cindy Chupak (who worked on Sex and the City) struggled for 10 years to get this movie made. (Just imagine all the meetings that were brushed aside with the idea that nobody wants see women over 50 on screen.) In that way, perhaps, Otherhood is quietly revolutionary.

So many comedies (excluding one of my faves, the brilliant First Wives Club) are about women trying to get married — or to have kids, in order to fulfill what we’ve been told should be our most important goals — according to THE PATRIARCHY ™. But these ideals are often enforced our mothers, Jewish or otherwise, and in certain ways the mothers in this movie are no exception — a great deal of plot revolves around the sons’ love lives, with an eye on the goal of future grandchildren.

Nonetheless, it is undeniably true that, for many women, having spent so much time and energy raising our children, reaching the stage when we are no longer actively “mothering” can be confusing and overwhelming. “Otherhood” does feel like the perfect word for it. It’s touching to see these female characters deal with the effect of distance — both emotional and physical — from their kids, and to watch them grapple with the changing perception of themselves, their (incredibly gracefully) aging bodies, and their relationships with their spouses.

But another truism this movie gets to — and that rarely gets explored elsewhere — is that this particular stage of parenthood is when we can form a more meaningful relationship with our children. Two of the mothers in this movie — Huffman’s character, who was detached and preoccupied with her divorce when she was raising her son; and Arquette’s, who embraced all the worst stereotypes of a Jewish mother — scarred and hurt their kids while bringing them up.

But in Otherhood, the moms manage to form more open relationships with their kids. Not perfect relationships, but more honest ones.

At the end of the day, all mothers and their flaws (or, um, lack thereof, in the case of Bassett’s character), become closer to their sons by letting go. Letting go of certain ideas they’ve always had about themselves, learning to see their sons for who they are, and, in the case of Bassett’s character, learning to be more selfish and prioritize herself.

Yes, Otherhood is not a great movie. But between its many cliches, it does have some great lines, some fun performances, and some truths about the later stage of motherhood and a woman’s life.