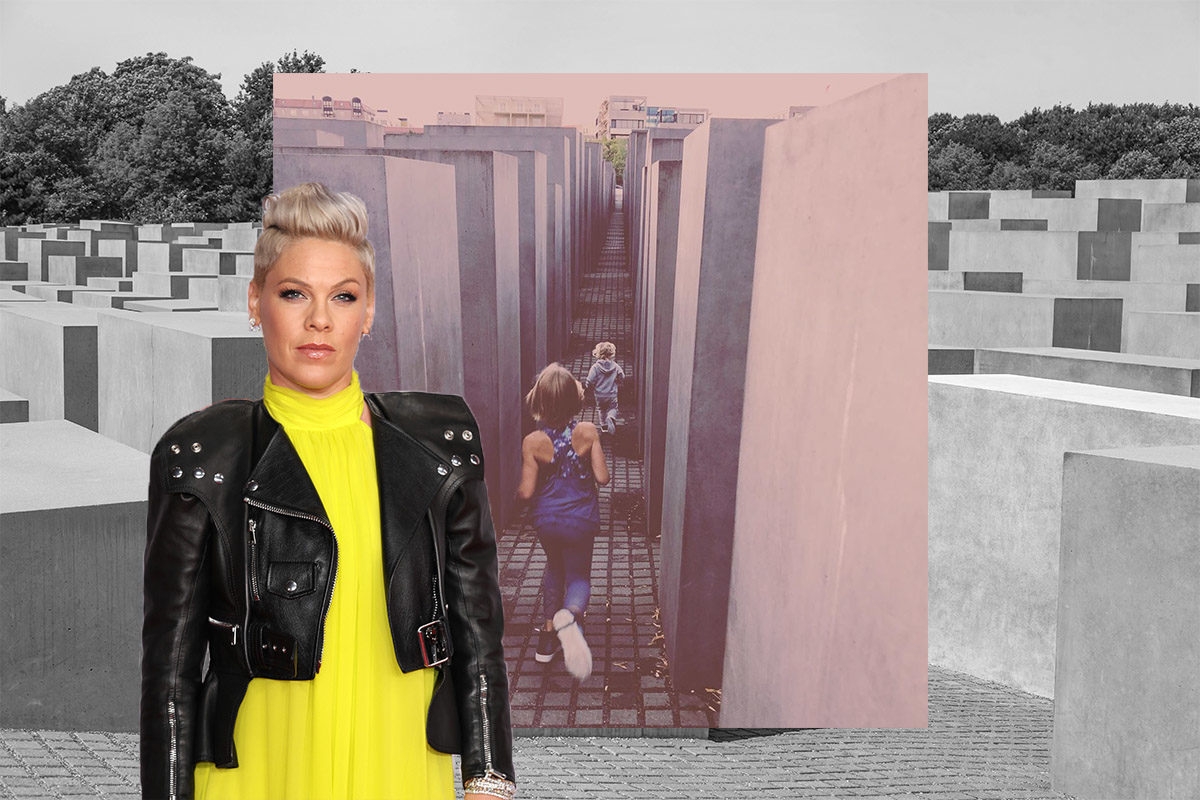 Superstar Pink is under fire for letting her children run rampant at a Holocaust memorial. Does this badass Jewish mom care? Nope!

On Sunday, the “90 Days” singer shared a photo on Instagram of her children, Willow and Jameson, running between the tall cement pillars at the Holocaust Memorial in Berlin. The post was immediately met with criticism from haters accusing Pink, 39, of “disrespect” and that she should teach her children to “respect the place.”

No stranger to online trolls, Pink — who was in Berlin performing for her world tour, Beautiful Trauma — knew exactly how to respond: “For all the comments; these two children are in actuality Jewish, as am I and the entirety of my mother’s family,” she added to the post.

Fans of the singer rushed to her aid and quickly pointed out that the architect of the memorial would approve of the children’s play. In the past, Peter Eisenman, 86, has said he designed the Berlin memorial to be treated differently from other Holocaust memorial sites.

Berlin, I love you. #holocaustmemorial #panamarestaurant #cocktailclasses #history #herstory #worldtour and for all of the comments; these two children are in actuality Jewish, as am I and the entirety of my mothers family. The very person who constructed this believed in children being children, and to me this is a celebration of life after death. Please keep your hatred and judgment to yourselves.

“My idea was to allow as many people of different generations, in their own ways, to deal or not to deal with being in that place, and if they want to lark around I think that’s fine,” Eisenman told the BBC.

This isn’t the first time Pink brought her daughter Willow to the Holocaust Memorial in Berlin. While on tour back in August 2017 — the same time the neo-Nazis through Charlottesville, the Jewish mom said her daughter told her, “This could have been us.”

“And I’m just listening to her like, ‘You’re amazing and you’re totally right: Everything that’s bad can be good again,'” Pink said.

The family is back in the German capital this summer, and in the heavily criticized Instagram post from July 14, Pink added: “The very person who constructed this believed in children being children, and to me this is a celebration of life after death. Please keep your hatred and judgement to yourselves.”

Some Instagram users were torn over how to perceive the controversial post, some saying “the location should be treated with high respect.”

Another user, Deb Johns, wrote that their relatives died in the concentration camps, and nothing about the picture is offensive: “It gives me joy to see children enjoying life and continuing on when so many died. It shows the bloodline and spirit of the Jewish people lives on and they were not wiped out and will not disappear or stop living their lives freely.”

Even some celebrities came to Pink’s aid, like fellow Jewish mom and actress Selma Blair: “I love Berlin too. I love that what happened is not being forgotten. I love this celebrating of life. I love you,” she wrote.