The Enduring Appeal of Manischewitz 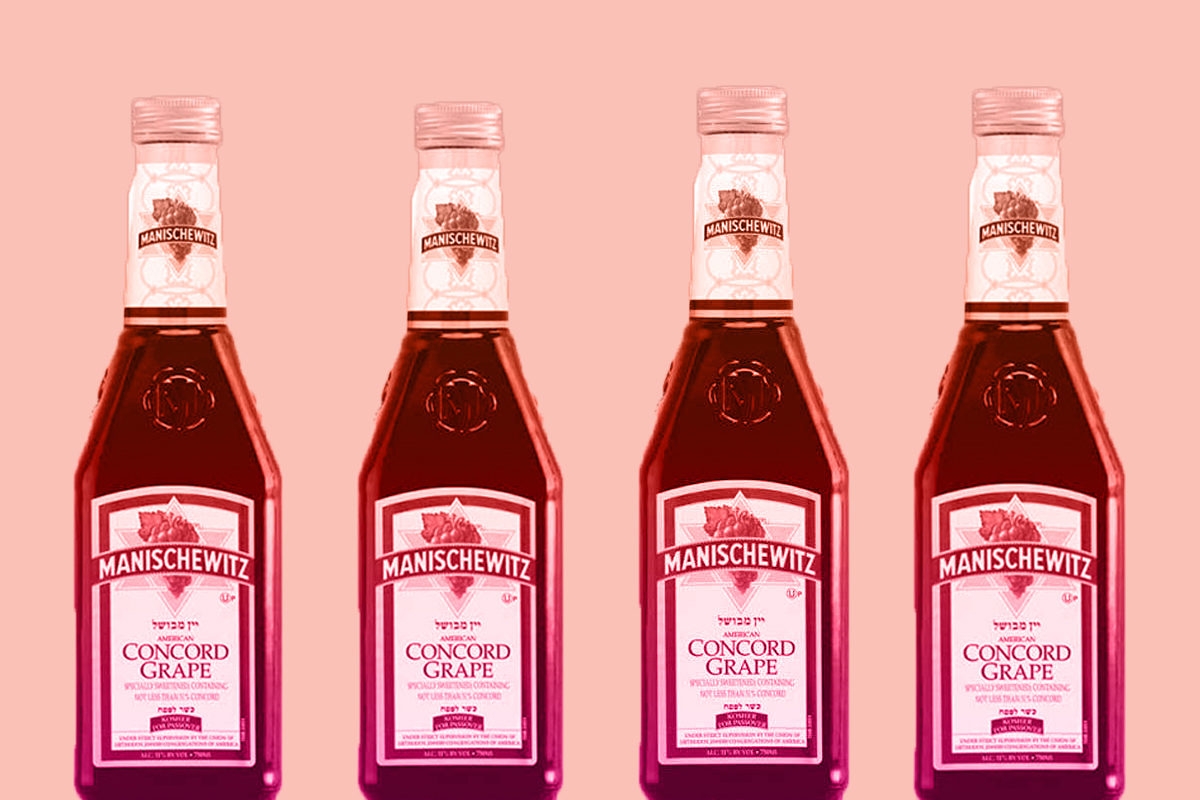 As we rapidly approach Passover — the most widely observed Jewish holiday of the year — ‘tis the season for matzah and Manischewitz wine.

Every year, on the first (and usually, second) nights of the holiday, Jews gather to retell the story of our epic redemption from slavery in Egypt. Matzah, also known as the bread of affliction, is mentioned several times in the Torah. Wine, too, is a biblical mainstay — though Manischewitz food company was founded in 1888 and was therefore never mentioned in the Torah. Nonetheless, you could be forgiven for thinking that a seder is not quite a seder without Manischewitz wine, which some regard as the wine of affliction.

If you are a wine aficionado, you may find yourself in the awkward position of having to purchase or drink (gasp!) this cloyingly sweet concoction of concord grapes and Rabbinic supervision that sells for around $5 a bottle. Never bought Manischewitz before? Here’s a tip: You can likely find it on the bottom shelf, next to the Boone’s Farm Wine Product, and other beverages favored by underage or homeless drinkers.

For the amateur sommeliers among us, those who know a well-aged Bordeaux from a rich Pinot Noir, drinking the traditional Manischewitz Concord Grape Wine may seem an apt way to remember the sorrows of slavery. In fact, the Concord grape was never intended for winemaking, but for throngs of new Jewish Americans who settled in New York in the early 20th century, the native Concord grape was … available.

Wine expert Jeff Smith likens the Concord grape to a “wet, feral mammal in a bottle.” But like so many other traditional Ashkenazi foods, borne from poverty and necessity, we make do – and add sugar! The result is a flavor that many deem terrible —  and yet, it is unmistakably traditional. As a vintage Manischewitz ad says, “There’s a seder in every bottle. Let the tradition flow.”

My first encounter with Manischewitz wine was at the kid’s table at my Great-Aunt Ethel’s seder. It was sweet, somewhat challenging to drink, and definitely not intended for kids. That was part of its allure. Just as my little girls enjoy traipsing around the house in my high heels, drinking Manischewitz made me feel very grown-up. Juice would have been easier to drink — just as it is easier for my kids to wear their own well-fitting shoes — but that would be no fun. Drinking wine with my cousins, all of whom were under 13, was much more fun than drinking grape juice together.

Sipping on this syrupy beverage also distracted us from another time-honored tradition: complaining about how much longer until we could eat. I imagined that Elijah the prophet would enjoy Manischewitz, if he ever showed up. In the meantime, if “tradition” had a taste, this was surely it.

Over the years, I have cautiously introduced Jewish culinary delights to non-Jewish friends and family members. Gefilte fish is apparently an acquired taste. I recall one non-Jewish friend who blanched when my uncle gleefully asked, “Could I please have more yuck!?” (I always thought “yuck” was the official name of the gelatinous goo surrounding the gefilte fish.) I love kasha and varnishkas, so I was surprised to see a friend attempt to discreetly spit it out into a napkin. When I asked with amusement how he liked it, he said it tasted like dirt. Apparently some find our traditional foods tough to swallow.

Manischewitz wine, however, has proven to be an outlier. Despite any self-consciousness I might have about the “sweet taste of tradition,” I am both proud and puzzled — but mostly puzzled — that the beverage has inexplicable crossover appeal. We Jews are not drinking alone. Dayenu!

When you think of African Americans and Jews, you might realize that we have a number of things in common, including a history of enslavement, discrimination, and major cultural contributions that belie our small numbers. What you might not realize is that there was a time when the typical Manischewitz drinker was described as an “urban, blue-collar African-American man.” In 1954, Commentary Magazine published an article about the crossover success of Manischewitz — The Monarch Wine Company which produced Manischewitz estimated that only 15 percent of its customers in the mid-1950s were Jewish.

On the heels of this crossover success, Sammy Davis Jr. — Rat Pack member and cool guy nicknamed “Mister Show Business” — was tapped to advertise Manischewitz wine. As an African-American and a Jew, he was a savvy choice. He helped amplify the Manischewitz name and slogan “Man-oh-Manischewitz!” to the point that Gene Cernan, Apollo 17 astronaut, reportedly blurted it out during his 1972 moonwalk. Just like the Jews it originally intended to serve, Manischewitz wine has a remarkable history.

Manischewitz continues to be a hit in some non-Jewish enclaves; it’s a favorite in many Caribbean communities, where it is the drink of choice for parties and holiday celebrations. Since 1987, Manischewitz wine has been owned by Constellation Brands. They say that the top export markets, in addition to the Caribbean, are Latin America and South Korea. Within the U.S., (non-Jewish) Asian customers are enthusiastic enough about Manischewitz wine to make it a staple on the shelves of Asian groceries.

By all accounts, Manischewitz wine is loved by many, even those who don’t care whether or not there is a seder  — or the blood, sweat, and tears of our ancestors — in every bottle. Roger Horowitz, author of the book Kosher USA, speculates that the Concord grape might yield a wine similar to those made from the scuppernong or muscadine grapes from the American South. This could explain why Manischewitz has been popular with African-Americans ,whose forebears likely made and drank wine from these grapes. Or maybe the wine’s crossover success can simply be traced to the company’s extensive marketing in the 20th century. Either way, if you enjoy the sweetness that recounts our sorrow, you are not alone.

Slaves coming into freedom don’t drink Grand Cru; they eat and drink whatever is cheap, quick, and available – like matzah and Manischewitz wine. So this Passover, as you raise your glass and consider all the blessings that would have been enough (Dayenu!), give a nod to the sweetness of both our freedom and our traditional wine. Man-Oh-Manischewitz!