The Second Gentleman Can’t Pass Up a Good Bagel 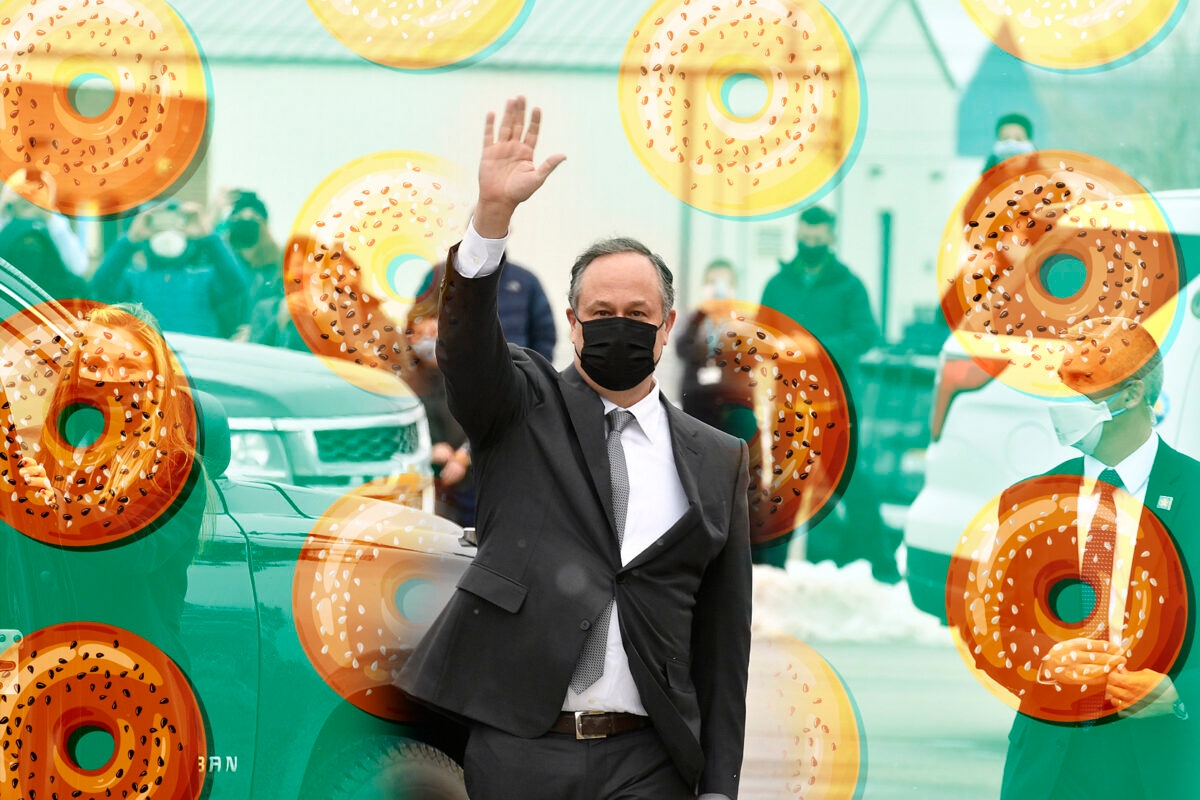 Our nation’s Second Gentleman, Doug Emhoff, can’t pass up a good schmear. That’s not surprising, as the Jewish dad and husband of VP Kamala Harris once said himself: “I am from Brooklyn, I grew up in New Jersey, and I love a good bagel.”

That’s probably why Emhoff couldn’t resist stopping at a bagel shop during his tour of Western states to promote the benefits of the Biden administration’s  $1.9 trillion stimulus package.

After a stops in Las Vegas and Albuquerque, Emhoff and Harris headed to Denver on Tuesday. There, Emhoff visited Rosenberg’s Bagels in the city’s Five Points neighborhood to talk about the rescue plan — and, yes, also to get his bagel on.

How does the Second Gentleman like his bagel? Unfortunately, neither he, nor the staff at Rosenberg’s Bagels, divulged that information, but we do know he enjoyed his bagels with some delicious lox. We love a bagel classic!

Couldn’t stop by Denver without visiting. Josh and I met virtually last year and have kept in touch ever since.

Rosenberg’s Bagels was founded by Josh Pollack, who is originally from Bergen County, New Jersey. Pollack missed the wonderful bagels he grew up with, so he decided to try and recreate them in his new hometown of Denver. To do that, he worked to replicate New York’s water chemistry, and uses the New Yorkified water to make the bagels. That’s dedication!

For Pollack, he’s not just supplying his customers with food: “We’re supplying nostalgia, memories, and joy,” he said.

This wasn’t Emhoff’s first taste of Rosenberg Bagels. Ahead of Rosh Hashanah, the bagel shop  — which was recently deemed as one of the country’s best by Food & Wine magazine — sent him some bagels, challah, and of course, sweet honey. Emhoff showed them off at a talk on Sept. 22, 2020 with the Colorado Democratic Party, which was led by Denver councilwoman Elbra Wedgeworth. During the event, participants got a virtual tour of the bagel shop, and Pollack explained how he altered the way his business works during the pandemic. The two also talked about “tikkun olam,” the Jewish value of repairing the world, and what it means to them.

“To me, it means to lead with love,” Pollack recounted, saying that that value informs both how he runs his business and how he tries to bridge the political divide during such a fraught time.

“Wherever we are, we value togetherness, family, our common history, and the High Holidays are a universal acknowledgment of those concepts,” Emhoff said. He also acknowledged value of repairing the world for Rosh Hashanah on Twitter:

This Rosh Hashanah, I’m re-committing myself to do everything I can to help heal our nation & repair the world. My new year's wish is that you will join me.

From my family to yours, Shana tova!

P.S. throwback pic of the fam when we could all be together — miss you, love you. pic.twitter.com/KRSSdtpm63

This is what encouraged him to support pro-bono legal services, he said, including Bet Tzedek, which means “House of Justice” in Hebrew.

“I’m a passionate advocate for something that I call ‘access to justice,’ so people can actually get legal assistance to issues that adversely impact their lives,” he explained. “So while I am, yes, an entertainment lawyer, I always try to do my part for those who need help, to stand up against unfairness, to stand up against injustice.”

We love Emhoff’s way of mixing Jewish food and Jewish values — and, yes, we love that he loves a good bagel. Now we just need his take on an important political matter: Should one toast a fresh bagel?