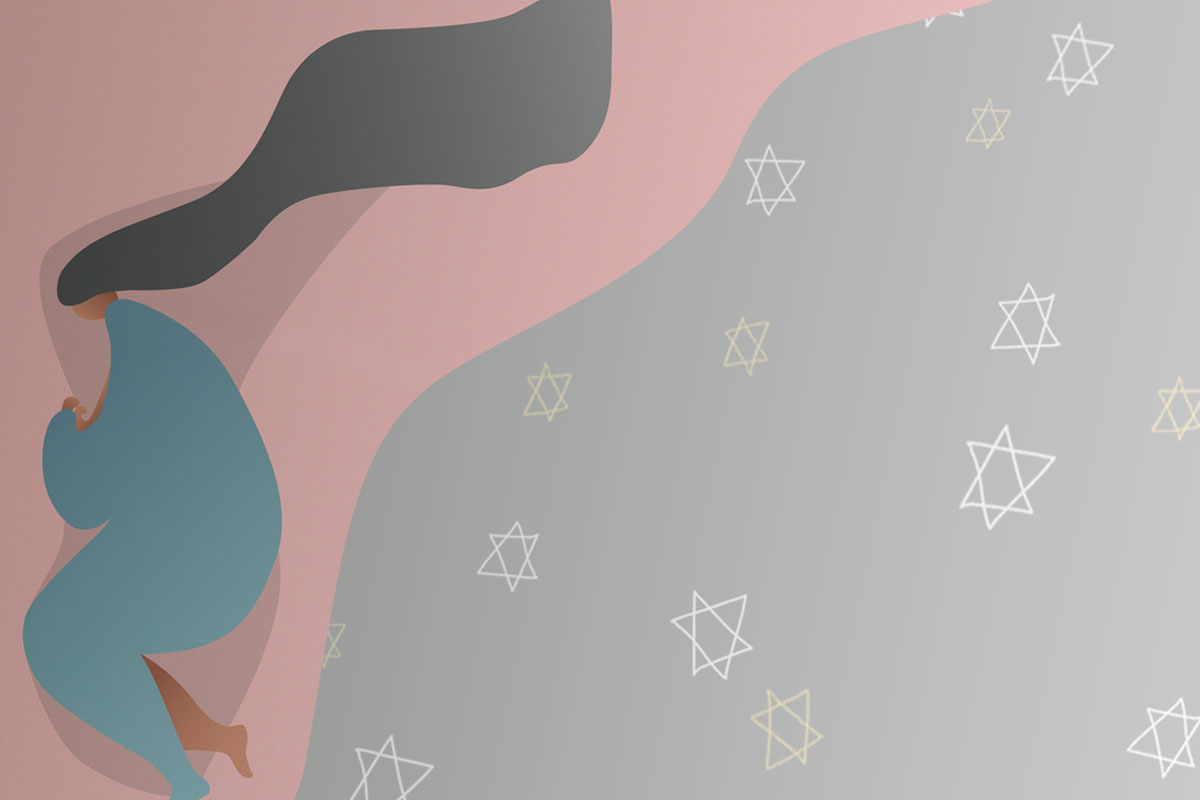 I was at a routine check-up at 32 weeks gestation when I found out my son Fox had no heartbeat. I learned I was going to have to deliver a dead baby on Thanksgiving Day. I was going to be induced. What was supposed to be a celebration was now going to be hours of agonizing mental and physical anguish coupled with shock. I would have to say goodbye forever to the baby I incubated for 8 months. And, to add insult to injury, I didn’t have any Jewish traditions to guide me.

For much of Jewish history, the response to having a dead baby was to move on, not talk about it. Miscarriages and stillbirths were not mourned. According to Maimonides, the great legal scholar, a baby could be born breathing and live 30 days and still not be mourned. These fetuses were buried in an unmarked grave. No tombstone was placed, no kaddish recited, and no shiva observed. The mourning rituals simply did not apply. Life carried on.

All of that seemed conceptually fine to me after suffering an eight-week miscarriage—I knew my baby didn’t yet have cartilage, bone, or hair. I took comfort in the tradition’s determination that mourning was not needed when passing an anonymous embryo.

Before our baby died in utero, we had done everything “right” during our pregnancy, from a Jewish and secular standpoint.  We made no announcement. We had no nursery ready, no baby shower. I had taken my prenatal vitamins religiously, exercised often, and made every single prenatal appointment anxiously on time.  Only when we finally made it to the third trimester did we cautiously talked through names, just in case. (In Jewish culture, one does not celebrate something before it happens in the event that something bad—the evil eye—might cause it to not manifest.)

During our twelve-hour labor, between nurses coming in and out to check only my vitals and contractions, my husband and I desperately texted the rabbi at the synagogue we had just joined for answers. How does someone mourn a stillborn? We fiercely Googled and looked through whatever religious texts we could find virtually. We called my grandparents for wisdom. We craved closure. We needed to mourn our loss. We tried to find a better answer than not burying or mourning our dead son. We quickly learned that there were no better answers.

In the time between finding out there was no heartbeat and delivering our son, all our beliefs were challenged. We started to question the Jewish superstitions around pregnancy, all the practices we had observed so meticulously. We wished we had announced our pregnancy so more folks could rally in support around us. We mourned the time we didn’t pause to be grateful for every day that I stayed pregnant. We felt like we missed out on photos we could look back on longingly. We learned the hard way that a person doesn’t just mourn the loss of a pregnancy or baby, they mourn the loss of possibilities, the loss of future, the loss of what never would be. It was vital that parents find a way to mourn that loss of human and potential.

In that small hospital room, I thought of all the generations of women before me who had confronted their grief in silence and isolation. Our stillbirth showed us that Judaism didn’t have all the answers, and sometimes the answers it did have, weren’t helpful (in terms of healthy coping). Rather, they were simply a survivalist response. Throughout history, pregnancy and infant loss was common but that trauma was small compared to the mass murder Jews had experienced throughout history.  Pregnancy and infant loss was an area of life that had been overlooked.  And so, in that small hospital room, we created our own ways to mourn.

Three nurses told us that families cope better when they have the opportunity to say goodbye to their babies. One study from 2016 confirmed that parents who got to hold their babies— feel them in their arms, sniff and kiss their cold heads, speak loving words to those purpled ears—had better mental health outcomes after. In fact, because stillbirth is recognized by the medical community as a life-altering trauma that could considerably increase risk of PTSD, OCD, and depression, most hospital nurses are trained in helping families spend time with their babies in meaningful. Although Judaism encourages its mourners to remember their loved ones as they were living (we don’t do open caskets), this unique situation—meeting a loved one for the first time in death— required us to be open.

In addition to our nurses encouraging us to hold Fox, they also offered us an ice cot that was available to preserve the body longer. They shared that some families want to introduce their stillborn babies to grandparents and siblings. Some want professional photographers to come in and capture these intimate moments to cherish later. Some parents want to bathe and dress their babies, one first and final time. All of these were examples of healthy coping and mourning rituals we could consider upon our son being birthed.

After our son officially came into the world silently with his eyes sealed shut, we named him Fox.  Through the walls, we heard the cries of live babies emerging. We heard celebrating mothers shouting in joy and relief. Our room was silent and dark as the nurse dressed Fox and took photos onto an SD card that a Now I Lay Me Down to Sleep photographer would edit for free. She handed me my son, swaddled like a live newborn, and I held him in my arms. In that moment with him, I knew I would never have to look back in thirty years and wonder what he looked like. I wouldn’t have to regret not holding him in my arms, no matter how hard it was to feel the limp coldness of his body.

In that moment the nurses were right. He was dead (you really think your baby is going to take a miracle breath.), and I would be able to accept that loss perhaps sooner than if his body had been whisked away. After I touched his ash blond hair for the last time and squeezed his cleft chin, I gave him back to the nurse who would take him to a canvas box in the morgue. With empty arms and still bound to the hospital bed, I shared my story on Twitter and over twenty-five thousand people sat Shiva with me for the next seven days. Longer. Hundreds of people filled my inbox with their own stillbirth stories, some sharing for the first time, some volunteering how they mourned and why.

The hospital gave us a small white box to represent his life, and we gladly accepted. In that box was a clipping of his hair, fingerprints, and footprints. Every hat and blanket his body touched. A gown. The SD card. It was the only tangible objects I could hold in place of his body. I white-knuckled the box while I waited for my legs to gain feeling.

No chaplain came to us, and the doctor had long vanished. The easy part was over. Now we would have to figure out how to go back to life again with no manual. The swirl and flood of how will be do this? began: We would have to explain to our three-year daughter why she didn’t have a brother anymore. We couldn’t just pretend he didn’t exist. We would have to continually and gently remind her that he wouldn’t ever come home. We would have to show her the contents of the box and pictures periodically, so she knew he did exist. All of these acts of transparency and honesty would hopefully prevent her from taking on an infectious and complicated grief we now had to live with.

Once I could walk, we were encouraged to leave the hospital quickly to not upset the parents birthing live babies. We planned a small funeral-like ceremony our rabbi supported. He sang “El Malei Rachamin” and told us how the literature on pregnancy loss is so varied and contested and there is room for interpretation, room for growth.  At one point during the ceremony, I looked at my 87 year old grandmother who was sobbing, and I saw that she too understood the importance of acknowledging our stillborn, the ending of who we used to be, and that loss of innocence.

It gave us comfort to know that we had the agency to create our own stillbirth mourning ritual.  We learned a powerful lesson in prioritizing our mental health over a few outdated texts. This decision was precisely what would benefit Judaism the most in the end, as it would keep us alive and healthy for generations to come. It was also what has kept our people alive for so long—the ability to question and adapt. We took what served us and left what didn’t.  In doing so, we also showed others that they could survive, and also that their baby’s name and memory could be a blessing—dead or alive.