There’s a Long History of Jews Playing Nazis on Screen 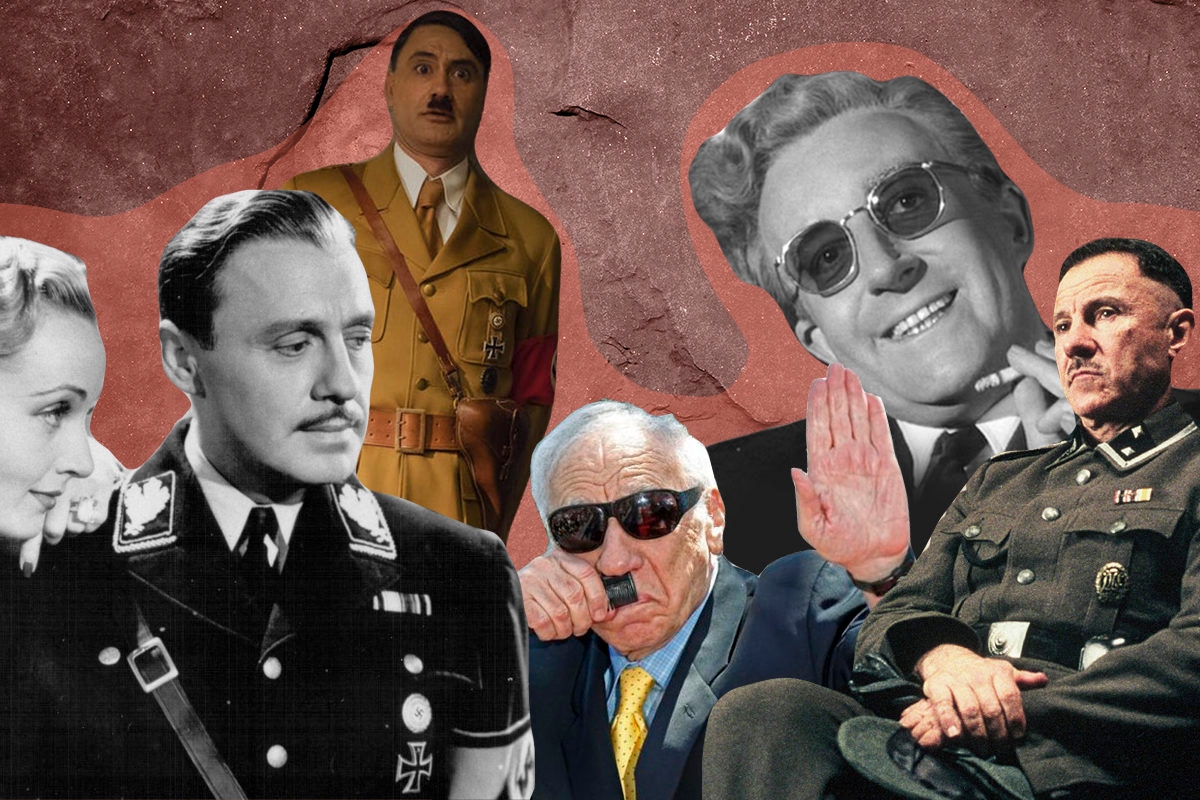 “What better way to insult Hitler than having him played by a Polynesian Jew,” Waititi himself tweeted.

When it comes to the Holocaust and humor, many artists, writers, and actors feel they have to tread a thin line: When does satire shine a light on injustices, and when does it become sacrilegious and downright hurtful? And yet, there seems to be a general consensus: Making fun of the slaughtering and suffering of Jews is never OK. But making fun of Nazis? That, my friends, has been a favorite pastime for nationals of so many Allied countries — including, of course, Jews.

For decades, Jews have played Nazis on the small and silver screens, including — startlingly, amazingly — during the height of the Holocaust.

As I started exploring these roles of Jews portraying Nazis, I couldn’t help but get a little verklempt. Many of the earliest portrayals of Nazis by were by immigrants and refugees — some even were German Jewish actors who left Germany when Hitler first rose to power — as well as the children of immigrants from countries whose Jews were brutally slaughtered.

And yet, here they were on screen, these vital, successful Jewish actors, often mocking those who wanted their demise. What better revenge against the Nazis is there? This isn’t just that Jews are thriving, creative, and successful — they’ve also taken their deepest traumas and turned them into art.

Here’s a look at some of the most famous times Jews played Nazis.

Moe Howard, the Jewish leader of the Three Stooges (OK, they were all Jews!) was the first American to satirize Adolf Hitler in film, all the way back in 1940! While the role is a fictionalized portrayal of the Nazi leader — Howard plays the leader of a fictional country called Moronica — it is nonetheless quite poignant and pretty hilarious, too.

The comedy also embraced the Stooges’ Ashkenazi Jewish background, by sprinkling in some Hebrew and Yiddish to further spite the Nazis.

In this comedy from 1942, Jack Benny plays a Polish actor in Nazi-occupied Poland who plays a Nazi in his theater’s production. (So meta!) Benny was born Benjamin Kubelsky in Chicago in 1894, the son of Jewish immigrants from Eastern Europe. He went on to become one of the most revered comedians of his time.

Here is a Jew in the height of Hitler’s power, starring in a movie — directed by a German Jew, Ernst Lubitsch — that outright mocks the German leader.

At first, the film was not well received. In 1942, the Nazi threat was palpable in the U.S., and Americans did not understand the need to mock such serious danger. (We did not know the full horror of the Holocaust at that point.)

According to Benny’s 1991 unfinished autobiography, Benny’s father was so incensed at seeing his son in a Nazi uniform that he left the movie theater early into the screening. But Benny insisted that his father watch the movie until the end, and his dad ended up liking it so much that he watched it over 40 times.

German actor Conrad Veidt was a Lutheran, but here’s the thing: Veidt filled out his race as “Jewish” in all formal paperwork that the ruling Nazi party required. Why? The star of the famous 1920 silent film The Cabinet of Dr. Caligari married Ilona Prager, a Hungarian Jew, in 1933. It was his third and last marriage.

Despite being successful in his home country, Veidt refused to abandon his wife or adopt Nazi ideology. And so, he left Germany, first for England and then for the U.S, where he continued his acting career — often, ironically, by portraying Nazis.

In the iconic Casablanca, Veidt plays Major Heinrich Strasser, leading to the famous line,”Major Strasser has been shot. Round up the usual suspects.”

Ludwig Donath in The Strange Death of Hitler (1943)

Jewish actor Ludwig Donath plays a Hitler impersonator who is kidnapped and forced to undergo plastic surgery in order to look more like the Fuhrer — to become a decoy for assassination attempts. Though Donath had played a handful of Nazis before the role, he actually played the role of Hitler three times that same year — he was also the voice of Hitler in Margin of Error and The Moon is Down.

That’s right, Luther Adler — brother of actress and acting coach Stella Adler — played Hitler in two separate movies in 1951. The son of Russian immigrants, Adler got his first acting role in the Yiddish theater at age 5 and went on to play Hitler. Talk about a range! Fascinatingly, he also played Hitler in an episode of The Twilight Zone.

Billy Wilder directed this critically-acclaimed and commercially successful movie. The movie takes place in a German POW camp, run by Colonel von Scherbach, played by Austro-Hungarian Jewish director Otto Preminger (who directed the aforementioned Margin of Error) in one of his few acting roles.

Basically all the Nazis in Hogan’s Heroes

First, there was Werner Klemperer, who won two Emmys for his role as the very serious Colonel Wilhelm Klink. Klemperer had played many a Nazi before Hogan’s Heroes, most notably Adolph Eichmann in Operation Eichmann (1951) and Nazi prosecutor Emil Hanh in Judgement at Nuremberg (1961). But it’s his role as the commander of this fictional POW camp that he will always be remembered for. Klemperer’s father was Jewish, though he converted to Catholicism for a time — and then later, back to Judaism.

Under Klink served Sergeant Schultz, whose poignant catchphrase was “I see nothing! I hear nothing! I know nothing!” Schultz was played by John Banner, an Austria-born Jew who lost much of his family to the Holocaust.

General Burkhalte was played by Leon Askin — born Leon Ashkenazy in Austria, who emigrated to the US in 1940 and fought in the air force during the war — and Major Wolfgang Hochstetter was played by Howard Caine, who was born Howard Cohen in Nashville, Tenessee.

Though definitely not a Nazi, one of the POW in the camp, French Corporal LeBeaux, was played by Jewish actor Robert Clary, who himself was a prisoner at Buchenwald and survived the thanks to his singing and entertainment skills. He is the only member of his family to survive the war.

Anton Diffring in, well, everything

Anton Diffring’s German origins — as well as his light hair and piercing blue eyes — got him cast as a Nazi over and over again through his decades-long career. Diffring was actually born Anton Pollack, the son of a German Jewish store owner who managed to avoid the horrors of the war.

Diffring went from playing unnamed and uncredited German soldiers in 1950 to playing some notorious Nazi leaders in the likes of Where Eagles Dare (1968) and SS officer Reinhard Heydrich in Operation Daybreak (1975). He played Joachim von Ribbentrop, Hilter’s foreign minister, in the 1983 mini-series The Winds of War. His last Nazi role was in a Doctor Who in a three-episode serial called “The Silver Nemesis” in 1988.

One of the three characters comedian Peter Sellers played in the iconic Stanley Kubrick film was the eponymous Dr. Strangelove, a former Nazi and nuclear warhead expert. Sellers also played Hitler in the British comedy Soft Beds, Hard Battles — though it was one of seven roles that he played in that film.

Sellers’ Jewish identity was somewhat fraught. His mother was Jewish and his father was Protestant, but he grew up going to Catholic school. That’s enough to make anyone’s relationship to their Judaism very complicated!

That’s right! Mel Brooks reprised a version of the famous Jack Benny role from 1942 (see above!) in 1983. Brooks even rapped as Hitler in the film. The comedian, of course, has a legacy of mocking Hitler, notably in this sketch of Hitler ice skating from History of the World: Part I and in The Producers.

Jewish British actor Steven Berkoff played Adolf Hitler in this miniseries, based on the novel by Jewish writer Herman Wouk.

Joel Grey plays Joseph Goebbels in this dark, fantastical delve into the mind of Hitler. The Jewish actor is also known for playing the master of ceremonies in the 1972 film adaptation of Cabaret, possibly his first Nazi role as his character (spoiler alert!) goes from mocking Nazis to espousing some of their ideology.

Harvey Keitel plays SS-Oberscharführer Eric Muhsfeldt in this dark film about an insurrection among some of the Sonderkommandos (Jewish prisoners charged with disposing of bodies) at the crematoriums in Auschwitz. The son of Jewish immigrants from Poland and Romania, Keitel plays a cruel Nazi villain opposite Jewish prisoners played by Steve Buscemi, David Arquette, and Natasha Lyonne.

It wasn’t the last time Keitel played a Nazi. In the 2009 film by (honorary member of the tribe) Quentin Tarantino, Inglourious Basterds, Keitel, though uncredited, voices an OSS commander. Keitel, who was a big supporter of the film, also made sure to pass the script of Inglourious Basterds to the ADL for approval (according to Keitel, they loved it). What a mensch.