These Days, Baking Challah Is a Powerful Act of Defiance – Kveller
Skip to Content Skip to Footer

These Days, Baking Challah Is a Powerful Act of Defiance 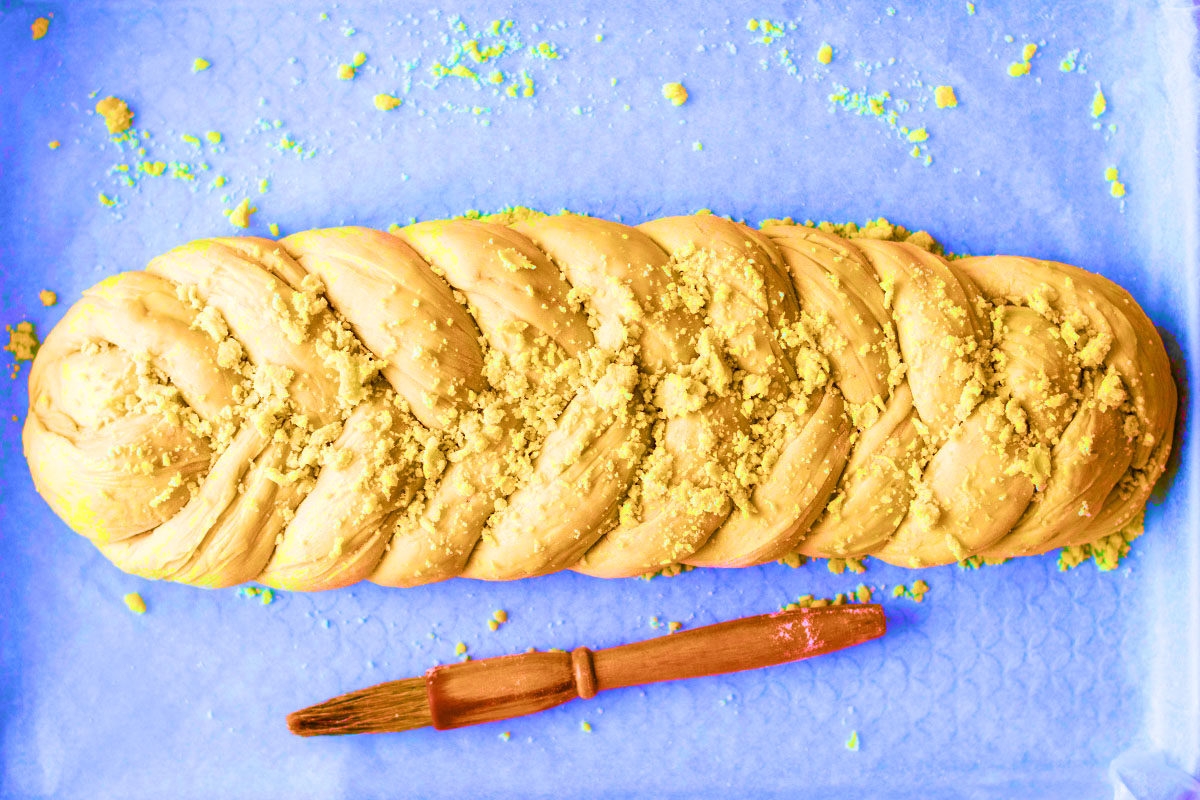 My house is reliably crazy in the mornings. Fridays are no exception. Sometimes my two boys have slept at their dad’s the night before, so there are “only” four kids in the house, and other times, all six of them are around.

But as any parent knows, no matter how many kids you have, it’s not a question of whether there’s chaos in the morning —  it’s only a question of just how much chaos. We regularly have fights over breakfast consumption, toy sharing, missing permission slips, bed-making failures, whether or not it’s Pajama Day at school — usually, the answer is no — you name it.

But, no matter how chaotic things get, around 7:30 a.m. every Friday, without fail, my 8-year-old daughter and I get out the bowls, the yeast, the flour, the eggs, the sugar, salt, and canola oil. We only have a short window to work, since the bus for school comes just after 8 a.m., and, as you probably know, it takes about 10 minutes just to get the kids’ coats, shoes, and backpacks on. We let the yeast activate in hot water as we crack the eggs and measure the sugar and flour, inevitably sprinkling some on our clothes and the floor. And after we’re finally done kneading the dough we’ve made, I leave it covered on the counter so that it can rise as we go about our days, which is the first step in making the challah we’ll be eating as the sun goes down that night.

On the surface, this looks like an act of domesticity. And sure, I suppose on one level, it is. But I’d contend that it’s actually an act of defiance.

We live in a time rife with anti-Semitism. Of course, there’s really never been a time without anti-Semitism, but lately, the specter of those who hate us seems to loom larger than it has in many years. With anti-Semitic tropes trafficked on both the political left and right, it seems like we Jews are being assigned our time-tested role of scapegoat for the world’s ills. Hatred is spewed out everywhere from graffiti on walls of shops and stores to hateful comments on subways and street corners and schoolyards. Gravestones are desecrated, tipped over and painted with expletives. And of course, there are the terrible acts of physical violence, the most prominent examples  — in recent weeks, at least — include the targeting of Jersey City Jews by two shooters, and a man who attacked attendees at a Hanukkah party in Monsey with a machete.

There are those who say, thanks to incidents like these, that it’s no longer safe to be Jewish in the United States. This idea is expressed at least once daily and explicitly in my news feed by Jews from all over the country. It’s implicit in headlines from sources all over the political map, from The Atlantic and The Washington Post, to Fox News and The Jerusalem Post.

To those who say that it’s not safe to be a Jew in America? Well, I refuse to agree with that.

I will not keep my head in the sand and ignore the hate crimes against American Jews. At the same time, I will also will not hide my Judaism behind closed doors. Being Jewish is a critical part of my life, and so is being American. As a fourth-generation American, I grew up believing in a country that, despite its flaws, has tremendous potential due to its veneration of democracy, the rule of law and the diversity of its inhabitants.

And so, my daughter and I don’t just bake challah every week — we also do a Facebook Live of our challah making. Some weeks, it’s just me behind the phone, shooting the breeze with my daughter about everything from overnight camp to her palate expander. Other weeks, it’s challah making in the foreground and intense sibling smackdowns in the background, screaming and assorted noise included. Sometimes, our videos are educational — we may discuss how the differences in humidity change the rise in the challah at different times of year, or whatever Jewish holiday is on the horizon and how we’ll observe it. Other times, it’s unintentionally amusing, like when my son decided to step in and take over when my daughter went to the bathroom, and when she came back she threw a fit. (It’s live, people!) But no matter what happens, our weekly challah videos are always our flag in the sand.

Filming the Facebook Live each week isn’t just a record for me, it’s also a way to stand on the record with the world at large. We do it to show the world that, each and every week, we have made the Jewish choice to make Shabbat the cornerstone and linchpin of time. We do it to invite others to join us — whether virtually or actively —  in the determined act to carve out a sacred, Jewish space on an otherwise busy day in our otherwise busy lives. And if I can find the time to do this, as a mother of six kids, so can you. (And don’t forget: The reward for your labors are delicious carbohydrates!). I believe firmly that if you want to live your life with certain priorities, you need to live them out loud. I want to be a proud American Jew, and therefore, I will be.

That is what I mean when I say that making challah every week is an act of defiance. In “ordinary” circumstances, when we post our challah prep on social media, we are telling the world that this is what we do every week, no matter how crazy things around us may be — the sibling squabbles, the tears over the lost stuffed animal, and so on. But in the troubled world in which we live now, I’d argue our challah making is even more important and necessary. In the act of making time to do this every single week, we are asserting our control over an out-of-control time. We are showing up and proclaiming our Jewish identity with our actions —  and, moreover, we’re doing so at a time when it would be far easier to mask or deny this fact of our existence.

And so, every Friday morning, my daughter and I hold on to this brief slice of time. And as the rest of the world unreliably and chaotically spins all about us, in this brief oasis of kneading dough with our hands, we prepare a small taste of the world to come.