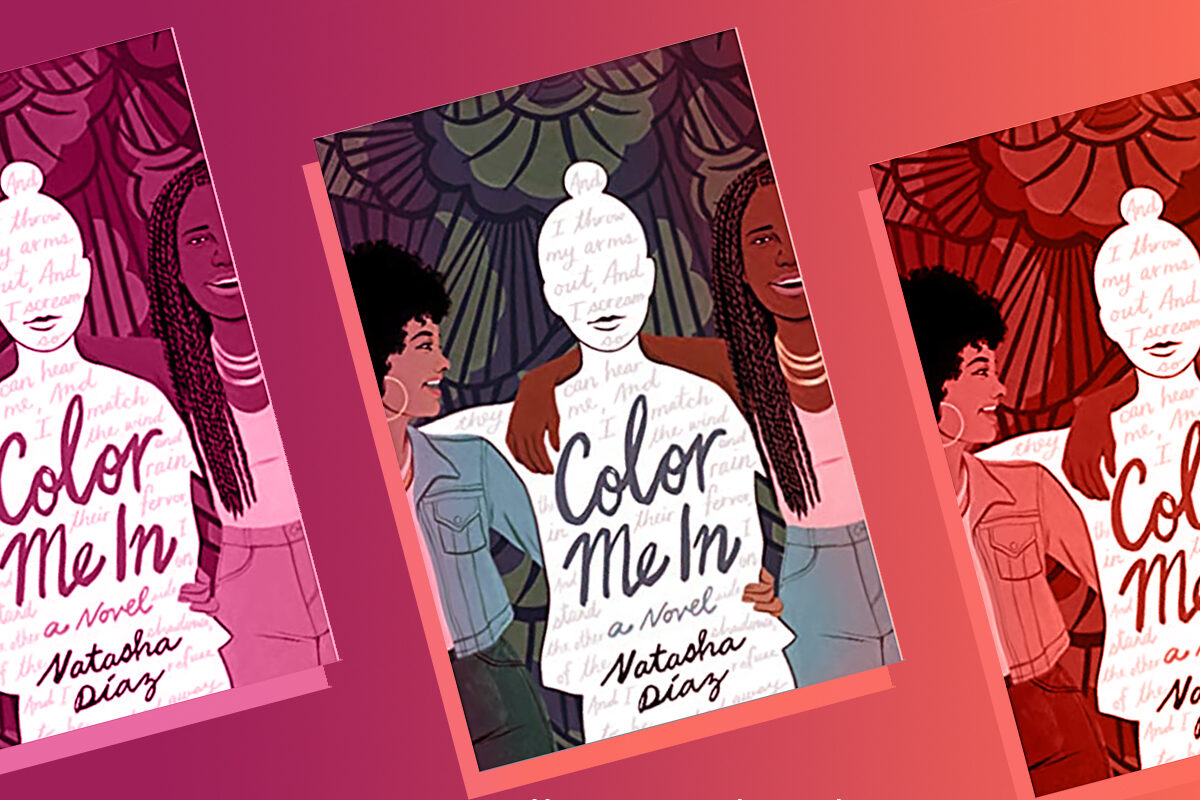 It’s hard not to be drawn to Natasha Diaz’s debut novel, Color Me In.  The beautifully illustrated cover features two figures flanking the outline of a girl, who is white and featureless, except for a faint outline of the words inside her, signaling, clearly, that this is a book about identity — about finding yourself, finding your voice.

Color Me In is just that — but also, it’s so much more. With beautiful, flowing prose, Diaz unfurls the story of 15-year-old Neveah as she grapples with her parents’ divorce and with her own identity: Neveah is white-presenting; her mother, the daughter of a Baptist pastor, is Black; her father is white and Jewish.

While Judaism was never a big part of Neveah’s life, following the divorce, her father insists that she have a bat mitzvah. She grapples to find herself — in her new home in the city, with her mother’s family, in her tony private school, and in the new Jewish space she inhabits, studying for her bat mitzvah with her rabbi, Sarah. Through the book, Neveah finds her voice — her literal voice as a poet as well as her voice to speak against injustice. But a truly important part of this book is about Neveah learning when not to use her voice.

Neveah grapples with her privilege as a white-passing person, as someone who grew up at a wealthy suburb who was given opportunities that others were not. She learns about when to use that privilege to quietly uplift others — not to center her own experience but to give space for more marginalized voices. It’s a process that many of us have been struggling with over the past few months, following the murder of George Floyd. It is not a comfortable or a finite process, and in her writing, Diaz does not shy away from that. It is truly illuminating going through that reckoning alongside a character as lovable and complex as Neveah.

When I read Color Me In,  which is out on paperback this week, I felt, more than anything, that I wished I had a Jewish book like this growing up. A book that is all about grappling with privilege, racism, anti-Semitism, consent, and misogyny. Remarkably, Diaz does this in ways that are both brutally honest and profoundly kind — all while weaving a seamlessly captivating story.

I wished that, as a kid, I had a Jewish character like Neveah to look up to and to grow with. It’s definitely the book Diaz, whose father is white and Jewish and whose mother is Liberian Brazilian and Black, wishes she had growing up, as she told me in a recent Facebook Live conversation. Diaz said she felt that so many books about biracial characters didn’t reflect her. She said the closest she felt to being represented was in James McBride’s The Color of Water, which tells the author’s story being raised by a single white Jewish mom.

After Color Me In was published, Diaz said she heard from many readers telling her they felt represented in books for the first time. While Diaz told me she was happy that they felt represented, it also underscored to her how little diverse Jewish representation there is in fiction — and how we need more books that reflect it. After all, Color Me In, while an incredible book, only reflects one experience of being Black and Jewish.

In this novel, the major Jewish characters reflect the beauty of Judaism. That includes Neveah herself who recites Jewish prayers with profundity as she claims her Judaism through her bat mitzvah. Her rabbi, Sarah,  is wise and compassionate and helps guide Neveah through a difficult year. The rabbi’s identity as a convert is a way for her to relate to Naveah’s feelings of being an outsider in so many spaces.

For Diaz, writing this book was an opportunity to reclaim with her Judaism in a way she didn’t feel like she could as a kid. “I wished that I had engaged more with the process of becoming a bat mitzvah. I did it because I had to,” she told me. “But I think it’s a beautiful tradition, there’s really powerful in a young person standing in front of their family and friends and community and really claiming their entrance into adulthood — and so this book was my chance to redo that.”

Color Me In doesn’t turn a blind eye on bigotry — including the bigotry that exists in the Jewish world against converts, patrilineal Jews, and Jews of Color. These negative interactions,  like so many of the experiences in the book, reflect some of Diaz’s experiences in the Jewish community, as patrilineal Jew and the daughter of a Black mother. Growing up, she said, people were “telling me that I shouldn’t tell anybody who mom is… I was asked to leave people’s homes when it came out that that’s what my heritage was. A boyfriend’s grandmother didn’t know I was Black and when she found out, she refused to have dinner with me again… Things like that… made me feel unwelcomed and like I couldn’t be Jewish.”

While it was painful to hear of Diaz’s experiences, it is also vital. We do not want any more people to grow up with pervasive racist microaggressions in the Jewish community — and confronting their existence, through this book and outside of it, is important.

So read Color Me In, and give it to your teens — first and foremost because it is a truly accomplished, wonderful Jewish book. But that’s not all: It is also the Jewish book that we need right now, as the issues that it tackles, are, unfortunately, even more pressing than they were when it was first published last summer.

Buy Color Me In on Amazon or Bookshop.org.