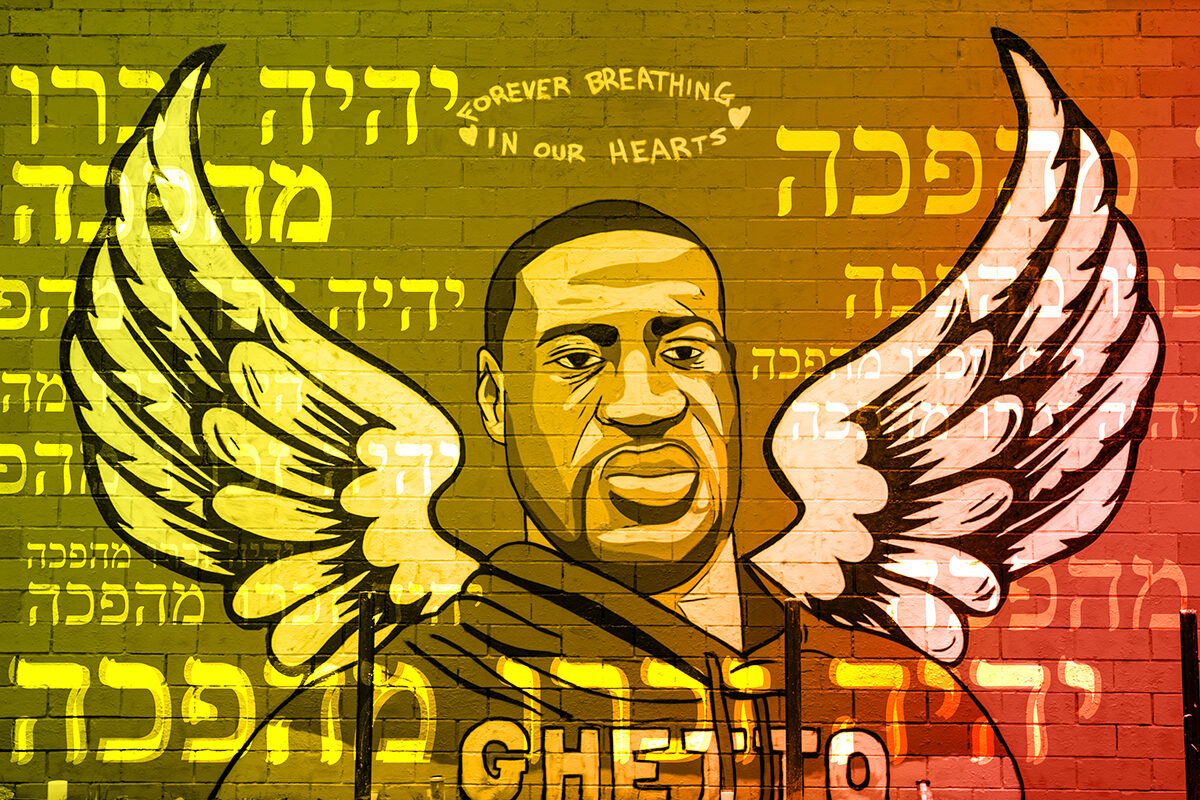 Editor’s note: This piece was originally published on June 12, 2020, as protests over the killing of George Floyd roiled the nation. We are republishing it because yesterday, April 20, 2021, former police officer Derek Chauvin was convicted of his murder.

From the quiet of my home halfway across the globe, my eyes are glued to my phone as I watch the protests unfold in the U.S. in the wake of George Floyd’s killing. As the names of slain men, women, and children pour through my headphones, I am instantly transported back to last May, standing under the blazing Jerusalem sun alongside hundreds of fellow marchers, mourners, and activists. A woman in the center of the crowd belts a long list of names into a megaphone.

The names belong to women as young as 12 and old as 91. Women from every sector, religious group, and socioeconomic class in Israel. Women who had endured beatings, rape, dismemberment, and all manners of unspeakable torture, sometimes before the eyes of their children. Trans women who had been made to feel so unsafe in their own bodies that they took their lives. Women who looked like me and my daughters, and women who didn’t.

All had been killed by domestic violence in the past year alone.

Their stories are as horrific as they are banal. They tell of a culture of silence, shame, and victim-blaming. They tell of police who are unresponsive and dismissive at best and complicit at worst. They tell of a government that is still withholding the NIS 250 million (approximately $74 million) budget allocated for implementing programs to mitigate domestic violence, even though those funds were approved years ago. They tell of structural economic disadvantages that keep these women from leaving their abusive partners. They tell of the myriad factors whose convergence stack impossible odds against our safety and survival in ways that are greater than the sum of their parts and which cut deeper than the harm inflicted by any individual perpetrator. This is systemic violence.

After each name and story is read, the crowd screams back, “Yehi zichra mahapecha” — “May her memory be a revolution.”

Traditionally, when someone dies, Jewish people say, “Yehi zichra baruch” — “May her memory be a blessing.” But here, in the context of domestic violence, the customary words ring incongruous and out of place. There is nothing blessed about the way these lives were ripped away from us. Their memorial calls for identifying and confronting the deep-seated conditions that gave rise to their murders, deliberately dismantling them, and then generating active justice in their stead.

In the context of Jewish law, remembrance is not a reflexive, passive process directed inward. Our sages teach that the way we fulfill the Torah’s commandment to remember the Sabbath — “zachor et Yom HaShabbat le’kodsho” (“remember the Sabbath day to keep it holy”) — is by active declaration in the performance of the kiddush, the Shabbat blessing over wine. We are commanded to remember the Amelikites’ brutal massacre of our people — “zachor et asher asah lecha Amalek ” (“remember what Amalek did to you”) — through intentional, public, verbal affirmation and by ridding the world of the evil that they represent. Neither of these Torah commandments can be fulfilled by quiet contemplation; memorialization must manifest through specific action.

This week, America buried George Floyd and the nation has erupted in his memory.

If we are to make the most of this moment, the Torah’s insights about active remembrance are as relevant and instructive as ever. As we memorialize George Floyd, Breonna Taylor, Ahmaud Arbery, and the countless other victims of systemic, anti-Black violence, now is not the time for silent reflection and unobtrusive mourning that stops short of implementing any fundamental change. For memory to mean anything, it must be active. It must be revolutionary.

This means deliberately rooting out the structural racism entrenched in our culture, economy, governance, healthcare, and justice systems. It means fighting bigotry in our own communities, even when that is uncomfortable. It means recognizing how poverty, disenfranchisement, and incarceration stack the deck against People of Color, and supporting the organizations that are doing the work of rectifying injustice. It means forging relationships and actively listening, not because of any transactional support the Jewish community may gain but because it is the right thing to do. It means taking the leap to look beyond band-aid reforms and instating creative, radically different models of power.

The movements for racial and gender justice are vastly different, with hurdles unique to each struggle and specific to the contexts and histories that birthed them. As a child growing up in Los Angeles in the late 80s and early 90s, my earliest political memory was the aftermath of Rodney King; later, as an Israeli immigrant-turned-activist, my most transformative experience has been confronting structural gender injustice in the Israeli Rabbinic Courts. In both these disparate situations, however, the most impactful change has always come from the bottom-up, from people who are first branded radicals, who are dismissed as angry, but who keep pushing through failure and heartbreak and setbacks because their detractors are never as loud as their consciences.

Last year in that Jerusalem crowd, raging and reimagining, I understood that memory does not merely recall a past but invents a future. I caught a glimpse of the revolution and it was us.

I pray we can truly honor and create the legacy of George Floyd, Yehi zichro mahapecha — May his memory be a revolution.