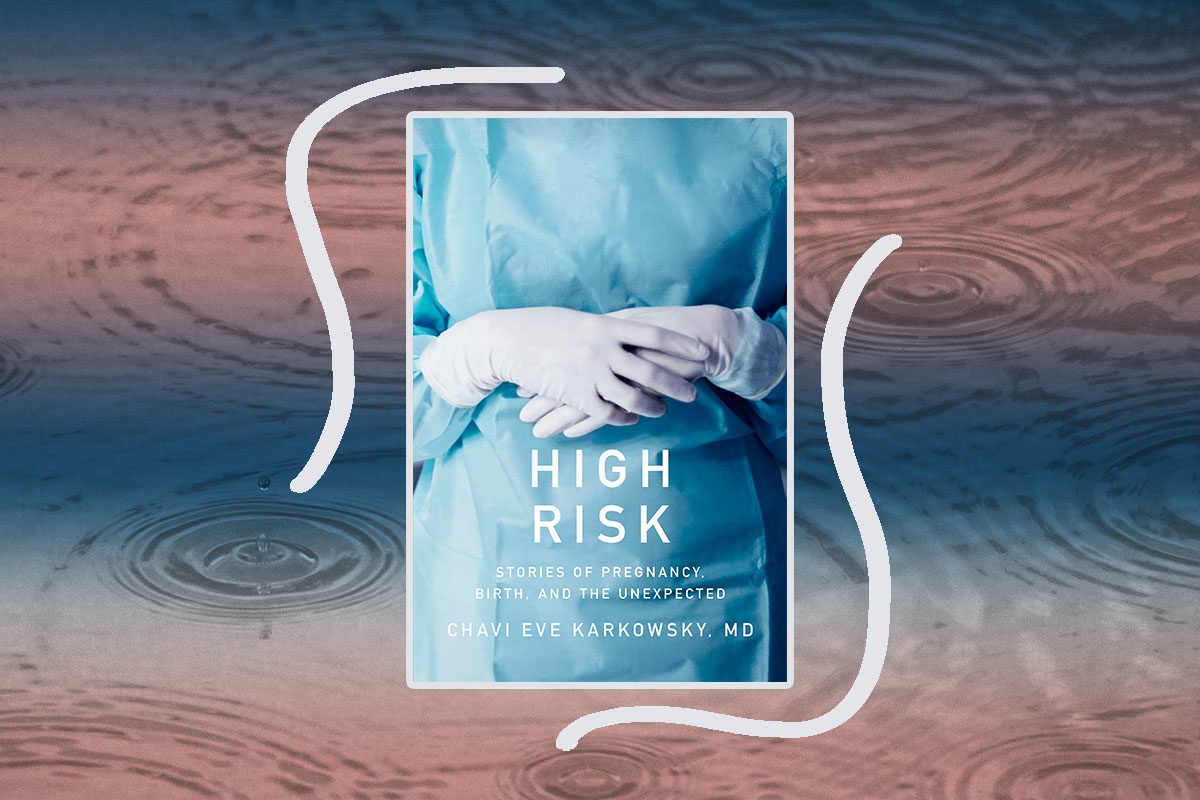 After more than three years of struggling with infertility, pregnancy and birth went relatively well for me, all things considered.

Yes, I was constantly nervous about losing the pregnancy, like I had the previous four. And yes, I was terrified when my 20-week anatomy scan had to be redone a week later — what a week that was! I was scared and when my labor, at 41 weeks, was changed into a C-section, a procedure I was completely unprepared for. But it wasn’t traumatic.

In other words, my experiences were nothing like the cases Dr. Chavi Eve Karkowsky, a Maternal Fetal-Medicine doctor (MFM), also known as a “high-risk” OB, has seen at the New York hospital where she treats mostly immigrants and underserved women of color. Now the MFM and journalist has written a book about those experiences, High Risk: Stories of Pregnancy, Birth, and the Unexpected that takes us inside the hallowed halls of a high-risk practice.

Since both Karkowsky and I have written “What to Expect”-type of books (I wrote about infertility; she about high-risk pregnancy and birth), I was excited to talk to the “actively Jewish and strongly egalitarian” mom of four. I was hoping she could tell me why I was so unprepared for my C-section, what she’s learned from treated underserved women, and how her religious practice helps her with her demanding job.

This interview has been lightly condensed and edited.

Why did you want to write this book?

As a doctor, I have access to a lot of incredible stories — they’re not the ones we see in the media or in novels. Like any other writer, I see compelling stories and think that they should be told.

I also see that lots of people — women, but also men — are still processing their pregnancy and birth experiences. People don’t know what to expect, but almost everything I talk about in the book is relatively common. Overall, the thing I hear most is, “I wish someone had told me.” And this book is trying to fill that need.

Do people really want to relive their own birth stories?

The thing I hear a lot is how lonely women are in their reproductive lives, from conception to pregnancy to birth and beyond. Everything I talk about in the book is relatively common: things like undesired pregnancy, diagnosis of anomalies, uncertainty of genetic testing, uncertainty of prognosis — those things happen all the time.

I joke that I ruin dinner parties all the time, not because I’m a terrible conversationalist, but people want to talk about their stories — how they weren’t given an epidural soon enough, or how they watched their wife bleeding and in pain, or they had to have a C-section. Men and women are not given an opportunity to process that experience: not the infertility, the conception, the pregnancy, the birth, and the postpartum. Some people said they didn’t want to read this because they feared it would be traumatic, but then they do and say, “I’m not alone in what happened to me, it’s so common.”

Speaking of oversharing and C-Sections, after I had one I was so surprised that I hadn’t been prepared for it, especially when the C-section rate is at about 30 percent.

Sometimes, there’s an agenda to childbirth education. They want to normalize what our bodies do — and how likely it is it will go well, and that we’ll have the natural birth most of us want  — and that’s important. But that leaves the up to 33 percent of women who need a C-section surprised and unprepared.

I’ve worked on curricula for birth classes that are more comprehensive, but telling people all the possible things that can happen is overwhelming and unfair. I also try to cover stuff that isn’t medical but is so important: how many support people are allowed in the room, why your baby might be delayed from your arms, and so on.

In general, I think we’ve not been good at understanding this [cesarean delivery] is a birth. For the medical world, keeping the patient [the mom] safe is the most important thing, but we’re getting better at keeping mothers and babies together during C-Section. We’ll get there.

You primarily work with immigrants — almost a third of your patients have translators — and the poor. How are their experiences different, from say, yours and mine, two Jewish middle-class moms?

It’s hard to access prenatal care in America. It’s hard to get an appointment; it’s hard to keep your job and take care of your toddler and get blood tests and get your prescription. If you have a medical condition like gestational diabetes, prenatal care becomes a full-time job.

We need to be more patient-centered about care. I can sit down and talk with a patient for 40 minutes, but maybe that’s not what she needs — maybe she needs a digital visit, or evening hours.

As a high-risk OB, you see some really difficult cases.

Your job sounds so hard. How do you deal with it? Does Judaism play a part?

Recently I just came off a hard week of service; I had hard conversations four times a day. When I went to shul after that week, my friend, a rabbi, said, “You look so sad!” And I told her, “Too much badness at work.”

What I tell my medical students is that you have to have perspective: People’s lives are really big and sometimes we’re seeing them in the middle of the story. Sometimes they come back and we get to see them with a healthy pregnancy. Knowing I’m often in the middle of someone’s story — rather than the end — helps.

You wrote the book while you were living in Israel, during which time you also worked at an ultra-Orthodox Hospital. What was that like?

We moved to Tel Aviv for two years for my husband’s work, and I worked with a lot of ultra-Orthodox women who have a different understanding of what a birth success story is — they really want to avoid C-sections because they want to have a lot of kids. They often don’t want diagnostic tests. And they also have a different understanding of reproductive autonomy, control over your own body.

Once, a woman came to me at 39 weeks pregnant and there wasn’t much fluid around the baby. I said, “I believe you should have an induction.” It wasn’t pre-term, it wasn’t a C-section — most women wouldn’t have a problem with this.

“Your husband?” I asked.

I was washing my hands in the corner thinking, I can’t imagine what it’s like to hand over control over your body, your pregnancy, your birth like that. At that very moment she said to me, “I don’t understand people who live without a rebbe.” The comfort she got from that structure was amazing.

You’re a mom of four, doctor to many, and an author. How do you do it all?

Well, I don’t cook and I don’t clean, and that really frees up a lot of time. I’d rather work another 12-hour shift than do housework!

But, listen, I’m incredibly privileged. My day job pays well and I have an incredibly supportive and committed partner. We have lots and lots of help. Still, balls get dropped pretty routinely and there’s a lot of scrambling on a daily or weekly basis, though somewhat less as my kids, who range in age between 4 and 11, are bigger.

Also, I wrote the book while we were living in Israel, and I worked 3 days a week, no night shifts and no weekends, which are a pretty constant part of my day job. Now that we’re back in the U.S., figuring out the balance is a new challenge, and one that I have to do fresh every Monday.