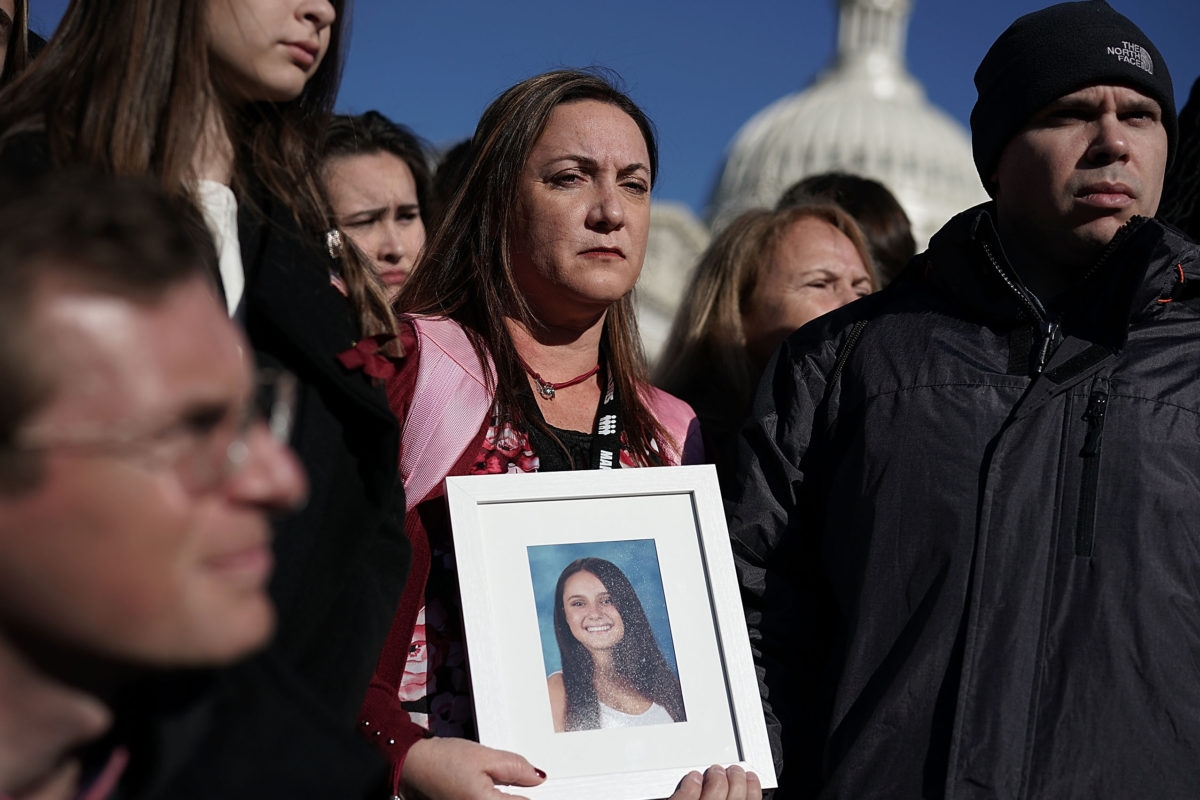 For as long as I live, I don’t think I’ll ever forget Lori Alhadeff’s impassioned plea the day after her daughter, 14-year-old Alyssa, was one of 17 students viciously killed by a shooter at Marjory Stoneman Douglas High school in Parkland, Florida on Feb. 14th, 2018.

In the CNN video, the Jewish mom looks straight into the camera. Her eyes and face are red but her voice is resolute: “How? How do we allow a gunman to come into our children’s school?” she begins.

Her words are worth watching in their entirety, but she ends her powerful speech like this: “This is not fair, our family, and our children, go into the school and have to get killed. I just spent the last two hours putting the burial arrangements for my daughter’s funeral, who is 14,” she said. “President Trump, please do something, action, we need action now. These kids need action now.”

It’s impossible to watch the clip without being shaken to the core. Alhadeff’s words are a window into the full human price of the epidemic of gun violence that plagues our nation. They also channel the anger and frustration that so many of us feel seeing one mass shooting after another, and knowing that our government officials aren’t doing anything to change this reality, aside from offering platitudes.

Working hard to #MakeOurSchoolsSafe so no one has to endure my pain. #makeourschoolssafe

Since that terrible day two years ago, Alhadeff is now a school safety activist and a member of the Broward Country School Board. In a phone conversation, I ask her how she found the strength to look into the camera and say such poignant words two years ago.

“On February 14th, up until the day of February 15th, it was 24 hours of the most pain-wrenching emotions and feelings of anything that I’ve ever been through in my life … ” she explains. “I found out that my daughter was shot and killed at school, and my range of emotion went from screaming pain to, then, the next day being very angry.”

After seeing her daughter’s body that day and planning the funeral, Alhadeff was seething. She knew students and community members were gathered at a local park, where media would be present. “And I went down the line of reporters and there was a reporter there … and he just handed me the microphone and I just spoke from the heart,” she says.

Her strength that day? Ultimately, she says, it came from her daughter. “I feel that Alyssa’s spirit and Alyssa’s strength lives  inside me and she empowers me to be able to have the strength to have a voice,” she says. “Alyssa is the one who drives me every day to believe in myself, believe that I can make a difference … and to know that if I can make and save one life of one child in a school by making our schools safer then it’s all worth [it].”

In the two years since the shooting, Alhadeff — who wears a heart-shaped pendant etched with Alyssa’s likeness — has internalized her own plea for action and placed the responsibility for change squarely on her own shoulders. Since she addressed President Trump via news cameras that day, she has met with him twice to talk about initiatives that make schools safer.

Alhadeff and her husband, Ilan, founded Make Our Schools Safe, a non-profit meant to do just that: make our kids’ schools safer through initiatives and legislation. She’s started initiatives in schools around the country, and passed Alyssa’s Law in her home state of New Jersey, which mandates panic buttons in public school classrooms, allowing teachers to swiftly communicate with police in case of an emergency. The law is also on is making its way through the legislature in New York and in Florida, where the Alhadeffs live with Alyssa’s two younger brothers. They’re also working on passing similar legislation on the federal level.

I ask her if she ever envisioned being in politics prior to the shooting. “I was probably the most unpolitical person before the tragedy but that’s probably why it makes me an open-minded elected official,” says Alhadeff of her role on the school board.

Unlike Fred Guttenberg — who has become a high-profile activist since his daughter, Jaime, was also murdered at Parkland — Alhadeff is not advocating for gun control legislation. Instead, she’s looking for measures that will specifically make schools safer. “It’s not a Republican or a Democratic issue,” she explains. “It’s about keeping our children safe when they go to school. I say I’m a school safety activist, and if I can drive change from my personal tragedy then that’s something I’m going to do.”

I ask Alhadeff how her family is dealing with their grief, two years on. “I would say that we’re living and surviving and working every day to honor Alyssa’s memory,” she says. “After the tragedy, we got a dog, Roxie, a Goldendoodle and she really brings a lot of joy to Alyssa’s brothers and my husband and she really helps us with our healing process.”

Alhadeff is working on adding more safety features to schools, from bulletproof glass to the aforementioned alarms. “We need to focus on creating a culture of safety within the school and empowering our students to make our schools safe,” she says. “We have clubs — Make Our Schools Safe clubs, which empower our students to work with the principals and administrators of their schools and drive that culture. If our students feel comfortable to feel something and say something, then we are going to prevent things from happening.”

“It’s important to have reporting apps where they can report something anonymously,” she adds. “We had an example, a Marjory Stoneman Douglas student reported something, they were going to attempt suicide. We were able to get that student the help they needed before they did that.”

While it’s important to have schools, kids, and local authorities all on the same page, Alhadeff says, safety starts at home. “Parents are the first line of defense — that means they need to be present in their child’s life,” she says. “They need to have the password to their child’s phone and watching all their social media and knowing what their child is posting and doing.” She adds that parents should check their kids’ backpacks for weapons or drugs.

Alhadeff had encouraged Alyssa — who was a friendly teen and a gifted soccer player — to live life to the fullest. “I was her personal assistant,” she jokes. “I was literally at her beck and call every second.”

“I’m happy and thankful that I did this for Alyssa,” says Alhadeff, breaking into tears. “She was able to live a full life within those 14 years. I told Alyssa, that because she was a freshman in high school, that she should experience everything … Whatever she wanted to do, I said yes. I’m happy that I was always there for her, to enable her to have all these opportunities in her life.”

Until the changes Alhadeff advocates are made nationwide, she says the most important thing parents can do regarding their children’s safety is to be present with them. “Before we had cellphones and social media we actually talked to our children, we spent time with them, we had dinner with them,” she says. “Nowadays, we’re so engaged in our phones, and our lives have become so busy that we lose the focus of these traditional family values of spending time with our kids, riding bikes with them. And as I know, that can be taken from you in a second.”