This Rabbi Wrote a Hanukkah Country Song and It's Good, Y'all – Kveller
Skip to Content Skip to Footer 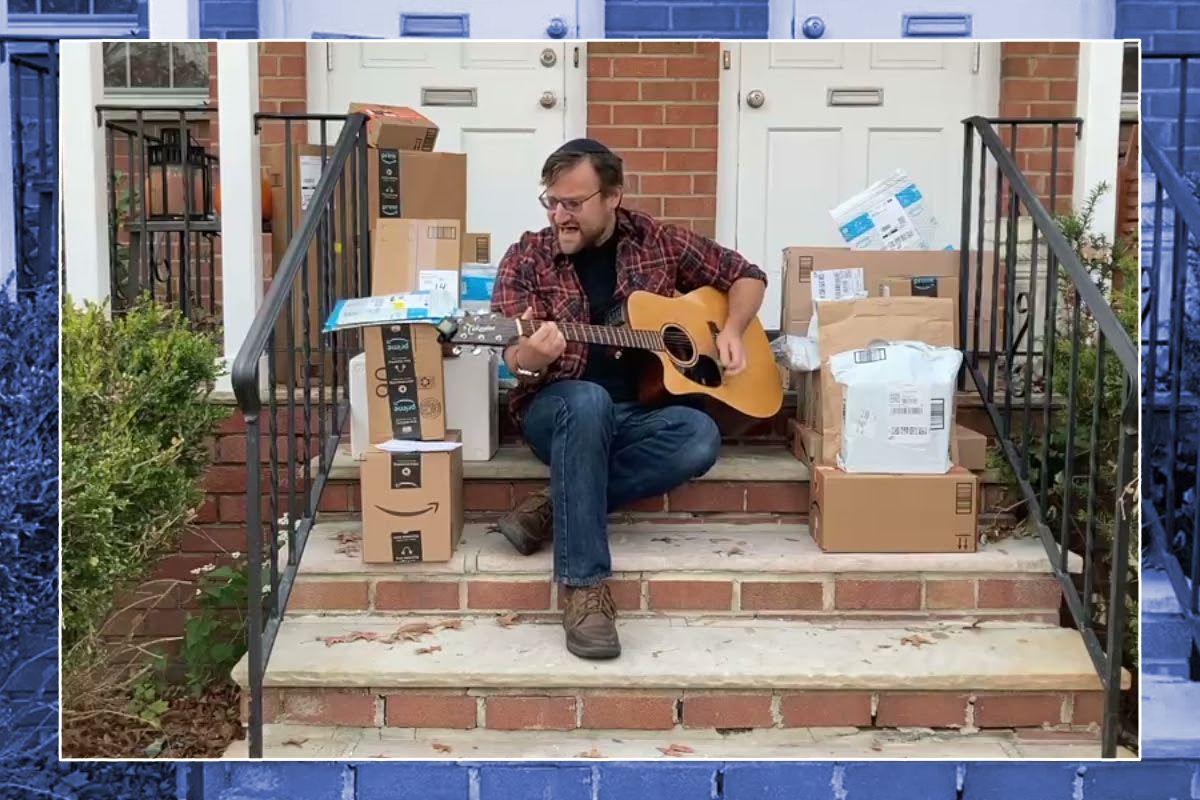 I just came back from spending my Thanksgiving with my husband’s Jewish family in Tennessee, the birthplace of country music, only to find a country jam in my inbox — a Jewish country song, no less — created right around the corner from me in my neighboring state of New Jersey. And my friends: It is quite good.

“Tea Light Candle” is a Hanukkah-themed country song written by Rabbi Jesse Shore. Shore, 34, shot the video for the song on his front porch in Tenafly, New Jersey. While the quality of the recording is not as crisp as one may be accustomed to, the babbling of Shore’s 2-year-old and his little cousins in the background do add some charm to the song, which the Jewish dad wrote at midnight at a local Dunkin’ Donuts (quite an appropriate location to write a Hanukkah song, if I do say so myself).

“Tea Light Candle” is quite different from many of the Hanukkah tunes we hear around this season. It won’t tell you how to play dreidel or remind you of the plot of the Hanukkah story. Instead, it’s a Hanukkah-related critique of holiday consumerism, continuing the tradition of social commentary that has long been a (somewhat controversial) part of country music — from Johnny Cash to the Chicks.

“I wanted a song to be more meaningful than a face-value description of what we do and why we celebrate Hanukkah,” Shore explains over e-mail. “I also wanted to be OK with a song that would challenge its listeners and wasn’t happy all the time.”

Shore sings about driving his truck down to Target to get Hanukkah gifts, seeing giant 20-feet-tall menorahs at the mall (across from the Gap), keeping Amazon in the black and waiting for Black Friday. “I consume in a blaze too hot and too bright,” he admits in the song, “when I could just illuminate like candlelight.”

The chorus reminds us that we don’t need a fancy gold menorah to bring joy and light into our homes: “All I need is a tea light candle,” Shore sings, “nothing more than my wallet can handle.”

Shore tells me he was inspired to write this song by a speech Rabbi Jeremy Wieder gave at Yeshiva University, “critiquing how we’ve made living Jewishly very expensive.” And it is, indeed an illuminating (pardon the pun) reminder that while there is more Hanukkah merch out there than ever before, we don’t really need it to have a bright and meaningful holiday.

In the video, Shore is surrounded by Amazon packages on his front porch and even has a delivery man interrupt his song to deliver yet another one (and shoot a picture of the rabbi singing). But it’s not all exactly as it seems: The “Amazon packages are intended to underscore our living in material excess, but in truth, they are ironically deliveries from a toy drive my wife was running for children at her foster care agency,” Shore professes.

Like many people of his milieu, Shore wasn’t always a fan of country music. “For years country music has been a bit of a taboo for me,” he says, “and hearing comedian Bo Burnham’s satire of how superficial it has become and his suggesting how it’s part of a culture of antisemitism definitely didn’t help.”

“My love for country music started three years ago working as a community rabbi in Toronto,” Shore continues. “I’d often have to drive long distances so I was a captive audience to the radio and the country station was on. The taboo of country music was countered with music and lyrics that often resonates with my Jewish values, like appreciating our heritage, working for something bigger than myself and being able to enjoy the little things in life, like friends getting together or a cold beer (I don’t drink beer, but I get it). Eventually, I found out that country music is a guilty pleasure for a lot of people I knew!”

And so, after New York City’s only country radio station went off the air this October, Shore, a founding member of YStuds, who in the past has performed with Jewish groups like The Maccabeats, Shir Soul, Six13 and Pella, decided to write his own country song.

Shore is not the first to bring country and Judaism together — we’re big fans of the Jewish bluegrass band Nefesh Mountain. But this surprisingly excellent song definitely is a reminder that Jewish country music can be a really great thing — and we need more of it!