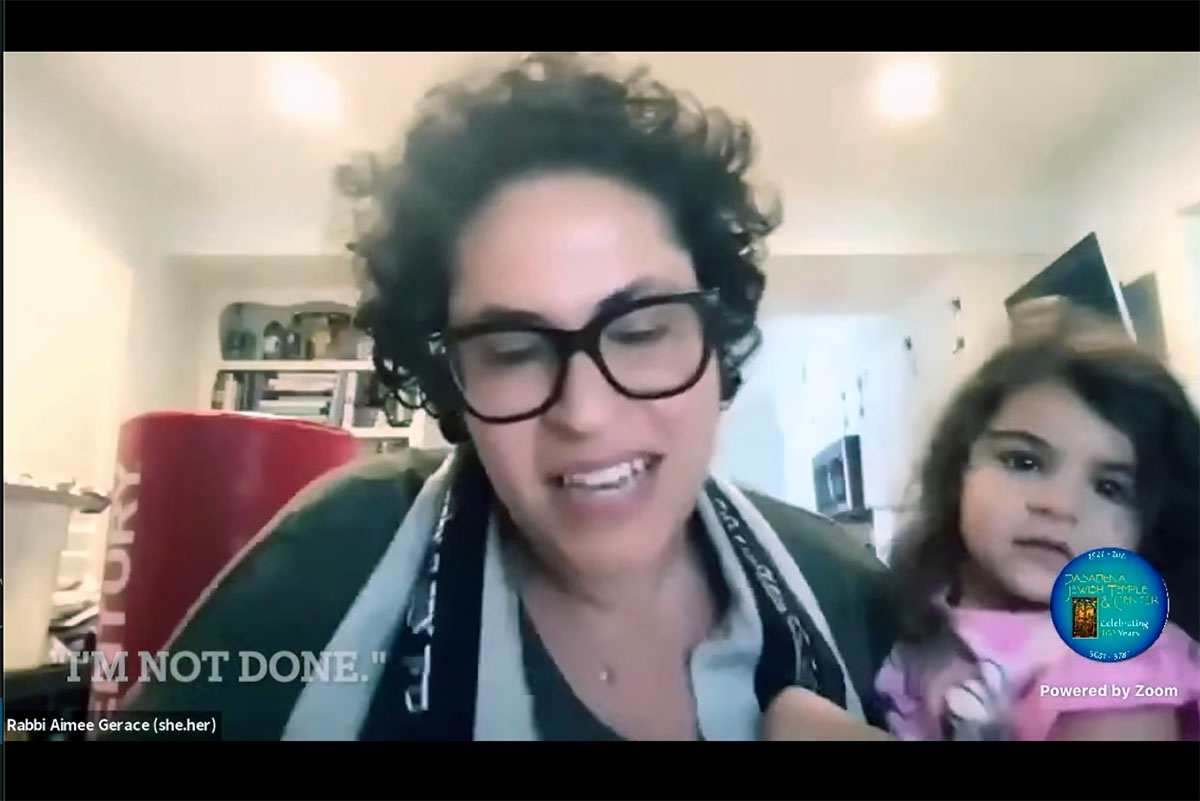 Earlier this month, Rabbi Aimee Gerace, the education director at the Pasadena Jewish Temple and Center and a mother of two, was interrupted by her toddler during a work meeting on Zoom. That’s practically a daily occurrence for many of us — thanks Covid-19! — and, admittedly, for Gerace, too. (“Both of my children interrupt me often — they just want to see what I’m doing and what they can get away with,” she professed to Kveller).

Except that, this time, it wasn’t just a regular work call — Gerace was live-streaming Rosh Hashanah services to her entire community when her 2-year-old decided to kick up a fuss.

What happened next is a familiar sight for a lot of working parents during the pandemic — Gerace has to adapt and multitask. But how she does this is very admirable, and quite diverting. Since this was a recorded service, we can watch the highlights of how she juggles the demands of work and parenting in real-time. How lucky we are!

Since she’s immunocompromised, Gerace found herself this High Holiday season chanting the haftarah from the safety of her own home. Her daughter, Amalia, who attends Jewish preschool, and was home as well. (Her 6-year-old son, Carson, was at school).

“Normally during important moments like this, I give her everyone’s favorite babysitter, the iPad, and she is quiet as a mouse,” Gerace explained. “Of course, as soon as she heard me start to chant (two rooms away), she decided it was time for a visit.”

As Gerace chants, Amalia yells, “Mommy, Mommy are you done?” and climbs on her lap — which, let’s face it, is basically the life of every toddler parent during the pandemic — except Amalia at least has the grace not to close her computer.

“I’m not done,” Gerace chants in response with a look on her face that you might find familiar.

When her daughter tries to snatch the text she is reading, she calmly chants back, “I need this.” She offers her daughter candy — which of course, she has on hand for moments like this (emergency candy is a must-have for all parents!). “I’m going to keep chanting” she chants toward her screen as she grabs and unwraps a Starburst for her little one.

When the toddler still isn’t placated, she brings out the big guns and tries to offer her milk — a task that requires a trip away from the dining table, where she works, and into the kitchen. But Gerace doesn’t abandon her post or stop chanting — she merely relocates. “You’re coming with me,” she chants to her congregants, as she grabs the computer and walks it to the kitchen counter. As she does this, she almost drops her text on the ground — but catches it with a sheepish “gotcha” and mutters to herself and everyone watching, “This is so much fun.” (Which, as we all know, is anything but.)

Frankly, by this point, I would be on the verge of frustrated tears. But, through this entire ordeal, Gerace keeps her composure. She even musters a smile as she finds her place back in the text. From there, she just keeps trucking, mixing in a chant of “here’s your milk” with the ancient Hebrew text.

Gerace gets through the entire haftarah and is greeted with a hearty “amen” from her fellow Pasadena Jewish Center colleague, Rabbi John Carrier, who says: “I have never seen such leadership with composure, and I wish I could call this out as a heroic moment but for Rabbi Aimee this is just a day that ends with ‘y'”

He adds: “They say every rabbi should have a rabbi and I couldn’t do better than having Rabbi Aimee as one of mine.”

“This is one of millions of pandemic work from home situations that just happened to be caught and recorded,” Gerace wrote on Facebook, adding a validating message for all of us: “If you have been working from home and are under the rule of tiny despots (human or otherwise) that demand your attention: You are seen, you are loved, and you are killing it.”

She also admitted that re-watching the video brought her to tears — but not out of embarrassment or parental strife. “I cannot believe this has been my (and countless others’) norm since March 2020 AND IT DOESN’T HAVE TO BE THIS WAY,” she wrote, urging anyone reading to get vaccinated and continue wearing masks (amen!).

In addition to the stressors we are all facing, Gerace has spent the pandemic battling breast cancer as a BRCA carrier. The Jewish leader had a lumpectomy, underwent chemo, and then a mastectomy and reconstruction in July. The ordeal has been intense, Gerace concedes, but it “also gave me an opportunity to exercise resilience that I didn’t know I had,” she said.

Still, the challenges of pandemic parenting have been fraught: “My kids have a really hard time understanding that just because I’m at my desk in the kitchen doesn’t mean that I’m available to play with them,” she said. “My son, Carson, has told me numerous times that he wants to break my computer because I’m on it so much. Those conversations are so heartbreaking to have.”

“I feel like I’m doing a medium job as an educator and a medium job as a parent because the two bleed together so often,” she adds. (Honestly, it’s fair to say that a lot of us feel exactly the same way.)

Fortunately, Gerace sees a silver lining: “I know that at the end of the day, my children are learning that serving a community and Jewish education are two values that I hold very dearly,” she said.

It’s obvious that her Jewish community sees that as well — and now we get to see it, too. Kol hakavod, Rabbi Aimee!