We Call Our Jewish-Italian Baby ‘Pizza Bagel.' Choosing Her Real Name Was Harder. – Kveller
Skip to Content Skip to Footer 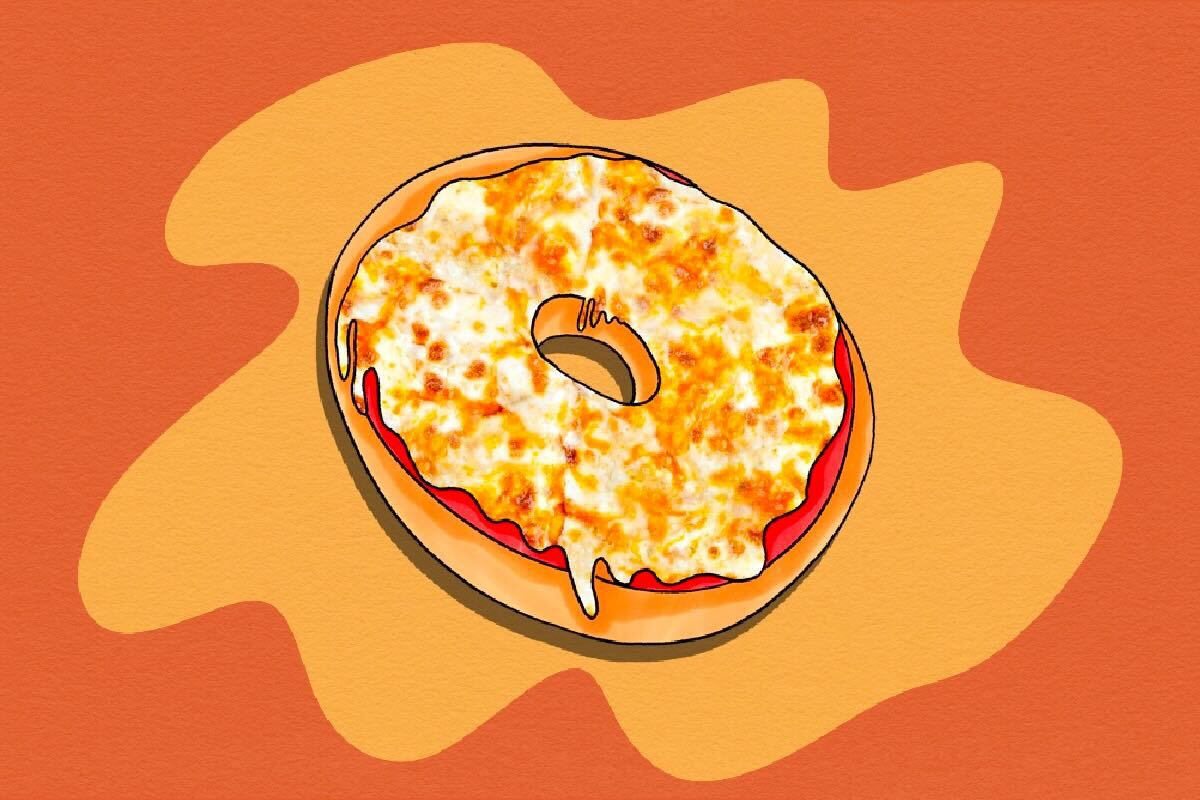 As a Jewish woman married to an Italian man (who is now a Jew by choice), I never thought we would have cultural clashes. After all, as the saying goes, Italians are just Jews with better food. Our families are both loud and opinionated, our mothers both fluent in guilt, and whether it’s pasta or bagels, we appreciate a good carb.

We marveled at the beauty and history of Israel on Birthright and ate our weight in pasta in Firenze on our honeymoon. Our olive skin, distinctive noses and dark hair meant that at the Festival of San Gennaro and at B’nai Abraham we could pass as Italian or Jewish on any given day. For many years we basked in the duality of a Jewish Italian love. And then we got pregnant.

As with many young couples, seeing that blue positive line for the first time filled us with happiness, joy and nerves. But it also presented a whole new host of issues. Questions started to arise quickly after the oohing and aahing over the ultrasound ceased. Will we get our daughter baptized or let her “live in her sin?” Can I name her after a relative I love who’s still living? What happens when she tells her cousins that Santa isn’t real? But none of these questions would prove to be as controversial or difficult as naming our little pizza bagel.

The first name was easy. Like most 30-somethings in a committed relationship, I had a list on my notes app of names I heard and liked. We went through the list together and agreed quite quickly, settling on an old fashioned, traditional first name with a French origin. “What about her last name?” I asked my husband. “What about it?” He responded.

My last name is supremely and indisputably Jewish. It does not get more Jewy than Bernstein. My husband’s last name, in contrast, may as well be Buddafoco. It reads like a “Sopranos” character. My husband argued our daughter should use his last name because “that’s what people do.” (Hello, patriarchy!) I really struggled with that reasoning, partly because I never changed my last name. In retrospect, I should’ve anticipated this argument because we had a similar one before we were married.

I didn’t take my husband’s last name because I felt that I’d accomplished so much under my “maiden” name. I graduated undergrad, was accepted into an elite national service program, started my career and completed my Master’s degree —  all as a Bernstein.  Changing my name also felt like hiding my Judaism, which I am so proud of. If I had taken my husband’s name, when people scanned a list, they would think I was Italian. Therefore, it made sense to me that my daughter would be a representation of both her Italian and Jewish heritage, in the flesh and in name.

So I did what us Jews do best: I argued. What if Bernstein was her middle name? No. We want her to be a strong, in-your-face feminist. With you as her mother, she still will be. Well, Judaism is a matrilineal religion so she’s basically a Bernstein anyway. You’re reaching. We were at an impasse.

For weeks, I would pair our daughter’s first name with Bernstein. Mostly to irritate my husband, but also to try and get him used to the idea. It made him even more adverse. The dam broke one day when we were signing my unborn child up for our local Jewish day school. When filling out the forms, I wrote her first name and begrudgingly wrote my husband’s last name. I had a visceral reaction. Seeing his Italian last name on forms with a big Star of David on top didn’t feel wrong, but it felt incomplete. In giving my daughter only his name, I was telling half the story. It felt as though I was erasing or denying her Jewish identity. I left the school with a heavy heart, having submitted the form with only her father’s last name.

That night, we had it out. I wish I could tell you that we gently recognized and validated each other’s feelings and came to a compromise. But, hey, we are Italian Jews, so we loudly and fiercely debated our sides. We yelled and gesticulated. We were exhausted, frustrated and dug in. According to my husband, there was “no halfway point between Staten Island and Jerusalem.” But our people both thrived in Brooklyn, I argued. There must be a solution.

Enter: the hyphen. I had done some research (AKA intense googling) on double-barreled, or hyphenated, surnames. I learned this practice started in the 15th century and continues within many families today. In many Latin traditions, for example, families take the last name of both the mother and the father. In German tradition, this is sometimes called an “alliance name.” My husband didn’t hate the idea right away, but he didn’t love it, either. What about standardized tests? Our pizza bagel will have to shade in so many bubbles, he argued. What about if she gets married? Will her name go on forever? That will be her decision when she comes into her full identity and can rationally and maturely make that choice, I responded. And, hey, before kindergarten she’ll be VERY familiar with all of the letters in the alphabet. After hours of fierce debate, he conceded and we shook on it, a moment that conjured up images of Reb Teva giving his blessing and permission in partnership with an Italian mob’s level promise.

Our little pizza bagel was born in 2019. We filled out the birth certificate with her hyphenated last name and have not looked back. On Friday nights, she says the Motzi and munches on challah, and by Sunday, she is slurping up macaroni with homemade gravy and meatballs. Our toddler exclaims “l’chaim”” and “salud” with equal fervor. She dances the hora and can belt “Luna Mezzo Mare” with the best of them. Our daughter is Jewish and Italian, and her name is, too.