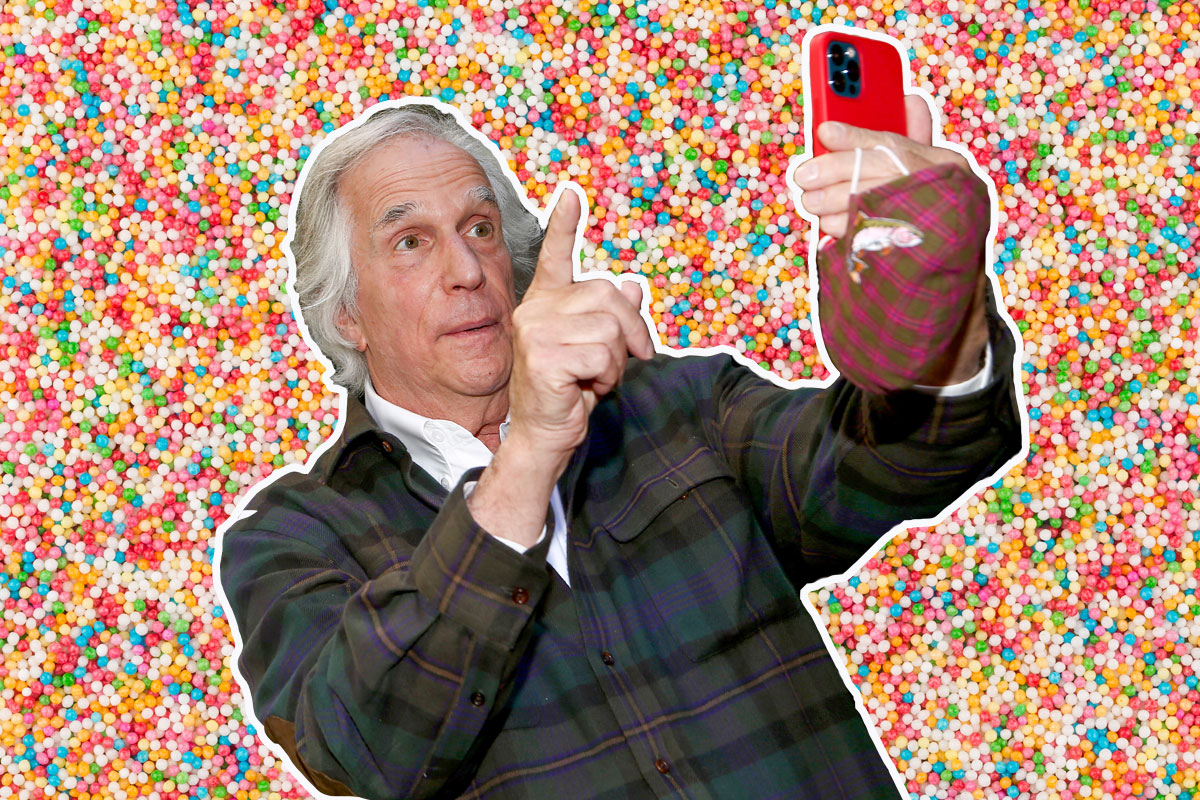 Our love of Henry Winkler is no secret. We most recently covered him for two iconic grandparent roles: As Zayde in the “Rugrats” reboot, and then as, well, himself, going viral  on TikTok dancing with his grandkids.

Despite being in the public eye for 40 years — first as the Fonz in “Happy Days,” and more recently with roles in “Parks and Recreation” and his Emmy-winning performance in “Barry,” Winkler’s viral TikTok seems to have helped propel him into public consciousness as America’s beloved Jewish grandparent.

And now we have proof Henry Winkler is just as wonderful as he seems. He was recently a guest, with his daughter Zoe Winkler Reimis, on The Puberty Podcast, where he talked about his parenting and grandparenting. The Puberty Podcast — hosted by Jewish mothers Vanessa Kroll Bennett (writer, entrepreneur and, yes, Nick Kroll’s sister) and Dr. Cara Natterson (the pediatrician who wrote the updated “The Care and Keeping of You,” American Girl’s classic “body book” for girls) — aims to help parents by removing the stigma from talking about all aspects of puberty and growing up.

On this particular episode, Zoe talked about growing up with Winkler as a parent, how she and her father ensure their kids have a special grandchild-grandparent relationship and Winkler’s grandparenting takeaways.

After listening to the episode, we’re even more obsessed with Henry Winkler. He ends the podcast by sharing an incredible grandparenting takeaway — “Listening, not judging, and being amazed by what you hear” — and everything else he says has us wondering if he could adopt us as a grandchild. Here are some highlights:

He fostered an environment of openness as a parent.

Zoe says her parents, Winkler and his wife Stacy, had one rule in their home when she was growing up: If you told the truth, you didn’t get in trouble.

That doesn’t mean Winkler wasn’t strict, though — “I was called Mr. Stricty,” he remembers. Zoe says she was grounded often, and remembers Winkler pulling their landline out of the wall and hiding it from her. But he rarely yelled, and Zoe remembers feeling respected.

“I was always allowed to plead my case and say why I didn’t deserve the consequence,” she says. “We had a very open dialogue.”

That dialogue included opening up when she lost her virginity. Not long after it happened, Zoe recounts, her boyfriend wasn’t calling her back. She told her dad about it — while they were at a performance of a Russian folk ballet. “And he tells me, a leopard never changes its spots.”

He is respectful of his daughter’s parenting choices.

Grandparents are notorious for breaking house rules, often to their grandkids’ great delight. When asked if he’s ever broken one of Zoe’s rules, Winkler says, “Before I do, I call Zoe and ask her if it’s alright.” He pauses. “And then I take Ace to McDonald’s.”

“In structure comes freedom,” Winkler says wisely, “and Zoe is very clear about the boys. I’d like to stay within Zoe’s vision for her own children.” He then gives his daughter the kind of parenting praise that feels like the highest compliment but seems entirely commonplace in their relationship. “She and Rob are extraordinary parents, they are great listeners which I believe is the beginning and the end.”

He connects with his grandchildren when he’s not around.

One of Zoe’s son’s is, as Winkler describes him, a “unicorn of a child.”

“He only wants to play with Barbies,” says Zoe. “He sometimes comes to dinner…in a full dress and headband and wand, and sometimes in shorts and t-shirt.”

Her parents, she says, never batted an eye.

“You get on the canoe and paddle down that river,” Winkler says of being a supportive grandparent to a child whom the outside world may see as different.

And when other grandparents handle similar situations with less acceptance? It makes him worry about what his grandkids will experience.

His advice to other grandparents is perfect.

When asked what advice he would give to other grandparents, Winkler offers “What do you want from your relationship with your grandchildren? Do you want to be stern and build a wall, or do you want to be observant and have the best time of your life?”