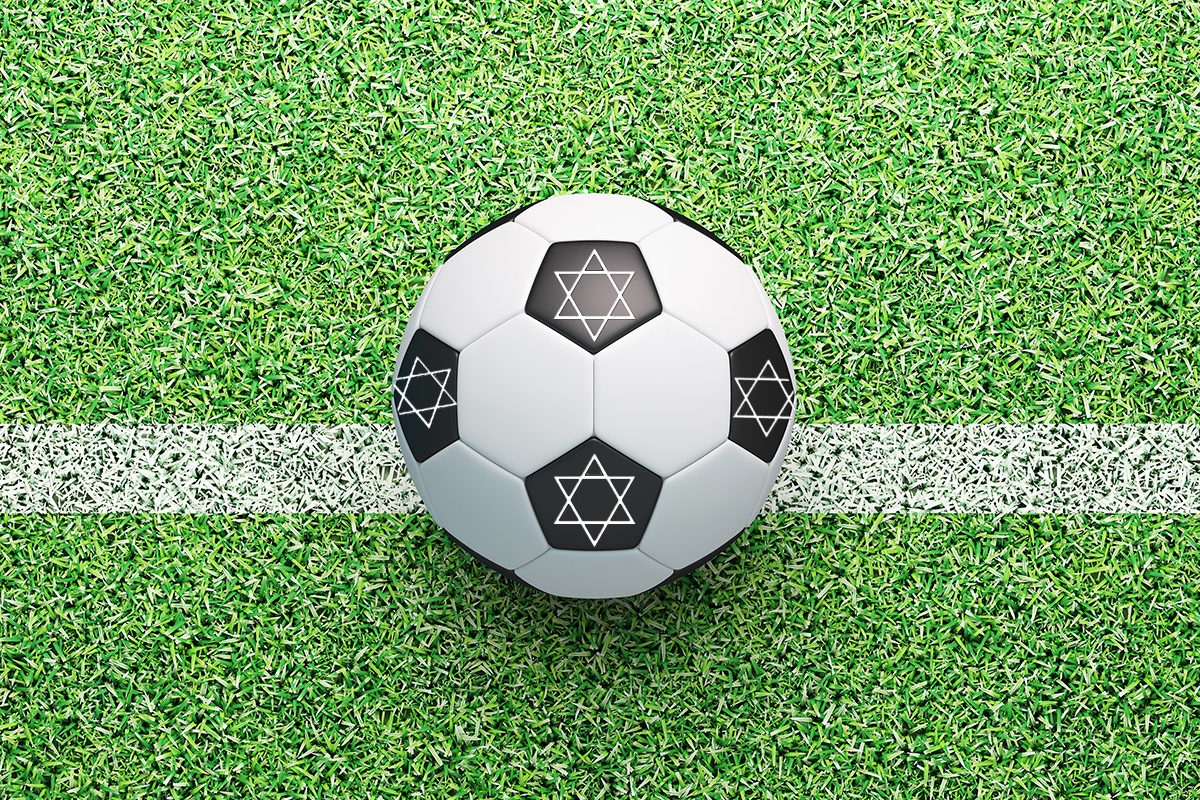 You might think that being a Jewish soccer mom is no different than being, say, a Christian soccer mom or a Buddhist soccer mom. And, in some ways, you’d be right.

But I’ve recently realized that there are some unique challenges for Jewish families when it comes to raising soccer obsessed kids. Take one recent Sunday, when my 10-year-old stepson, Yair, was so involved in a soccer game that he seemingly lost a shin guard while playing on the field — or, more likely, he was so eager to play that he didn’t even notice that he wasn’t wearing it in the first place.

The following week, when I found his missing shin guard in the lost and found at our synagogue, I realized that his dream to be a professional soccer player was on a collision course with our plans for him to become a bar mitzvah. It’s a sticky situation, and it’s going to become even more difficult as his 13th birthday approaches.

Here’s the situation: Nearly every week, we are forced to choose between soccer and Jewish activities. Yair’s soccer often coincides with Hebrew school, Sunday school, or Shabbat services. And he is hoping to move up into his soccer league’s premier traveling team, which means even more practices and more time away from synagogue. Just how much time he plays in a game is largely dependent on whether he attends all his practices and is on time. As such, for several weeks this spring, I had to pull him out of Hebrew school early on Wednesdays in order to make it to his practice on time.

But that’s just the beginning of it — sometimes, his games are on Saturday morning, coinciding with Shabbat services, and sometimes they’re on Sundays before Sunday school is finished. Sometimes, we are lucky and his game is in the afternoon. More often than not, however, it’s a juggling act; the games are typically in the morning and can be as far as a six-hour drive away. This means that most weekends, we assess what Yair can miss — be it a game or a Shabbat service or a Hebrew lesson — and, if soccer wins that week, who will drive him to the game.

Fortunately, Yair is good at Hebrew. He’s on track with what he’ll need to know for his bar mitzvah, but still, we have to choose: What can he miss at synagogue? What should he miss from soccer?

It will be even more challenging in the months leading up to his bar mitzvah, as his nearly 13-year-old brother, who is also obsessed with soccer, is learning. He has to attend all Friday and Saturday services in the three months before his big day. We, the collective we, will have to force a choice between becoming a bar mitzvah and playing in all of his soccer games. It is not a real choice, not in our family — ultimately, the bar mitzvah takes precedence. The synagogues’ expectations are too high, the social pressure to become a bar mitzvah too great.

Still, we worry: Will he start to hate being Jewish if it stands in the way of his potent dream of being a professional soccer player? Will he never come back to synagogue after being strongly encouraged — some might say required — to miss soccer in order to go to services the year of his bar mitzvah?

Why are we forcing this choice, or making it so that playing in every soccer game is not even an option for Yair? It is a good question — one that I have thought about a lot in the last year. I am a convert to Judaism; I grew up Mormon and there were Sunday basketball games and Sunday swim meets that I couldn’t participate in. My teammates were not happy and I was sad to miss the events but, at the same time, I felt proud of my connection to family and church. I knew my family and my religious community had my back — they loved me, they celebrated me, and they wanted the very best for me. Missing Sunday events was part of the price of that loyalty, and part of being in that tribe.

I know that my childhood experiences are very different from Yair’s. At the same time, he is proud of being Jewish. He descends from a line rabbis who value the observance of Judaism, particularly because of how it builds character and develops community relationships. So with Yair, we try to focus on what he gets out of going to synagogue: friendships, a connection with his heritage, a connection with God and Torah, and hopefully some joy and grounding in a good life. He gets some of these things from soccer, too — how to be a leader, grace in the face of winning and losses, camaraderie, a sense of belonging.

Right now — and especially according to Yair — the list of soccer benefits seems longer. But we also have to think about the future, and what these choices mean: What will make him a better man in this nuanced and complicated world — going to every soccer game or every Jewish event?

For now, at least, some of the questions are still in the future. And the other week, Yair’s missing shin guard mysteriously turned up in the synagogue’s lost and found. I say “mysteriously” because, even though I knew it was lost, I never expected to find it there. It almost felt like it was transported there, symbolizing both the divide and the connection between synagogue and soccer.

The day the shin guard was lost was much like any other: I picked Yair up early from Sunday school. As I’m driving, a flurry of questions escape my lips: “Are you ready? Do you have your soccer cleats and shin guards on? Is there a water bottle back there?” As Yair changes into his uniform in the backseat, I am reminded that all these decisions are being made by and for a kid who is still too small to sit in the front seat of the car. “Did you finish the kosher hot dog I brought for you as a snack? Did you take off your kippah?” It wouldn’t be the first time he had run out onto the field still wearing it.

Adrenaline is rushing. It is a hurried transition from the meditative, quiet of synagogue to the bustling exuberance of a youth soccer game.

Yair is a good player on his team, and they especially need him today, as a few players are absent and they don’t have any substitutions. Yair makes a great assist and his team wins 7-2. When Yair finds out a couple of other boys are staying to play in the next game, so that the team will have some substitute players, he begs to stay and play.

“OK,” I concede. He quickly eats a granola bar and rice crispy treat from the car and is back on the field playing 30 minutes later.

His team wins again. The boys are all happy. As he comes off the field, he says, “One of my shin guards came out of my socks.” It was puzzling — just how does that happen? We look everywhere, walking up and down the field, asking other players and parents if they have seen a lone shin guard.

We can’t find it anywhere, so later we buy him a new pair of shin guards. But then, the following week, the missing shin guard turns up in the synagogue’s lost and found. It was discovered by security in the parking lot.

Apparently, he played two games with only one shin guard. But I have to imagine that one shin guard was on duty, showing how much he cares about soccer, while the other one slipped away and sat quietly in synagogue.

21 Jewish Facts About ‘Friends’ You Should Know

The Best Purim Kitsch You Can Buy on the Internet

Mila Kunis Shares How Her Family Does Shabbat

Amazon's 'Hunters' Is Super Jewish and Worth Your Time