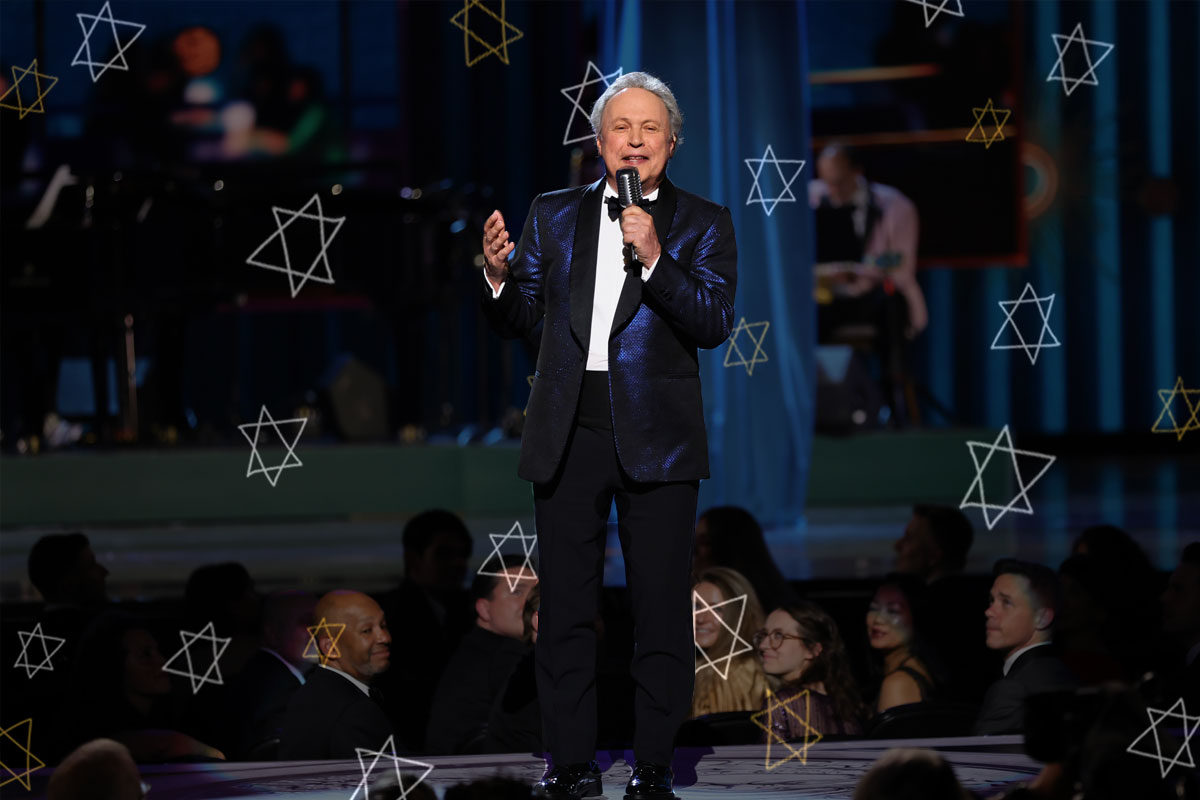 “Ella Fitzgerald, wherever you are, I apologize in advance.”

Billy Crystal gave this year’s Tonys a jolt of Jewish shtick when he coaxed the audience into a call-and-response “Yiddish scat” routine, as part of a live performance to promote his Broadway musical, “Mr. Saturday Night.”

In a good-faith mockery of Fitzgerald’s own famous “scat” routine, Crystal, in character as his show’s fading comedian star Buddy Young Jr., let loose on the Sunday night telecast with a series of nonsensical guttural sounds vaguely approximating Yiddish.

He then gleefully entered the audience for a bit of crowd work, messing with attendees Samuel L. Jackson and Lin-Manuel Miranda — who unwittingly became a Jewish “Hamilton” alter ego: “I’m Alexander Rabinowitz.” (Miranda has proven his Jewish-theater bona fides before: He sang “To Life” from “Fiddler on the Roof” at his own wedding, and also performed in Hebrew in a college a cappella group.)

After briefly cursing “an old Jew’s worst nightmare: stairs,” Crystal ended his routine by leading Radio City Music Hall in a giant “Oy vey” chant. It was surely a nice consolation prize, given that “Mr. Saturday Night,” based on Crystal’s 1992 movie of the same name, left the evening with none of the five awards it had been nominated for (the top prize for Best Musical instead went to Pulitzer Prize winner “A Strange Loop”).

Some other Jewish-adjacent nominees were more successful. “The Lehman Trilogy,” an expansive play about multiple generations of the Jewish banking family, took home Best Play and four other Tonys. “Company,” a gender-swapped revival of the classic Stephen Sondheim show that premiered shortly after the Broadway titan’s death, won five awards including Best Musical Revival. And “Take Me Out,” a restaging of Jewish playwright Richard Greenberg’s 2002 play about a professional baseball player who comes out as gay to his teammates, won for Best Revival of a Play, as well as for its lead actor Jesse Tyler Ferguson.

“Girl From the North Country,” a jukebox musical that reimagines Bob Dylan’s songbook for a Depression-era story about American hardship, also won a Tony for Best Orchestrations. During the broadcast, “North Country” star Jeannette Bayardelle delivered a showstopping live medley of Dylan’s “Like a Rolling Stone” and “Pressing On” (the latter from the raised-Jewish rocker’s Christian conversion phase in the 1970s and ’80s).

And there was one more Jewish appearance at the Tonys, as “Spring Awakening” star Lea Michele reunited with that 2006 show’s cast for an anniversary performance.