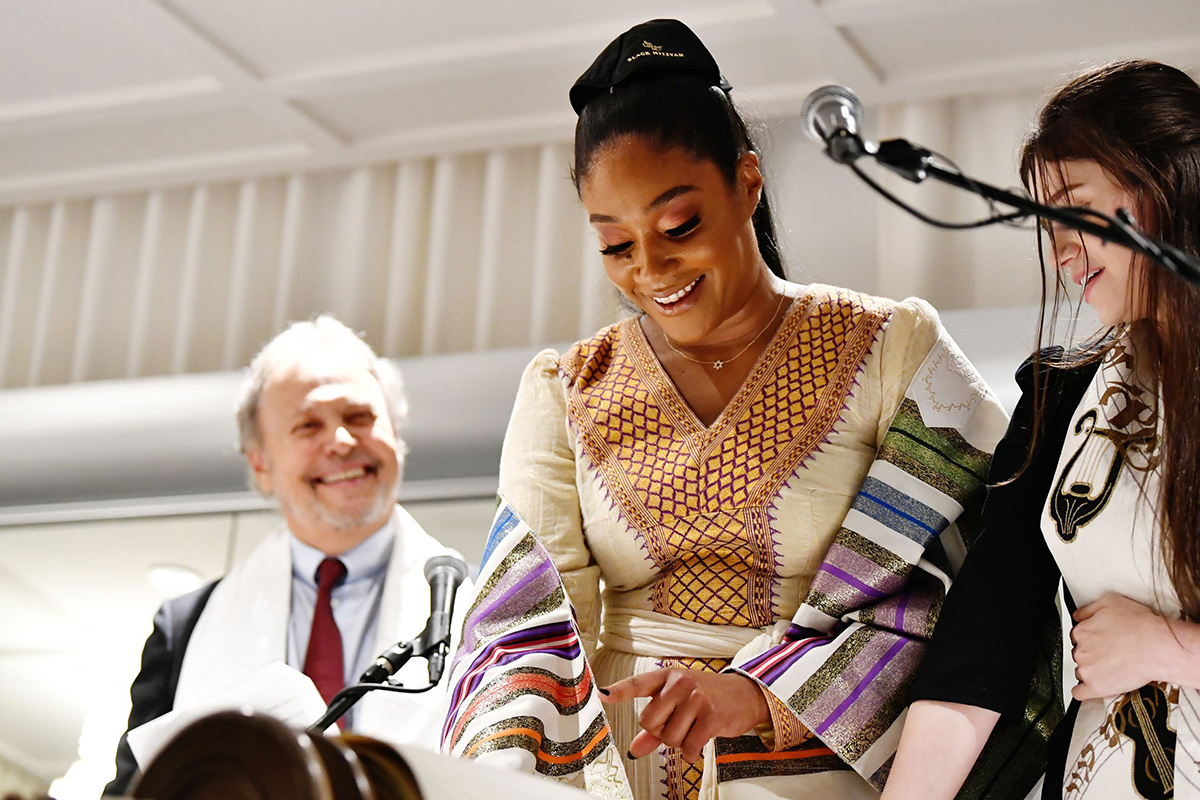 In a new, charming interview, Jewish BFFs Billy Crystal and Tiffany Haddish — who are about to star in a very Jewish movie, Here Today — spoke about their friendship, and Crystal’s involvement in Haddish’s bat mitzvah in 2019.

“I invited Billy to come, and then I was like, ‘Billy, would you be willing to do my aliyah?'” Haddish told CBS Sunday Morning, about asking Crystal to say the traditional blessing over the Torah during her bat mitzvah, which coincided with the release of her Netflix special, Black Mitzvah. “And he’s like, ‘Yes.’ I’m like, ‘Yesss!'”

Crystal told CBS’ Tracy Smith, “To be asked to do one of the key blessings for her as she was about to read from the Torah was really an honor. And the fact that she asked me to do it really meant a great deal to me.”

In pictures from the ceremony, you can see Crystal beaming at Haddish as she reads her Torah portion. (Her Hebrew teacher, Aliza Rose, who is the daughter of her bat mitzvah officiant, Rabbi Susan Silverman, stands to her left; Crystal is to her right).

While Crystal dons a very official suit and is wrapped by a simple, white tallit (prayer shawl), Haddish, with a satin “Black Mitzvah” kippah on her head, is wearing a beautiful, colorful tallit and a gorgeous Eritrean dress — a tribute to her father, an Eritrean Jew. She also wears a gift from another Jewish friend: a beautiful Jewish star necklace from the one and only Barbra Streisand.

“Well, Billy knows — and I’ll say it in front of the whole wide world — I love Billy,” Haddish says in the interview. “I love you, Billy. I consider you my uncle, my family, my mentor, my everything. I love you to death, and, you know, if I could have you around me all the time, I would.” Awww!

“Well, thank you,” Crystal replies — and then because of course, he can’t help it, he adds a Jewish dad joke to slightly distance himself from the emotional depth of the moment: “And so, as your uncle, can I borrow some money?”

“Yes! I know you’re not gonna pay me back, but that’s OK!” Haddish responds — because she’s a comedian and can’t help but “yes, and…”

We love these two so much and can’t wait to watch them win us over in Here Today, which is coming out this Friday, on May 7. What a thrill.