14 Jewish Facts About ‘The Crown’ That Reign Supreme 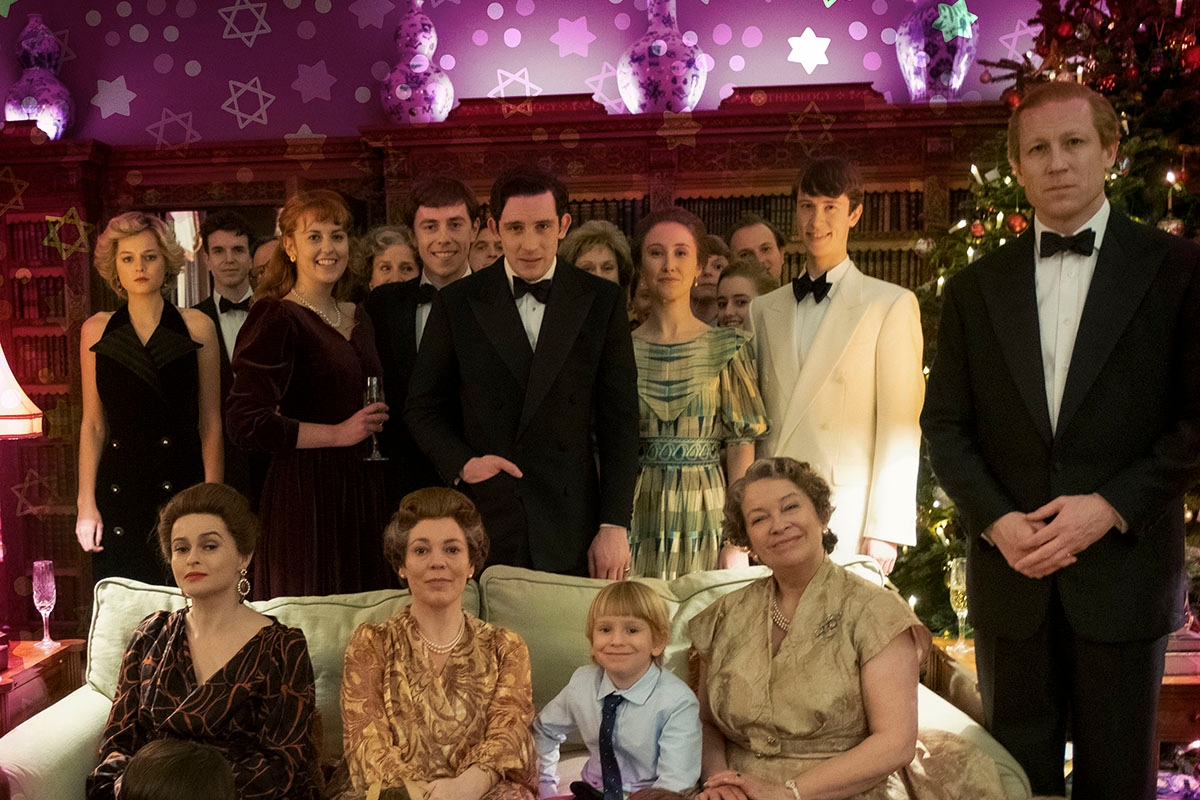 I resisted the siren call of Netflix’s The Crown for three whole seasons, smugly announcing to everyone that I just “couldn’t get into it.” What a fool I was! This fall, I went from a never-Crown-er to binge-watching it in record speed.

The show’s first two seasons may be a bit slow, but the latest two seasons are so great and compelling — and, of course, the latest season features everyone’s darling, Princess Diana. (Though, perhaps not surprisingly, the monarchy has taken umbrage with the show’s portrayal of this controversial chapter in their history.)

What you may not realize is that sprinkled throughout the series — and in the cast and, yes, in actual royal history — are a spate of Jewish stories. Yes, it’s hard to see how there could be much Jewish about the British royal family, but I assure you, there is! Here are 14 fun facts about The Crown and Jewish royal relations.

1. The Crown was created by Peter Morgan, a screenwriter and playwright, who created the 2006 movie The Queen, starring Helen Mirren as Queen Elizabeth II. Morgan’s father was Arthur Morgenthau, a Jewish businessman who fled Nazi Germany and settled in England in 1933, where he settled and married a Catholic Polish woman who “fled from Stalin.” Morgenthau died when Morgan was 9.

“It is devastating, losing a parent,” he told the London Standard. “I don’t really know what the effect is, but I suppose people might call me an ambitious man, and I’d say that an ambitious man is a damaged man. Some of the things I have written about are a way of connecting with my father.”

2. Love the opening of The Crown? Thank German Jewish composer Hans Zimmer. The award-winning composer actually spent much of his career not acknowledging his Jewish heritage — he says that growing up, his parents, who escaped Nazi persecution, were also scared to acknowledge it. But now he has embraced his Jewish identity, and will even be participating in a Hanukkah concert with the Israeli Philharmonic.

3. A central Jewish character connected to the royal family appears briefly on screen in episode 6 of season 1, at a men’s club meeting attended by Prince Phillip. He goes simply by Baron, but his name is actually Sterling Henry Nahum, and he was a court photographer and a good friend of Prince Phillip. He came from an Italian Jewish family and started his career taking pictures of ballet dancers. Baron photographed important royal events, like Philip’s wedding to Princess Elizabeth. He later opened his own photography studio, and went on to shoot famous Hollywood celebrities like Marilyn Monroe. He died in 1956.

4. A huge plot point in season 2 is the Suez Crisis, aka the Second Arab–Israeli War of 1956. British Prime Minister Eden is scolded by the Queen for colluding to have Israel invade the Sinai Peninsula in order to protect Britain’s oil interests and to remove Egyptian President Nasser, who had just nationalized the canal, from power. The U.K. and France later joined the active conflict, but pressure from the U.S., the U.N., and the U.S.S.R. led all three nations to withdraw from the war.

According to historians, the crisis “signified the end of Great Britain’s role as one of the world’s major powers.” Eden also resigned following the crisis.

5. In season two, the Duke and Duchess of Windsor, the former King Edward the 8th and his American wife, Wallis Simpson (for whom he abdicated the throne!) are revealed through the Marburg Files to be Nazi sympathizers.

These papers revealed a Nazi plot called Operation Willi (lol) to get the exiled former king to help the Nazis with a kidnapping plot that would force the U.K. to surrender to Nazi invasion. It’s possible that the Nazis also offered to reinstate him as king, in exchange for Nazi autonomy in Europe.

While none of the documents proved that the Duke directly colluded with the Nazis, they are pretty damning, and other information seems to indicate that he had sympathies for the Nazi ideology. The couple actually met Hitler in 1937, and the Führer apparently considered Edward to be “friendly towards Germany and thought that Anglo-German relations could have been improved through Edward if it were not for the abdication.”

6. We don’t really know what the Queen thinks about Jews, but we do know the feelings of one of her longtime American friends, who is shown in season 2. Billy Graham, who remained a friend of Queen Elizabeth for most of his life, was not a fan of Jewish people. In recorded conversations with Richard Nixon, he made truly vile antisemitic remarks to the former president (who also voiced very virulent antisemitism) — reinforcing narratives that they control Hollywood and the media, with Graham lamenting “what they are doing to our country.”

7. Prince Phillip followed a Jewish educator from Germany to Scotland. Phillip, who is presented in The Crown as having a very complicated relationship with his family, was sent to Schule Schloss Salem in Germany in 1933 — the school was owned by a relative, thus saving the not-so-well-to-do family precious school fees. However, the school had a Jewish founder, Kurt Hanh. As the Nazis rose to power, Hanh escaped Germany and moved to Scotland, where he founded Gordonstoun School. After two semesters at Salem, Philip transferred to the Scottish school.

8. Despite this, two of Prince Philip’s sisters married prominent Nazis. His sister Cecile’s funeral, filled with Nazi regalia, is shown in season 2 of The Crown. His other sister, Sophie, named her son Karl Adolf — a tribute to Hitler.

9. The episode that recounts the story of Prince Phillip’s estranged mother, Princess Alice — a devout Christian who started an order of nuns in Greece, where she spent most of her life — is perhaps one of the most emotionally resonant episodes of the show. However, Princess Alice’s Holocaust heroism isn’t mentioned in this tear-jerker of an episode: During the war, Alice sheltered a Greek Jewish family, the Cohens, saving them from the Nazis.

Alice was recognized by Yad Vashem as a Righteous Among Nations, and was buried in East Jerusalem.

10. Josh O’Connor, the very talented actor who plays Prince Charles, is part Jewish. Specifically, his maternal great-grandmother was Jewish, of Ashkenazi and Sephardic heritage. (This means that O’Connor is Jewish according to strict interpretation of Jewish law, since both his maternal grandmother and his mother are.)

O’Connor has never spoken about his Jewish heritage, as far as we know, but his mother, author Madeleine Bunting, wrote about it in her book Love of Country: A Journey Through the Hebrides. She is also the author of the book The Model Occupation, about what happened when the Nazis occupied the British islands, which, she claims, had a small part in the Channel Islands’ process to recognize their legacy in the Holocaust.

11. Helena Bonham Carter, who plays Princess Margaret in season 3 and 4, also has fascinating Jewish heritage. Her grandfather, Eduardo Propper de Callejon, is actually a Righteous Among Nations, formally recognized by Yad Vashem for helping save thousands of Jews as a Spanish diplomat during the war. While both Callejon’s father and his wife (Bonham Carter’s grandmother) were Jewish, he considered himself Catholic. Callejon worked in France during the war, and he issued thousands of visas that helped French Jews to escape to Portugal. A mensch and a a hero!

12. Speaking of Princess Margaret, Lord Snowdon had very strange and cruel ways to torture her later in their marriage. One of them included, allegedly, a very strange antisemitic curse. According to Margaret’s good friend, Lady Glenconner: “She told me, for instance, that she no longer opened her chest of drawers — she got her maid to do it instead — because Tony had developed a habit of leaving nasty little notes inside. One of them said: ‘You look like a Jewish manicurist and I hate you.”

Another strange but actually fun Jewish fact about this troubled couple is that they once hired a chef from a London kosher restaurant to be their personal cook. The chef himself wasn’t Jewish, but he was an expert in the practice of kosher cooking, and sad to leave his former place of employ, saying he was conflicted about leaving because “because Mr. and Mrs. Bloom have been so good to me and working here is almost like being one of the family.”

13. OK, here’s a fun general royal Jewish fact: In case you didn’t know, there is… a royal mohel. That’s right, according to Haaretz: “the Prince of Wales, Charles, was circumcised by Rabbi Jacob Snowman M.D, at the time the leading mohel in London and the circumciser to the royal family.” And this wasn’t a one-time thing — it’s a longstanding royal tradition: “The fact that the delicate act was performed upon the royal princes by a Jewish practitioner, a custom dating back to George I, who brought it over from his native Hanover, has long been a source of pride within the local community,” Anshell Pfeffer writes.

14. While there are no Jewish royals, there is a Jewish Windsor! That’s right, Jewish actress Sophie Lara Winkleman, whom you may know from Two and a Half Men, is the wife of Lord Frederick Windsor, the son of Queen Elizabeth’s first cousin Prince Michael of Kent. She is known as Lady Frederick Windsor.