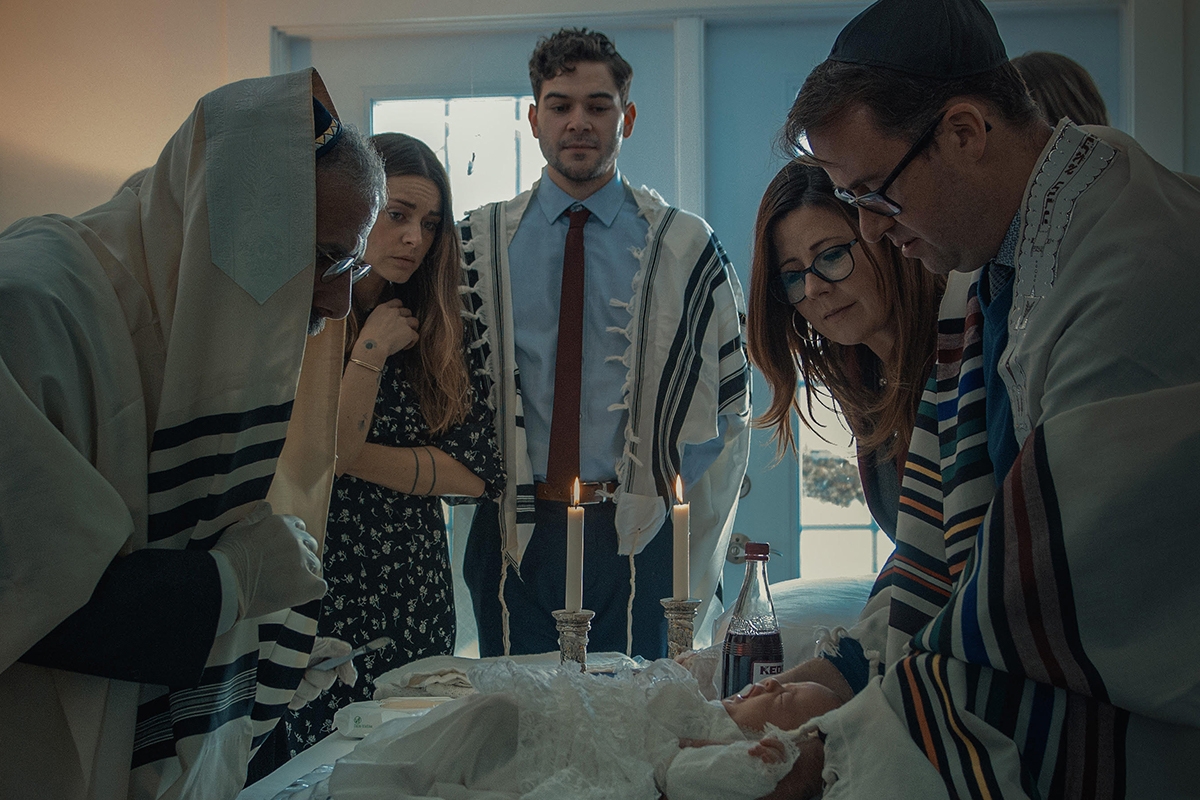 Parenthood comes at you fast. There’s no grace period, no moment of rest — when a child arrives, new joys and challenges appear instantly.

Charles Wahl’s short film The Mohel, which premiered at the 2021 SXSW Film Festival last month, tells the story of a couple confronting one of the first challenges that new Jewish parents of baby boys face: the brit milah.

Of course, there are a variety of issues that can surround this Jewish ceremony that’s typically held on the eighth day of a baby’s life, from whom to hire, to whom to invite, to whether or not to circumcise at all. In The Mohel, the new parents, James and Lola, face one problem in particular: They live in a place with few Jews and there are no mohels for miles around.

Through the couple’s story, which shows them balancing the need to please their families (James’ mother, in particular) with their own partnership, Wahl finds a way to subtly comment on many struggles of modern Jewish life. Among the big topics addressed in the 14-minute film include how to feel Jewish away from hubs of Jewish life; the gatekeeping of Jewish identity; and the sometimes-transactional nature of what should be highly spiritual events.

I talked to Wahl via email about the inspiration for the film, one of my favorite recurring moments, and putting authentic Jewishness on screen.

Where did this idea come from?

The idea to make The Mohel came from a conversation I was having with another Jewish filmmaker while we were waiting for a movie to start. I was telling him stories about what it’s like going through the brit milah process in a place with a smaller Jewish community. That conversation led to other stories — anecdotes I had heard, or things I had seen over the years revolving around the religion.

By the end of the discussion, he said, “You have to make a movie about this.” After sleeping on it for a while, a way to frame a story that I felt could be very effective came to me. A couple going through a brit milah seemed like a perfect milieu to tackle themes that I really wanted to explore: the often transactional nature of religion, and the challenges of maintaining religion and old-world traditions in the modern world.

Where exactly does the film take place?

It was filmed in Dartmouth, Nova Scotia, but the exact setting is never specified.

Do you live in a rural area, or in a place without many Jews? You seem to know that world, regardless. Any stories you want to share?

I grew up in Toronto, Ontario, which has a very vibrant Jewish community, and then moved to Halifax, Nova Scotia a few years ago; I work between the two places. Halifax is a proper city, but is much smaller than the larger city centers in Canada like Toronto, Montreal, and Vancouver. The Jewish community in Halifax is small but there is a presence here. Like in the film, though, there are no mohels here, or anywhere in Atlantic Canada for that matter… which shocked me when I found out. So if anyone needs to have a brit milah anywhere in Atlantic Canada, you have to fly in a mohel from Toronto or another major center. So on top of the stress of having a newborn and putting together a brit milah in the middle of that chaotic time, you now also have to coordinate finding a mohel in another city and organize bringing them into town.

What was the casting process like? Did you have concerns about finding Jewish actors in a community without a large Jewish population?

Kaelen Ohm, who plays Lola in the film, was the first person cast. We had worked with each other on my previous short film, Little Grey Bubbles, and I thought she would be perfect. As I started searching for the right person to play James she recommended Daniel Maslany. I knew who he was from the TV series Murdoch Mysteries, and thought he had the right vibe for it, so looked up more of his work, and the more I saw, the more I thought he could be a great James.

The part of Rabbi Fishel was definitely the most challenging one to cast. I wanted to make sure it was an actor that could be authentic, and also have a strong enough presence to swing the entire film. I was very lucky that a friend happened to mention Sam Rosenthal to me. At the time, he was the creative director at a theatre in town, and was appearing in a show that same night. My wife and I went to see the show, and I thought he was really good in it, but he was nothing like the rabbi I pictured in my head — he was clean shaven, wearing a nice suit, and seemed very debonair.

Still, we met for coffee a few days later. Within five minutes of talking to him, I knew I had found the mohel. As a fellow Jew who grew up in the same community as I did, he clearly completely understood who this character was and the tone I was going for. He seemed passionate about it, and I could tell that we would commit to making it authentic.

Any stories from set?

The shoot itself was pretty smooth, actually! Our biggest worry was authenticity, especially with all the religious aspects of the film. In pre-production, Sam and I met with a local rabbi and went over the script with him. He very graciously helped us with all the information we needed including the proper prayers, the specific steps of the brit milah ceremony, and he also was a great sounding board for us with any other questions that popped up. The production designer and I also consulted with him to make sure all the props were authentic.

The thing I was most nervous about going into the shoot was working with such a young baby. Again, we wanted the film to feel real, so we cast a very young baby in the film that was a bit small for his age so that, on camera, it could feel believable as a baby a couple would have just brought home. Having worked with babies before, I was terrified that he would disrupt the whole shoot with crying or fussing a lot within takes. We put a lot of contingencies in place if the baby ended up being fussy, like realistic dolls that we could use as a stand in, or during wide shots, but thankfully, we didn’t need any of it! The baby was very calm, peaceful, and didn’t fuss at all.

I love the ongoing struggle your protagonist has to keep on his kippah. Both funny and relatable, and also thematically resonant. Was that written in the script?

Haha yes, that was in the screenplay. That’s something that happens to me all the time and I thought it could be a good way to tie up how he still feels about religion at the end of the film, without him having to say any words. Even after everything James goes through over the course of the movie, he still honors the religion and traditions that are instilled into him.

What do you hope audiences will take away from this film?

My hope is that watching The Mohel will promote examination and discussion of what living with religion in the modern world means. Regardless of a person’s religion, we all grow up with traditions and expectations placed on us, and are then asked to live with them in a different time, and quite often in different environments. I think that as times change we need to be more accepting of others, and respect how others choose to follow their faith.

The Mohel premiered virtually at SXSW in 2021. You can get updates on the film on Wahl’s website.