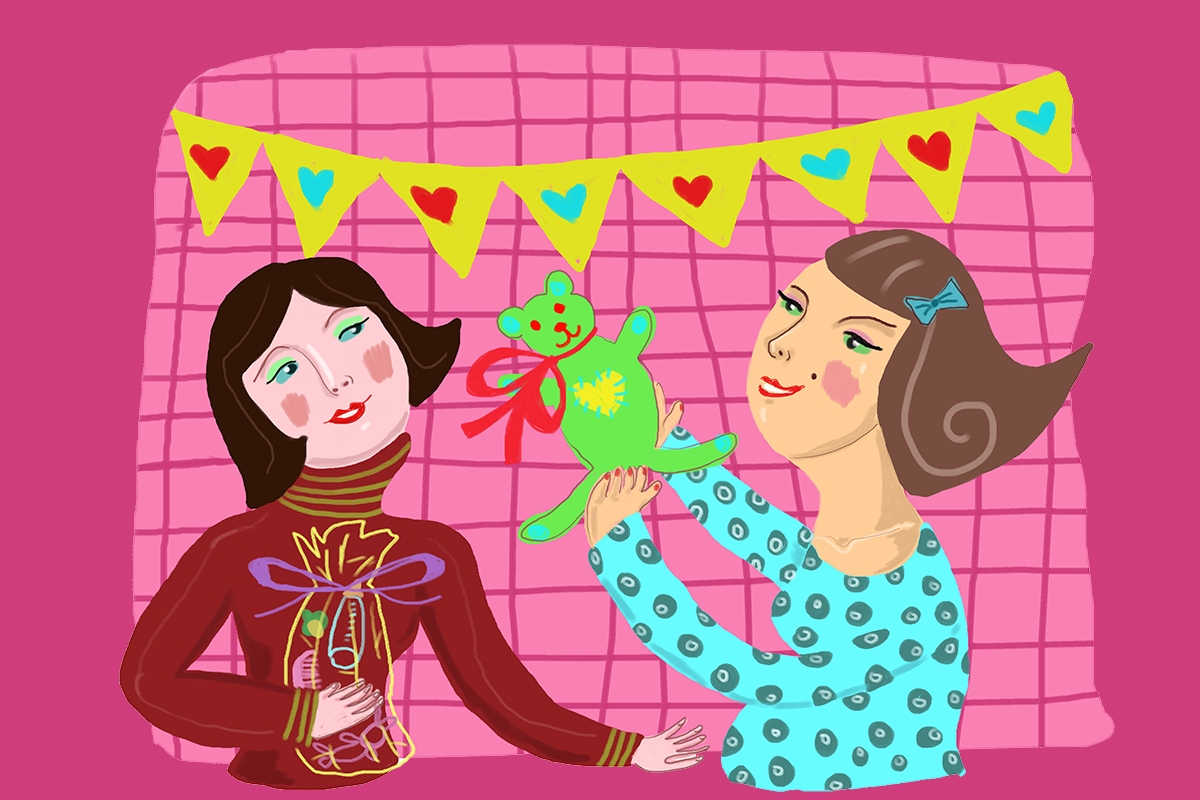 I was truly shocked when I saw my positive pregnancy test. It took some time to wrap my head around the fact that I was actually, really, truly, pregnant.

I am going to be a mom, I thought. I get to have a baby with my incredible husband who I am completely obsessed with. How did I get this lucky?

You see, this is my second marriage. Growing up, my plan had always been to get married at 25 and have a baby by 30. I knew I wanted at least two kids and I couldn’t wait to meet them.

And I did get married at 25. The problem was I married the wrong husband. So, when 30 rolled around and it became glaringly obvious I didn’t want to have children with him, I filed for divorce. Obviously, there is a lot more to that story, but I’ll save it for another day. For the purpose of this essay, let’s just say I got divorced on behalf of my future children.

Over the course of the next year-and-a-half of being single — which felt a lot longer than 18 months —  I spent a lot of time dreaming of my future husband. I thought about what he was doing, where he lived, what he would be like, and what our children would be like. I had met my ex at 18 so I had never really dated; I was both excited and terrified to join the online dating scene in New York. I knew nothing — I literally Googled “what to expect on a first (second, third) date.” But when Jeremy and I both swiped right on Bumble, I knew this was going to be something important.

My hunch was right: After our first date, I knew Jeremy was the guy — the one I’d been dreaming of. He’s kind, generous, caring, gentle, strong, funny, and sincere. He feels like home.

We got married two years later; I was 34 and he 33. According to my original plan, I was four years behind on the whole have-a-baby-by-30 thing, but I had made my peace with that. So after being married for just three sweet months, I was floored to find out I was pregnant.

While I definitely have a flair for the dramatics (I worked professionally in musical theater for over 10 years), my deepest fear was that I wouldn’t be able to have children. I had already had my entire life pulled out from under me once. I know how much it hurts to lose everything and I didn’t know if I was strong enough to go through that again. But, suddenly, I learned I was going to have a baby with the man of my dreams. I didn’t know I could actually have everything I wanted!

When we told my mother-in-law, who is not Jewish, about the pregnancy, she offered to host a baby shower for me. After everything I went through to get to this stage of life, I was thrilled — I wasn’t going to miss any opportunity to celebrate this baby! I agreed to the shower, and I called my mom to share the details and ask her for some guidance on whom to invite.

Now, Jeremy is what he considers “halvsies.” His mom isn’t Jewish. She grew up in Germany and while not religious, Christmas is a big and beautiful tradition in their family. His dad is Jewish and Jeremy knows the Hanukkah blessings and has been to a lot of Passover seders. I, however, grew up in a very Jewish household. I’m talking my mom was president of the synagogue, and I read the torah portion monthly at Shabbat services, each year on Yom Kippur, and I read from the Megillah on Purim. (Yes, I was kind of a big deal.) I even had two bat mitzvahs, one in New Jersey and one in Israel.

Now, my mom was thrilled about the baby news. But she also told me that, while she wants me to have everything I want, she doesn’t approve of baby showers. “Jews don’t do that,” she said.

My mom was raised Orthodox and mostly by her Russian, Yiddish-speaking grandmother. And while there’s no Jewish law that prohibits having a baby shower there are BIG superstitions against them, mostly stemming from the fear that celebrating something so good could invite a person with ayin hara, or the evil eye.

And so, my mom told me she would not be coming to my baby shower, and she was not going to invite her friends.

I was crushed. But I wasn’t about to let my mom — or anyone, really — spoil this special day. This was the first (of what turned out to be many) instances where I made decisions for myself and my family that were perceived by my mother as a direct criticism. But accepting my mother-in-law’s shower offer was one of the first concrete examples of how my Judaism has evolved in my adulthood, and how it differs from my family of origin. Once you’re married — and especially once you’re a mother —  your family of origin extends to include your partner’s family, too.

And now, this adult version of me and my Judaism was being rejected by my mom. Now, I knew, deep down, that my mother’s refusal to participate in my baby shower wasn’t because she didn’t love me or her grandchild — it was 100% because she was raised by someone who was steeped in Jewish tradition and was adamant that baby showers were bad luck. Still, it hurt deeply.

“Jews don’t do that,” was my mom’s refrain. But actually, according to her, Jews don’t do a lot of things, such as have guest books at weddings, send holiday cards, or put mayonnaise on sandwiches. In fact, the list is so long that I’ve become suspicious that my mom says “Jews don’t do that” about things she personally doesn’t like.

I was sad that these traditions were keeping my mom from celebrating me and my baby. That she couldn’t see past what we “should” do and honor how important this celebration was for me. I cried a lot after I hung up the phone. And the following day. And for the following week. In my mind, the shower was not only a celebration of this baby, created out of the love my husband and I share. It was also a celebration of not settling, of how I fought for and created the kind of life I wanted and deserved.

But then, after not speaking for two weeks — which was very weird for us — my mom called me. Now, I don’t know what happened behind the scenes. Did my dad talk to her? Did my best friend’s mom get involved? My brother? My husband?

I don’t know, but suddenly she had a list of close friends she would like to invite to the shower. She apologized for her reaction, explaining that all she could hear was her grandmother in her head, her voice telling her that Jews don’t have baby showers. But she knows times are different, and that I’m different, too. And my mother, to her credit, recognized this, and decided that she wanted to celebrate all of that with me.