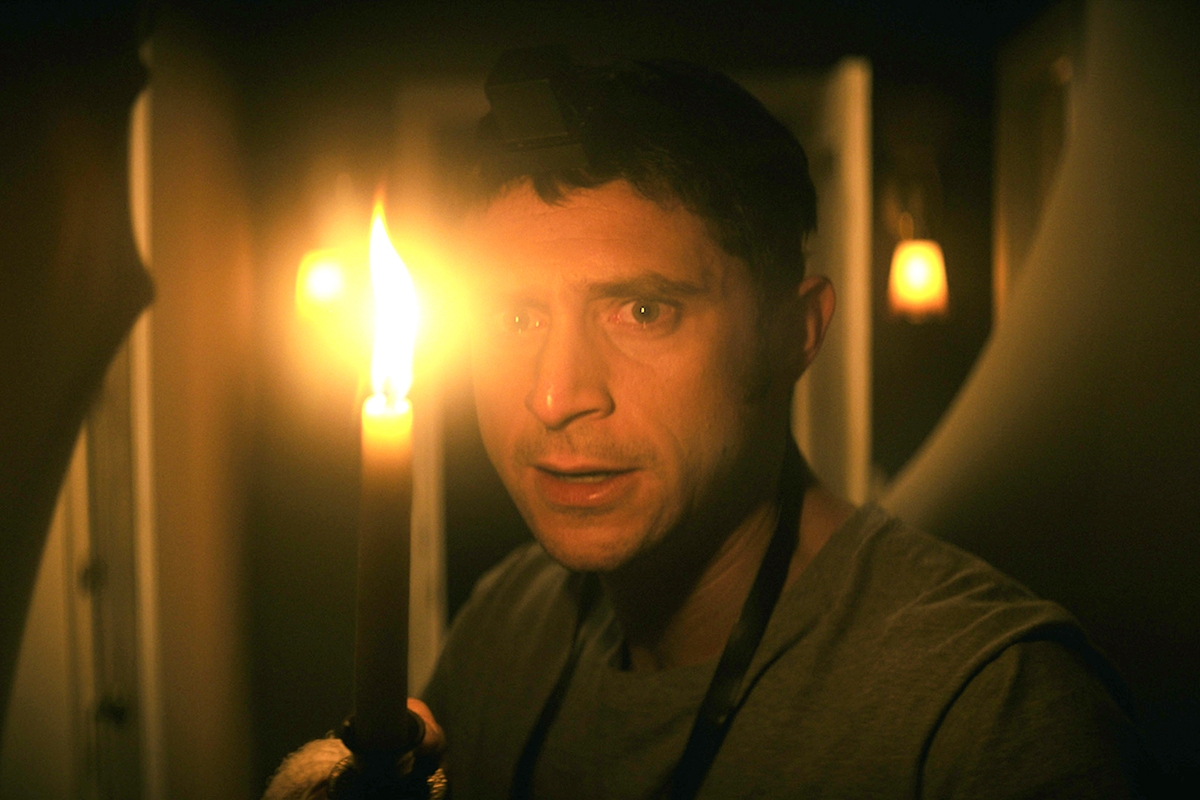 Back in July 2020, we wrote about the spooky trailer for a forthcoming Yiddish horror movie — and yes, you read that right.

Quite frankly, as a horror-avoidant film fan, I didn’t think I’d want to watch The Vigil, which premieres on Friday, Feb. 26. But after reading more about the film, which is being promoted as the “first Jewish horror movie,” I realized it was full of depth. The film takes a deep dive into issues surrounding Jewish identity and intergenerational trauma and, from the very first scene, I was hooked.

The Vigil, written and directed by Keith Thomas, sheds light on the darkness that all of us harbor. The deceptively simple plot centers on Yakov (David Davis), a young, formerly Hasidic man who returns to his Jewish community in Brooklyn to be a shomer, or night watcher, over the body of a deceased Holocaust survivor. (This Jewish tradition is called shemira, or sitting with the body, and is customary during the period of aninut, the time between death and burial.)

The Vigil is, without a doubt, a horror movie, but it is one that’s deeply rooted in Jewish culture, from the depiction of Jewish customs, to the Yiddish dialogue, to little details in this Brooklyn house of horrors, from the types of candies in the candy dish to the Jewish art on the walls.

The entire film takes place over the course of a single harrowing night. As Yakov sits with the body, he endures the agony of being haunted by a mazzik, a Jewish monster, as well as the pain of his own memories. We see flashbacks of one particular night that has haunted Yakov — no spoilers here! — and witness the monster begin to seep into other parts of his life. This is tempered by some truly chilling scenes involving Mrs. Litvak (the fabulous Lynn Cohen), the widow of the body Yakov is watching over.

The cast is fully Jewish and features some prominent actors, including Cohen, who previously played Magda on Sex and the City as well as Golda Meir in Munich. (It was one of her of her final roles before she died last February.) The film also features Hasidic actor Menashe Lustig — who played a version of himself in the 2017 Yiddish film Menashe — and who also served as the cast’s Yiddish coach.

Kveller spoke with Thomas — who attended rabbinical school and wrote his thesis about monsters in the Torah — to learn more about this one-of-a-kind film. We chatted about filming in Brooklyn, the deeply Jewish cast, and his aim to create, as he puts it, “a horror film that felt Jewish, the way that I understand feeling Jewish.”

Why did you decide to make a Jewish horror movie? And a movie in Yiddish, in particular?

There’s this old writer’s adage to “write what you know.” And so I thought, what can I make that feels unique and different? What do I actually, personally know that I haven’t necessarily seen?

Also, the core concept of a shomer — I was like, how has nobody made a horror film about this? Someone sitting with a dead body? I mean, come on!

Was it important to you to have a very Jewish cast, and what impact do you think that had on the final product?

It was important for a couple reasons. It’s a small cast because most of the film takes place with just our lead. It was important that he’s Jewish, and that he’s surrounded by people who are authentically part of this world. So, at the beginning of the film, there’s a meeting around a table of folks who are in what feels like a Footsteps meeting for people who are ex-Hasidic. And everyone at that table, other than Dave Davis, is formerly Hasidic — they’re all from that community.

Dave’s casting was just one of those amazing serendipitous moments. I had been interviewing other actors and most of them spoke Yiddish. I took a break, because I wasn’t finding exactly what I wanted. Then I just happened to watch a movie that Dave was in. I told my producers, “I need a guy like this.” And they’re like, “Why don’t you just reach out to him?” And so I did. And it ended up that his family’s from New York, too. And he has a lot of the same background I do. It just worked out amazingly.

What parts of Davis’ background do you think helped him with the role?

For Dave, this process was a lot about rediscovering his own roots. He had family, Holocaust survivors, and folks from earlier who had come to New York to escape antisemitism. That was very personal, kind of getting back to his roots. At the same time, you know, when he started the film, he didn’t speak any Yiddish. And so he just took this bootcamp, just immersing himself. He loved it. He’s still very good friends with a lot of the folks that he met on that set in terms of people helped him translate stuff as well as give him the dialect, the mannerisms

What was Menashe Lustig’s behind-the-scenes role like? Did he help maintain authenticity of the Yiddish dialogue?

Definitely. When I first got to New York for pre-production, I sat down with Menashe and we translated from English to Yiddish, his lines in particular. And that was a great process; a lot of things that I had written, he was like, “We don’t have this word in Yiddish.” He’d say, ‘Well, in the community, we’d say this,” and that was coming from a place of real authority. He knew exactly what we were trying to get at and what they would say.

This movie was one of Lynn Cohen’s final works before she passed away. What was it like working with her?

She had such a rich history — over 100 performances. It was just so organic, the way she could just turn it on and just do her thing. She was channeling her own grandmother, in terms of her performance. Not necessarily the dementia but the accent she’s using, and the little song she sings. It felt personal to her — which, you know, I loved .

Intergenerational trauma — from both the Holocaust and Jewish ancestors — is a huge theme of the film. Is the demon a sort of embodiment of the trauma?

If you look in Rabbinic literature, you’ll find references to mazziks, and they’re just demons. The references literally say, “Just don’t go into that house, because there could be a demon or a mazzik in there.” But it never described what the mazzik looked like, so I kind of had to make it up.

I thought, “How do we make something that feels new and different but, at the same time, is a direct embodiment of the themes of the movie?” One of the big themes is never being able to move forward because you’re always looking back. So I thought, let’s make that literal — let’s have the mazzik’s head twisted backwards, so it’s constantly looking at the past.

The Vigil is now streaming on IFC Center at Home, with other streaming services to follow.