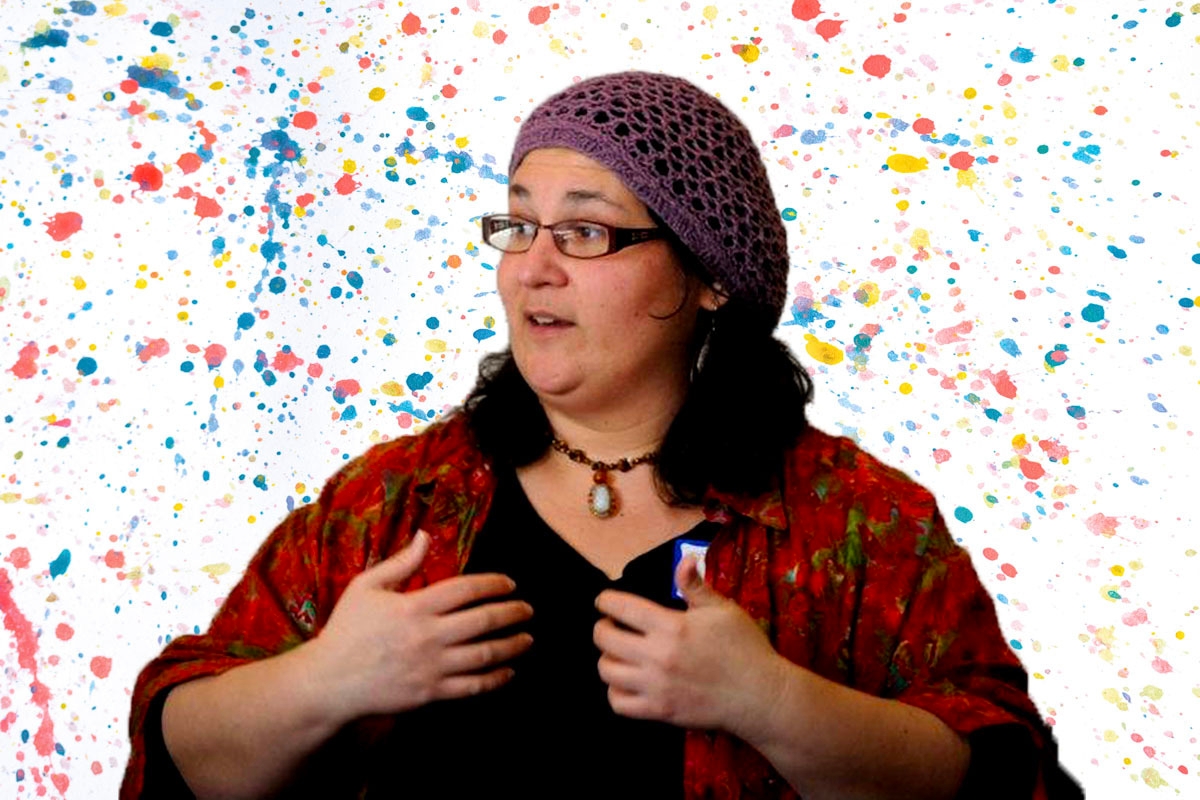 There’s an old joke that summarizes Jewish holidays: “Someone tried to kill us, we survived, let’s eat!” But despite the ways in which Jewish food culture is rich, delicious and full of meaning and tradition, Jewish spaces aren’t exempt from mainstream — and often harmful — attitudes about diets, size and how the way someone’s body looks determines their worth in a community.

That’s where Rabbi Minna Bromberg comes in. A fat activist for more than 30 years and a rabbi for 10, Bromberg just celebrated the one-year anniversary of Fat Torah, an organization she founded to educate, inspire and connect people around the world in the work of ending weight stigma through a lens of Jewish spiritual tradition.

“There’s no doubt that motherhood is part of what’s moved me to be as public about my activism as I am today,” Bromberg, a mom of two kids (ages 5.5 and 24 months) tells me. “I started Fat Torah because no one should have the experience I had of going to a Hanukkah party with 70 preschoolers and having the song leader say to all these little kids, ‘Let’s get back to dancing unless you’ve gotten too fat from those sufganiyot.’ Our kids don’t deserve to have their enjoyment of Judaism ruined by fatphobia.”

As a rabbi, Bromberg brings the teaching that all human beings are created in the Divine image into her work, and she has made it her mission to build a world in which all bodies are seen as equally deserving of human dignity and respect. We talked with Bromberg about fat liberation, its connection to other body-grounded justice movements and how Jewish tradition guides her work.

What does it mean to be a fat activist?

Initially I would have said that it’s being out as a fat person who’s not interested in losing weight — that, in and of itself, is an activist thing. But what’s become clear to me, especially because of the ways that fat liberation has needed to distinguish itself from body positivity in recent years, is that fat activism is about believing that people of all sizes are worthy of equal treatment, under the law and in our culture, regardless of what your relationship with your own body is.

I think there’s sort of this sense that people have that they’re no longer welcome in the movement if they’ve expressed a desire to change their bodies or lose weight. There are absolutely parts of the fat acceptance movement where you would be unwelcome in the movement if you expressed a desire to change your body. And I think that part of what puts Fat Torah’s work really at that nexus of spiritual care and social justice, is saying that you really can’t express a desire to change your own body without perhaps being asked to examine what some of the social forces are that are causing that desire. Fat Torah is empathetic to people wrestling with their own desires to change their bodies, and supportive of everyone’s body autonomy, and we want to examine some of the social forces.

What does it mean to be a Jewish fat activist?

A number of the early feminist fat activists were Jewish — for example, the women who wrote the Fat Liberation Manifesto in 1973 were both Jewish. So it’s interesting to think about what that means in terms of being culturally Jewish and a fat activist. What it means, to me, to be a Jewish fat activist is that my work focuses on confronting weight stigma in Jewish communal contexts. Also, my activist lens is a Jewish social justice lens: deeply rooted in the Torah’s ideas about the inherent worth of every human being. When I’m calling for fat liberation, I’m using a moral voice that is very much Jewish.

There’s a lot of overlap in the fat liberation and disability justice communities — where I do a lot of my own activism — and a lot of solidarity. But there are places where there’s also a stark difference in experience. Something has changed with public perspectives of disabled people, to some extent. There’s been a shift away from seeing disability as a moral failing — either of the person or their parents — whereas fatness is still viewed as being both an individual and a public health failure.

I literally had a doctor say to me that she could tell from some blood work of mine that I had good genetics with bad behavior. And I was like, you don’t know what my behavior is! Right? Like she was 100% using my size as an indication of my behavior. And that behavior was bad.

Yeah. And this is like, that’s a pretty mild thing, actually, for a doctor to say to a fat patient. I mean, like, it’s one thing to talk about implicit bias, but explicit bias against fat people is still taught in medical schools. And that medical discrimination is a place where I think the experiences of being fat and the experience of being disabled intersect and or diverge are, I think, really fascinating. I was talking with Rabbi Lauren Tuchman, and she was talking about the experience of being pitied. She asked if I felt like I was ever treated with pity, and I was like, nope! But pity is not a way that she or anyone else I know wants to be treated. And there’s infantilizing that goes along with that — pity is a way of not seeing someone’s strengths, not being able to see them as a full human. And at the same time, I was just like, no, people don’t treat fat people with pity, because that would involve some kind of compassion.

“How exactly did your fatness make you disabled?”

How do you see the pushback on that in fat activism spaces? For example, to me, one of the biggest limitations of the popular Health at Every Size movement is that you can be healthy at any size, but you should be trying to be healthy. But we know some bodies are just not ever going to achieve any societal baseline of health, and that doesn’t invalidate their worth.

I honestly don’t believe there’s any kind of universal moral obligation to strive for health, let alone to achieve it. I wrote a piece for the Hebrew college blog about Parshat Va’etchanan, which is sort of the greatest hits of the commandments. It has this half of a verse — literally three words — that gets used as the proof text in rabbinic texts for the idea of shmirat hanefesh, that we’re obligated to avoid unnecessary risk. And people have written to me after seeing things that I’ve posted, saying, “What about shmirat hanefesh?” — which is essentially halachically-framed concern trolling. Because what they’re thinking is that it means we’re obligated to pursue a certain definition of health.

Which is why you see some conceptions of shmirat hanefesh today talking about it as self-care.

Right. But the piece that’s the kicker to me, though, is that the verse is actually about idolatry! It’s literally about not creating an image of a man or a woman and worshipping it.

Yes! So as a body liberation text it’s actually amazing, if we read it in context: You endanger your life by creating a specific image of a body and worshipping that image.

Which we know is true, and not just because of medical bias. Eating disorders are among the deadliest mental health conditions.

There’s the flip side of that, too, in Jewish spaces that still put up barriers to enforce those systems, from having a bima only accessible by stairs to having seats that are only designed for people of a certain size.

I once got a donation from someone who told me that they hadn’t been able to participate in their spiritual community for the last three years because the way that bodies are talked about was too triggering to their eating disorder recovery. And it’s obviously not just in the Jewish world, but it absolutely is part of our culture. There’s the formal speech, the ways fatphobia certainly is used metaphorically and literally from the bima. But it’s also in the schmoozing level of speech, where people talk about their own bodies. And that’s challenging because, like, why shouldn’t people be allowed to say whatever they want about their own bodies? But what are you saying about someone else’s body when you talk about your own?

So much of Jewish community revolves around food. My mom loves to cook and bake, especially around the holidays. But there were also diet books everywhere. So I got this mixed message growing up: food is good and fun, until it’s not. And bodies are special and worthy, until they’re not.

It’s absolutely a mixed message. And I think some of it comes from the experience of and desire for assimilation. My mom and I wrote an article about our family, sort of looking at four generations, and we really saw that Ashkenazi, early 20th-century immigration experience, and how assimilating into white America also meant assimilating into diet culture, and also meant taking on white supremacist ideas about bodies. And about fatness.

So there’s a sense of loss there, as well. And the way all these pieces come together, in the origins of people’s beliefs about their own bodies and how those beliefs are expressed — it’s something that, again, we need to come at from a place of compassion, right? Because often, it’s coming from a place of suffering, not malice.

How does that play out in the Fat Torah community?

So far we’ve been very lucky in that the default really does seem to be compassion. Something I’m very wary of is that on the one hand, I want us to be a community for people of all sizes, but I also want us to be a fat-centric space that centers fat voices. And this is also an important sort of Torah piece of it, the sense that human bodies exist on an unbroken continuum of sizes, and wanting to be a space where we can experience that sense of body diversity. But I’m also looking out for people with considerable thin privilege who are using it as a space to talk about their own negative feelings about their own body. For example, when a person who’s relatively thinner gains some weight and feels badly about their body, feeling compassion for what they’re feeling and how challenging it can be to have a change in your body, while remembering that some of that suffering is because it’s challenging to lose privilege.

That’s a really good way of putting it.

One thing that I’m especially excited about is , people are starting to really share actions that they’re taking in their actual lives, changemaking action, that’s amazing to have people sharing that.