Alex Borstein Is Having the Most Jewish Quarantine Ever 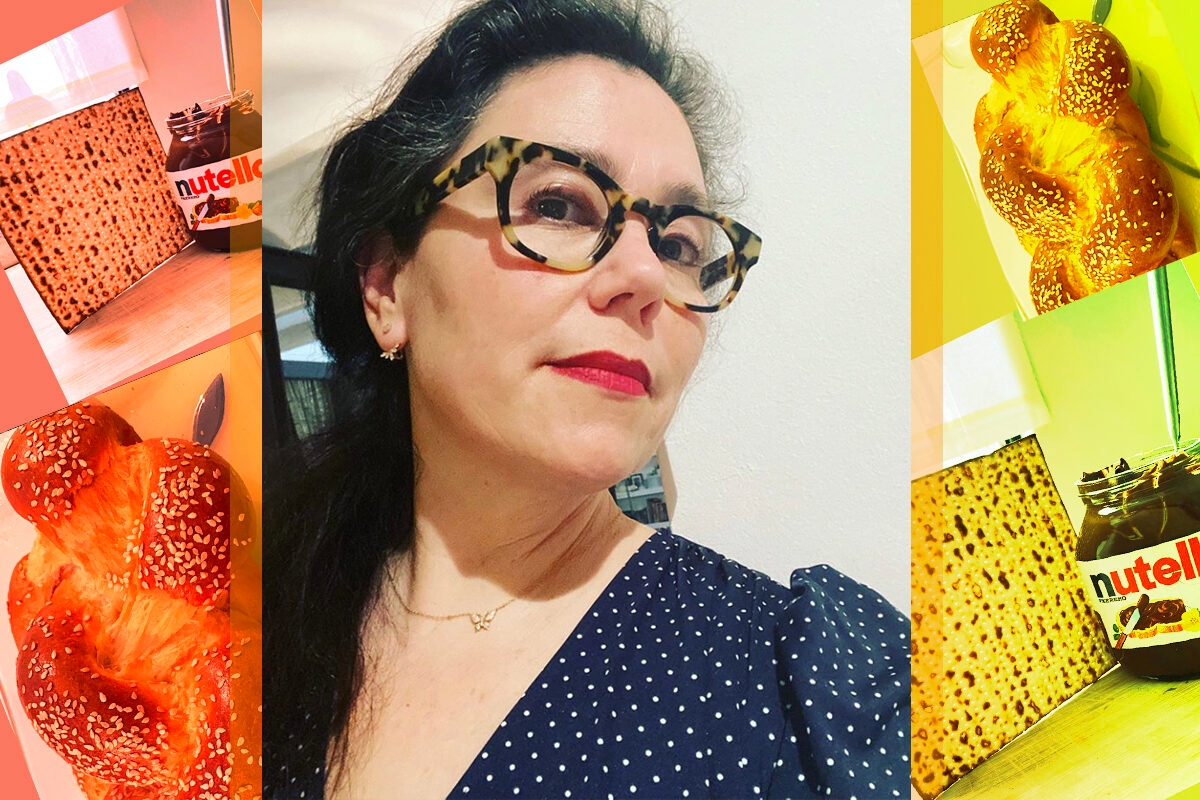 For the past six weeks, as coronavirus cases rose dangerously in Spain, the country’s population has been under lockdown — among them, mom of two and superstar comedian Alex Borstein, who lives in Barcelona with her family. Like so many of us in these unsettling times, Borstein has been drawn to the warm embrace of nostalgia — and for a lot of us, Borstein included, that means revisiting the Jewish foods and rituals of our youth.

In fact, The Marvelous Mrs. Maisel star seems to be having the most Jewish quarantine ever! So far she’s made challah, sang about matzah balls and matzah brei, watched Shtisel, and, yes, kept busy by having kvetchy Facetime calls with her Jewish parents.

It all started six weeks ago, when Borstein posted this video of a man using a kippah to make a mask, with the caption: “This guy has been waiting since 1st century AD to pull this gag off.” An instant classic!

This guy has been waiting since 1st century AD to pull this gag off.

She then posted this photo of herself washing and re-using plastic wrap. While there is nothing explicitly Jewish about this, it is 100 percent true that many of us are morphing into our Jewish parents and grandparents at a greater speed than previously expected — some of us by hoarding plastic bags and/or rewashing heretofore “disposable” plastics. Is it weird? Yes. Do Jewish parents do this? Also yes! (Also: Is it environmentally sound? Certainly better than tossing that stuff after a single use!) Borstein added the hashtag “#anyu,” which is the Hungarian word for mom. (Borstein’s mom is a Hungarian Holocaust survivor, she dedicated her Emmy win last year to her.)

Another way we are morphing into our Jewish parents during quarantine? Worrying about them excessively and, yes, making sure that they’re eating. Borstein, for her part, . posted about chiding her dad for constantly touching his face and, as she’s living abroad, she even sent her her friend and former MadTV costar Will Sasso to deliver groceries to her folks. (A total mensch, Sasso couldn’t help but comment at the amount of dairy the pair consume.)

That time when you were thousands of miles away from your parents and your dear friend @willsasso brought them the food they needed while in quarantine. . . This is what a heart looks like. ❤️ . . Thank you, Will and @moll.dolll forever in your debt. . . #jeezthesemuthafukaseatalotofcheese

Then came Passover. Borstein and her offspring made sure to create their own seder plate out of felt, feathers, egg, and apple. She also made epic-looking matzah balls.

No novel plague is gonna keep us from tellin’ tales about some old-ass plagues. You cannot break us, covid. . . Being on full lockdown we couldn’t quite get everything we needed for our seder plate. I had an egg and apples, but the kids made the rest from felt and feathers. Dayenu. . . #TheVidCantBreakTheYid #passover2020 #theEleventhPlague #quaratinepassover

Despite the social distancing, Borstein got dressed up for Eliyahu. She looked festive AF.

She also celebrated the divine combination of Nutella and matzah:

This Passover I wiped @nutella on the doorway. . . I also spread it over various parts of my body, but that has nothing to do with Passover. . . #GetPassedOver #passover2020 🍫 #dayenu

But, as Passover drew to a close, all that matzah caught up with her (as it inevitably does for all of us).  Bostein filmed an incredible rendition of Miley Cyrus’s “Wrecking Ball,” all about her consumption of matzah brei, matzah balls, and its uncomfortable consequences. She lamented: “All I wanted was your matzah balls/All you ever did was constipate me.” We hear you, Alex. We hear you!

I have officially lost my mind. Love you all. #passover #matzahball

On a more somber note, on Yom Hashoah, Israel’s Holocaust Memorial Day, Borstein, a descendant of survivors, posted a link to the Eva Stories project, an Instagram account that tells the story of Eva Heymann, a young woman who was murdered during the Holocaust. Borstein posted it with the caption: “People can be extinguished. But their memories still burn.”

A few days later, she shared her quarantine binge-watch of choice — which is very good, and very Jewish. Posting an image of Shtisel, she wrote: “So what are the rules? Can I just give my Emmy to the cast of #shtisel ?”

And, the Shabbat before Spain’s strict lockdown restrictions were slightly eased —  as of Sunday, April 26, kids are allowed outside for one hour a day —  Borstein did the ultimate Jewish mom move: She baked challah. Or more precisely, a “challah Golem.” Challah that is shaped like a mystical Kabbalist creature? Doesn’t get any more Jewish than that.

Challah Golem is coming for the GOP! November 2020 . . #challahgolem #shabbatshalomshowdown 🕯 🕯 🍷

The truth is that the glimpses of Borstein’s quarantine have been delightful — and not just because it’s so Jewish, or because she made some really good phalli out of produce (though she did spend a lot of time doing that). It’s because we’ve seen a lot of Borstein’s real life with her children, and they’re clearly having a good time.

For example, Borstein’s 11-year-old son, Barnaby, been practicing his incredible breakdancing, walking around the house in a Spidey mask, and yes, playing video games. Henrietta, 7,  is practicing her violin, jumping rope while wearing a giant unicorn mask, and reading Sponge Bob comics.

After Spain’s social distancing restrictions loosened, Borstein posted a video of her daughter riding a bike down the Barcelona streets for the first time in six weeks. She wrote: “When we went into lockdown 6 weeks ago this bike was too big for her. We have been changed in many ways.”

First day allowed outside!! . . When we went into lockdown 6 weeks ago this bike was too big for her. . . We have been changed in many ways. . . #quarantine #lockdown #onehour #bcn❤️

While Borstein doesn’t show her children’s faces on Instagram, we do get a lot of sense of what she is like as a mother — someone who is warm, caring, and fun; someone who truly delights in her kids; and someone who’s excited to pass on the beautiful and beloved Jewish traditions she grew up with to the next generation.