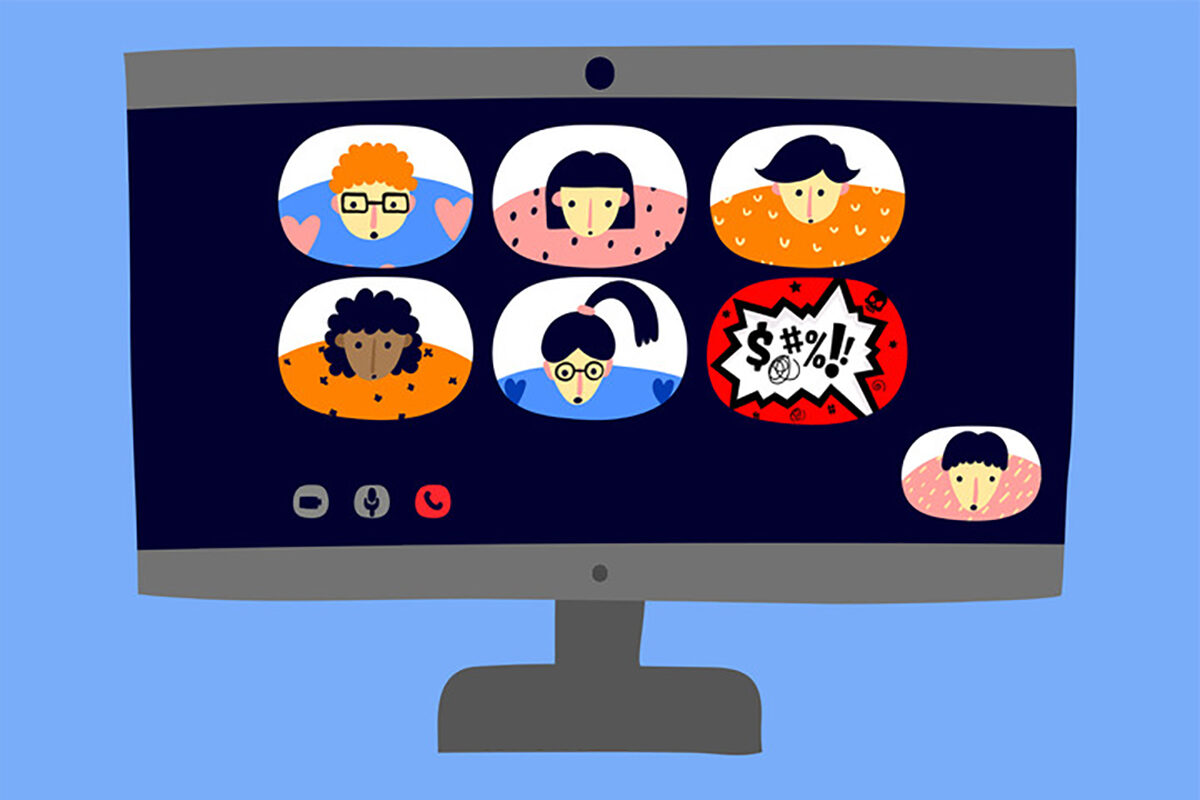 Prior to the pandemic, my family of five rarely attended Shabbat services at our reform synagogue in Connecticut. There was always something else to do — sports practices and school dances, birthday parties and weekends away.

Now, however, with our calendars cleared thanks to coronavirus, we tried services on Zoom one Friday night when we were stuck at home. I found it a pleasant, meaningful way to mark the end of another confusing chaotic week in my new role as the kindergarten teacher known as Mrs. Mom. Plus, I reasoned, with no commute, showers, or dressing up required, how hard could it be to gather my crew in front of the computer?

It turns out my family of five still couldn’t arrive on time for services. When our rabbi virtually welcomed us on Zoom, only my 5-year old sat with me at our kitchen counter. Her 10- and 13-year-old brothers were busy — one hoverboarding outside, one working on a Minecraft realm online. Both begged for a few more minutes. My husband was detained with a neighbor, who came over wearing a mask and gloves to help us dispose of a chipmunk stuck in our garden netting. Even my in-laws texted that they’d be late because their dog, Daisy, had run off.

The oven timer beeped: the challahs were ready. I’d forgotten the second egg wash for that golden-brown shine, but they looked fine. Our cantor guided me back to the screen with the Mi Sheberach, the prayer for healing. I concentrated my prayer on a 41-year old friend who was recovering from a stroke. My husband came in, nauseous over what had transpired with the chipmunk. We chanted the Shema. My boys joined us. Then — ding-dong — our favorite Peruvian chicken dinner was delivered to the door. In came the food, out came the Clorox wipes to disinfect the containers.

Yes, you can have fries. No, you can’t have the challah yet. I shushed everyone a lot. Just sit here, I pleaded. It’s just an hour.

Finally, we made it to the Mourner’s Kaddish. We each rose from our stools, giving the congregation a view of my stomach and the top of my little one’s head. My kids stilled, respectful, as we’d said this prayer many times since my grandmother passed away in March. The rabbi shared the prayer text with the congregation.

A neon green scribble appeared on the screen — then continued to draw two messy but distinct swastikas over the solemn words. I gasped in, shock.The rabbi gasped, too. Fiddler on the Roof music began to play as one of the participant screens filled with a black and white caricature of a person with a big nose. My boys looked at my husband and me with wide eyes, knowing something was very wrong. Then the chat box popped up with inappropriate messages — first, eerily asking if this was a funeral, then crudely suggesting it was an orgy instead. We watched helplessly, trying to process what was happening and prepare for what might happen next. This scary sensory overload unfolded in a matter of seconds. It felt like time was moving in slow motion.

Our little, liberal congregation of 600 families had been “Zoombombed.” An outsider — perhaps a bored prankster or possibly an extremist hacker — somehow accessed the annotating, audio, and chat features of our Zoom session to share hateful messages.

As the pandemic has forced organizations worldwide to move to video conferencing, Zoombombing has become frighteningly rampant. In April, for example, hackers hijacked a Massachusetts high school’s AP Chinese class with three minutes of racist messages and images. Alcoholics Anonymous meetings have been interrupted with pornography and videos of people drinking. Holocaust survivors about to speak during the Embassy of Israel in Berlin’s Holocaust Remembrance event were pre-empted with pictures of Hitler and anti-Semitic chants.

Both the FBI and Anti-Defamation League issued warnings and guidance for securing virtual meetings from hijacking, including using private Zoom links, passwords, and disabling the annotate and share screen features. Taking these extra measures come with costs, however — for example, complicating access would make attending Zoom services more difficult for less tech-savvy members, while muting attendees would eliminate our singing together.

Fortunately, our rabbi acted quickly to close his shared screen, though I don’t think my children will forget seeing those symbols of hate or the fear on my face. The administrator muted all attendees but I doubt I’ll ever unhear those first few mocking notes of klezmer music.

This was the most outright anti-Semitism I’d faced in my 43 years. My grandmother left Poland for New York in 1936; her Jewish hometown was later destroyed by the Nazi invasion. My husband and I felt lucky to raise our kids in a liberal town that closed schools on Rosh Hashanah and celebrated Hanukkah with a public menorah lighting. I never imagined I’d be targeted with my children in our own home.

We were silent, watching the rabbi. He apologized and said this was a risk of meeting over Zoom and also the exact reason we needed to be together. We continued the service, with even greater intention.

Ryan, my oldest son, helped my husband and I explain the meaning of the swastika symbol to his siblings and why it was so serious and offensive.

“That was so rude,” my daughter repeated. “I can’t believe they did that.” And also: “We should do something back to them.”

“Some people think it’s better to react to hate with love,” I told her, remembering how NASCAR driver Bubba Wallace reacted to President Trump’s recent disparaging tweet by tweeting back “love over hate every day.” Though we’ve discussed bullying at home, this was the first time we discussed hate crimes. I imagined those neon swastikas illustrating the entry for hate crime in the dictionary of my little ones’ minds, a glossary that has been recently bursting with new terms like pandemic, social distancing, police brutality, and chokeholds.

Amidst all these horrors, who would think to target our sweet, guitar-strumming mensch of a rabbi, and a congregation that always signed the Shema in American Sign Language?

We’d almost skipped services that Friday night. There was so much commotion in my home that I nearly threw up my hands and decided not to bother. While I can’t say I’m glad we were there, I’m certain this harrowing experience deepened my family’s conversations about injustice and our commitment to fighting it.

Soon after the service, the temple’s board of directors sent out an email. They notified us that they contacted the police and Anti-Defamation League, and would improve security measures for our virtual gatherings. The email also keenly noted that “as this pandemic continues, it is even more important than ever to join together as a community and tonight’s incident makes the message of Tikkun Olam even more poignant.”

I think that’s why we showed up for services in quarantine more than we ever did in person. Even if late or distracted, we helped keep our community strong. Despite wearing workout clothes and ponytails, we were there, peering into each other’s hearts and homes to find connection.

In the last few weeks, as rumors have circulated that High Holy Day services and religious school will be online this fall, friends asked whether I’d keep my kids in Hebrew school and whether I thought tuition should be reduced. I had to consider it: Sunday school in April and May was awkward and clumsy on Zoom, with repeated requests to mute yourself and unmute yourself. Hallie’s kindergarten class mostly listened to their teacher read stories. Noah’s fourth grade class barely touched the Hebrew curriculum.

If I was on the fence, being Zoombombed strangely helped me pick a side.

Witnessing such hate strengthened my resolve to keep my family connected to our local Jewish community. I’ll keep paying our temple dues and religious school tuition. I understand that building maintenance costs don’t change because of a pandemic. I don’t want the board to have to consider reducing teacher, staff, or clergy salaries.

My kids need Jewish friends and teachers, even if they only see each other on Zoom. They need leadership that advocates repairing the world and ridding it of intolerance. It won’t be perfect but, as it turns out, nothing is in a pandemic. If there’s a silver lining, I know I won’t miss carpooling or worrying about my kids’ physical safety like I did when I dropped them off after the shooting at Pittsburgh’s Tree of Life synagogue.

On Friday night, when the service ended, congregants lit candles in their homes. As the Zoom screen scanned from family to family, we could see everyone’s challahs, with crusts ranging from the lightest flax to nearly coffee-ground brown. We ended by singing the Traveler’s Prayer, Tefilat Haderech. Usually, we embrace arm-in-arm in the sanctuary. My family of five swayed in our kitchen together as a cacophony of voices took over Zoom. May we be blessed as we go on our way. May we be guided in peace. May we be blessed with health and joy. May this our blessing, amen.