Does Henry Winkler Have a Wall Full of Seder Plates in His Home? – Kveller
Skip to Content Skip to Footer

Does Henry Winkler Have a Wall Full of Seder Plates in His Home? 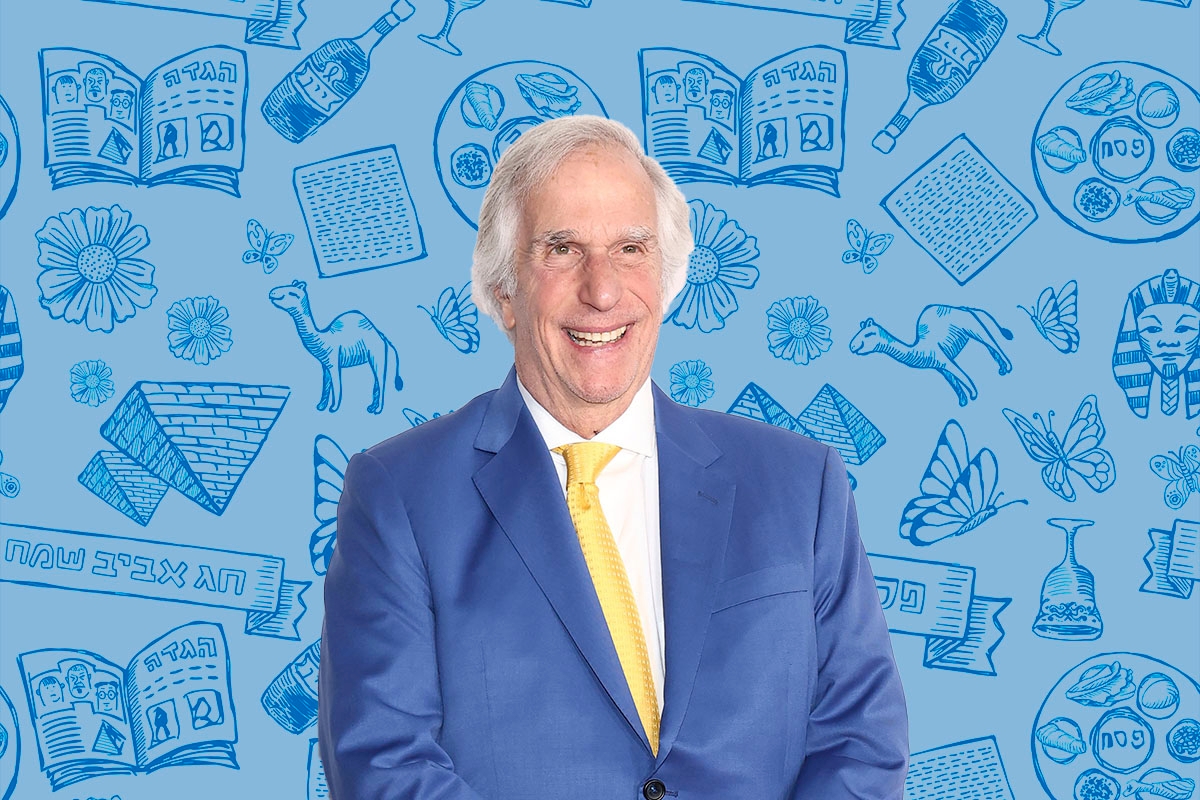 Update: This article has been updated to reflect the fact that assuming makes an ass out of me and you (mostly me!) and that these are not, in fact, seder plates.

Henry Winkler’s dances with his grandchildren are always a bit of a miracle. The actor, 77, who joined TikTok back in 2020, has been delighting us with original fruit songs and great moves for years. But a recent dance video is a riddle, wrapped in a mystery, inside an enigma.

Namely, it begs the question: “Does Henry Winkler have a wall full of seder plates?”

In the video shared on Thanksgiving, Winkler is dancing with two of his granddaughters (one of them, Frances, is actually in his arms). It’s, as always, the best. But behind him is a holiday table set for the Thanksgiving meal. And behind that is a wall filled with what appear to be round plates, all with places for six items. (For those of you not in the know, the seder plate is a central part of the Passover seder, and has room for six symbolic foods mentioned in the Passover haggadah.)

“Wait, are those seder plates on the wall?” asked Rabbi Seth Goldstein in a stitch.

Turns out the answer to that is a resolute no. As Winkler’s daughter Zoe told Kveller on Instagram, they are actually oyster plates — which her mother, Stacey Weitzman, collects. I’ve got to say that there’s something so entertaining about the only plates with room for six items I currently know of are either seder plates or oyster plates — which, as you might know, are not kosher at all (as is all shellfish.)

Now I am a Jewish person who likes oysters — and I’m hardly the only one. Aside from Stacey, I assume, plenty of Jews don’t keep kosher and enjoy the maritime delicacy. In fact, I have plenty of Israeli friends and relatives who try to incorporate as many oyster happy hours into their visits here in the U.S. — because oysters are not readily available in the Holy Land (fun fact, Winkler recently visited Israel for the first time and is going to be in a racy new Israeli show!).

For those of you who, like me, had no idea that oyster plates existed, and assumed that the plates couldn’t be anything but seder plates, here’s the low down: Oyster plates rose to popularity in Victorian era France, which is when oysters became a delicacy and hostesses wanted to wow their guests with their fancy, fancy plates. They went out of style after WWI, but they’re still beloved for decorative purposes, which honestly, I get, because they’re very pretty.

Now, if you too are struck by how aesthetically pleasing these are and are wondering if they can be used as seder plates, the answer is always: two Jews, three opinions. Meaning that if you keep kosher, the answer is probably no, it’s hard to kasherize chinaware — especially chinaware that was created for treyf (non-kosher) food. But if you’re really into the idea you can always consult your rabbi or, you know, just go for it, depending on your level of observance and love of oysters.

Winkler is of course very Jewish, indeed. His parents were founding members of the Jewish German Congregation Habonim in New York City after escaping Germany in 1939. Winkler grew up in a German Jewish community that was a home for those who had lost so many relatives in the Holocaust.

So it makes sense that he would have quite an impressive Judaica collection — and that’s obviously why we came to the above, I now realize very wrongheaded, conclusion regarding the seder plates. I mean, he is very well-versed in the Passover story — as he showed us when recounting it at 2020’s Saturday Night Seder, which he participated in because “as a citizen, even more than as a Jew, I thought it was our responsibility to tell the story as it has been told for over 5,000 years, because it’s a story about survival and renewal.”

Winkler even once admired CNN’s Jake Tapper’s seder plate on Twitter (honestly, is there anything better than complimenting a fellow Jew’s seder plate? I think not).

So here is my formal apology: I apologize for my lack of knowledge about oyster paraphernalia, and about the fact that my Jewish confirmation bias led me to believe that these were all seder plates — and to mislead you about this fact.

Thank you Henry Winkler and fam for this teachable moment. I do, however, maintain that having a seder plate collection and displaying it on your wall should totally be a thing — so props to Stacey and Henry for inadvertently germinating that idea!