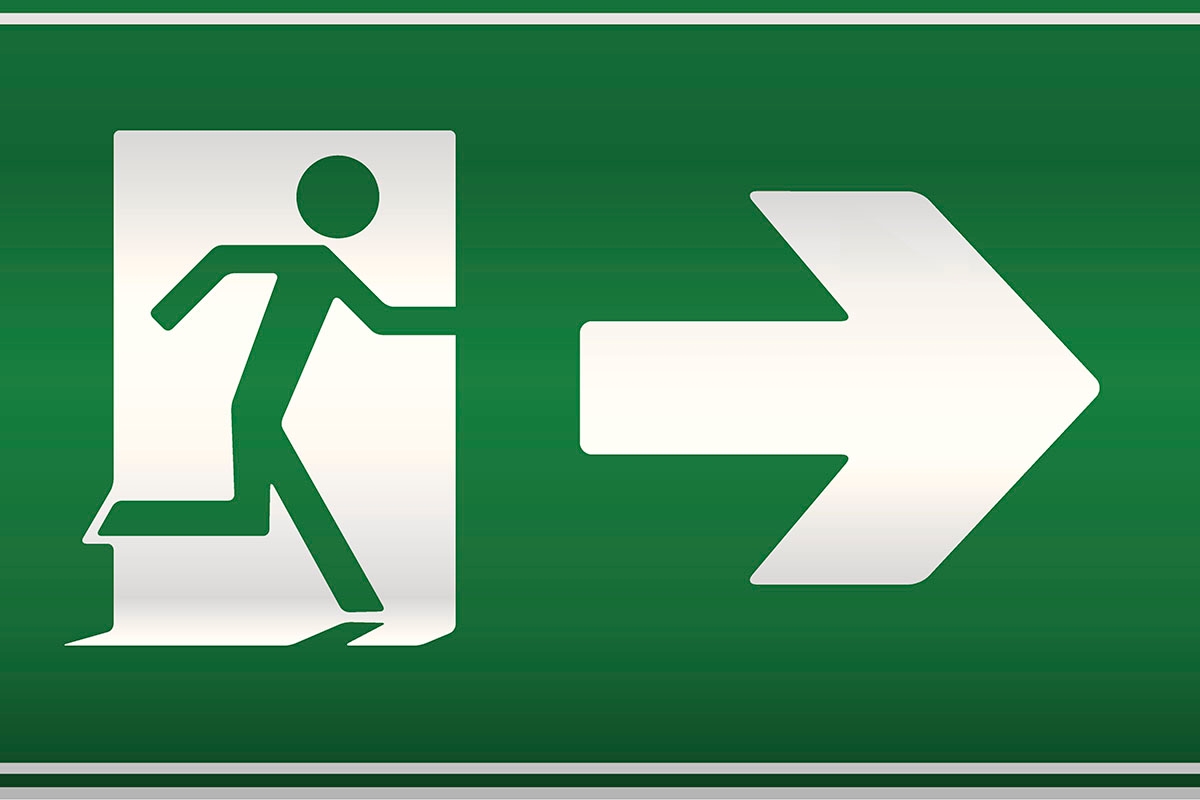 While binge watching “Schitt’s Creek” during the long months of quarantine, I saw an episode where Moira (Catherine O’Hara) is at a funeral and says to her husband, Johnny (Eugene Levy), “Let’s pilfer a few sandwiches and make a gracious French Exit.”

Maybe I live under a rock, but I had never heard this phrase. So I Googled it, and I learned from Wikipedia that it refers to guests who make a quick departure without the courtesy of saying shalom, ciao or sayonara. It’s also known as an Irish Exit. However, coming from a Jewish family, making a quick retreat isn’t something I am familiar with. When people of my faith get together, departures are slow and drawn out. In fact, I recently heard someone retell the old joke that non-Jews leave a party without saying goodbye — while Jews say goodbye and never leave.

This trait is certainly exhibited in my extended Jewish family, and I’ll admit that it used to drive me bonkers. However, being unable to see anyone in person over the course of the pandemic, I found myself longing for these drawn-out farewells.

Finally, after 18 months of only interacting with others through Zoom, and attending weddings and bar mitzvahs virtually, it’s been a true mitzvah to actually be able to be with people in person. And with these in-person get-togethers, the long goodbyes are coming back in practice. I observed it at the first post-Covid wedding I attended in May.

A Jewish goodbye is an experience to witness. The last expeditious exodus of our tribe was thousands of years ago, when Moses led the Israelites out of Egypt by high-tailing it through the parted Red Sea. Since then, we’ve been in no rush to leave more pleasant events and situations — and it can make a person meshuggeneh (crazy).

I am so thankful to have a big family with lots of aunts, uncles and cousins once, twice or 10 times removed. I am excited to see them again. But leaving a gathering takes guts, determination and sheer will. A Sherpa would have an easier time navigating Everest than getting out the front door of a Jewish home. It’s like the Yiddish version of “Ninja Warrior,” between finding a route through the masses congregating in the kitchen, avoiding the distant aunt whose name you forgot and earning bonus points for arriving at the exit without pink lipstick prints on your cheeks.

Our family get-togethers, from a casual lunch to a big affair, end with the “bag exchange.” Out come the crinkled shopping bags that were schlepped to the shindig with something someone had for another. There was my late grandmother’s photo album, which bounced around like a game of hot potato. My aunt foisted my mother with a hand-me-down wool sweater with a crewel rose reminiscent of “Little Shop of Horrors.” The nuttiest swag ever was 39 pounds of pistachios my bargain-hunter Aunt Linda got on sale and distributed at a BBQ. Maybe this tendency derives from being immigrants — it’s as if they are leaving Anatevka with their belongings in sacks.

Even phone calls with my family drag on with numerous attempts to hang up as the other person has “just one more thing” to say. Even though I phone my mom daily, I can’t end a conversation with her until I say goodbye five times before I finally hang up mid-sentence. The Zoom calls we began during Covid are a new tradition — but I didn’t spring for the unlimited version or we’d be on all day.

My husband and sons are tortured by these long “Jexodus” leave-takings. (They start complaining in the car before we even walk into a gathering.) On the final season of “Curb Your Enthusiasm,” Larry David introduced “The Big Goodbye” — his approach was dodging a person for an entire evening and then giving them a grand parting gesture as he was leaving hastily. David may be one of us, but this would never fly in our world outside TV land. Every Jewish friend I know is accustomed to this trait of interminable exits. In anticipation of these situations, I’ve come up with my own techniques for making a fast departure as life returns to a new normal. Here are my five top tips for skirting the long Jewish goodbye.

Otherwise known as “Shalom Farewell,” this approach will assure you don’t get “von ‘Trapped.’” When I start waving and humming “So Long, Farewell” from “The Sound of Music,” each member of the family will slip out separately like we are heading for the Alps.

In the Broadway hit “Hamilton,” remember what Aaron Burr sings to Alexander Hamilton? He goes: “Talk less, smile more.” Using this strategy, I’ll make up a good excuse and stick to it. The simpler the better: I have to relieve the sitter, the pet needs walking, gotta leave for an early morning trip. (I won’t divulge that the kids are too old for a sitter, the pet is a goldfish, and my expedition is just to the grocery store.) I’ll blow kisses, smile and evacuate the troops.

Don’t ghost the host! It’s rude to leave an expensive wedding or party before dessert, but I also hate being the last one standing at a table of 10 at midnight. Before the next shindig, my hubby, sons and I will agree on a reasonable time to leave. The key part of this strategy is to fuss over the party-thrower early in the night, make sure I’m seen in some photos for verification, then meet at our designated time and place… and vanish.

Summon your inner Disney princess with this “wrap trap.” Instead of glass slippers, order yourself a bundle of some discount pashminas in a memorable color. Traipse around the gathering in your signature look, and leave it on your chair well before the stroke of midnight. Everyone will think you’re in the powder room, or on the dance floor, while you’re headed home before your Uber turns into a pumpkin. (If you’re lucky, you might even have a handsome prince return your shawl the following day!)

When all else fails, you may just have to give in to the fact that Jewish gatherings are long and lively. There’s always an abundance of delicious food and noisy conversation. Honestly? There are worse fates than spending extra time with friends and family, especially after experiencing those months of isolation. In fact, maybe I’m not going to be rushing out the door anymore. I’ll tell my kids it’s a contest to see who will be last to leave — there will be plenty of competition. We may end up with the best prize of all: great memories for the future. Or maybe just a few more bags of pistachios.