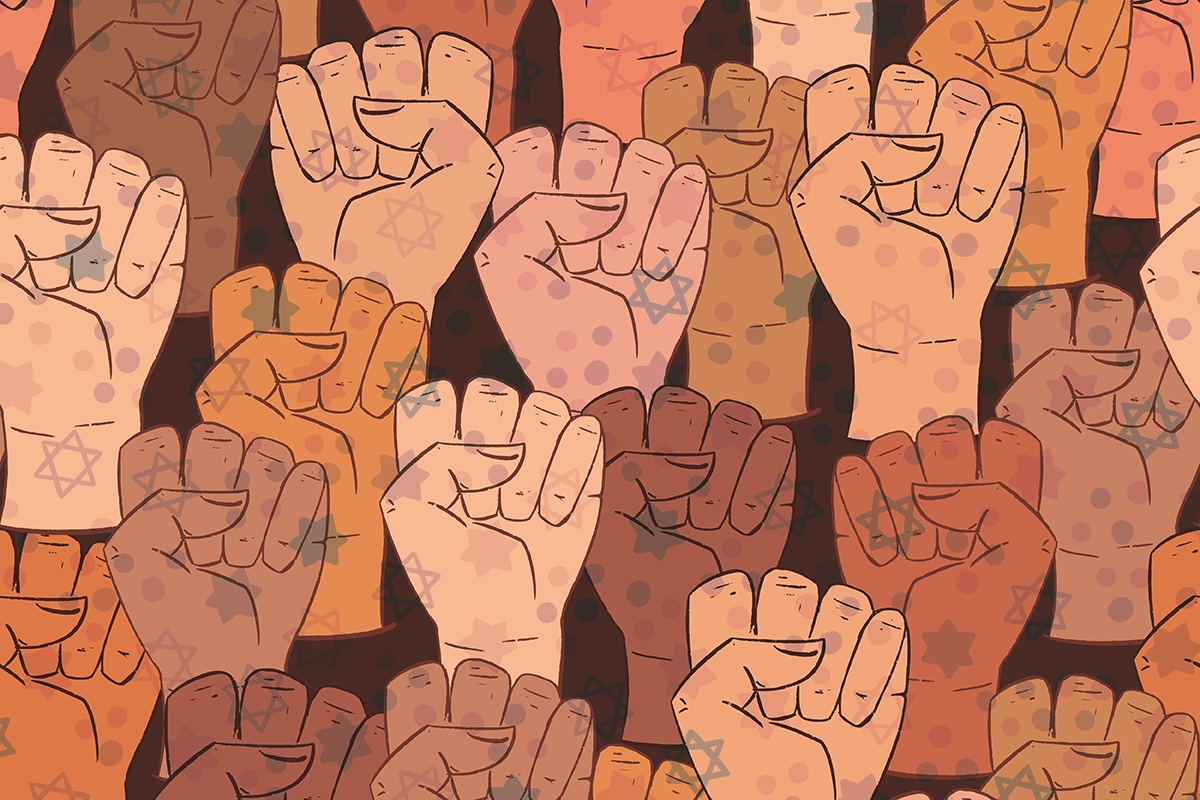 Back in June of 2020, the nation imploded. Already ailed by a horrific and badly managed pandemic — one that disproportionately affected People of Color — the killing of George Floyd saw Americans take to the streets and decry systemic racism and its deadly afflictions. We (mostly) agreed, as a country, that enough was enough.

But what about the aftermath? In the wake of the re-rise of the Black Lives Matter movement, did we do enough? Simply put, the answer for white and white-presenting Jews has to be no. As we are so often reminded, anti-racist work is not finite.

As we get ready to kick 2020 to the curb, there are some lessons that we learned this year that we can and should take with us to 2021. Of course, we can keep sharing memes and slideshows, but real change comes from actions — and there are actions that we can take to make our homes and our Jewish spaces more welcoming, equitable, and anti-racist.

Of course, as a white, Ashkenazi Jew, it’d be a bit weird for me to just rattle off on these important topics from my own limited perspective. So instead, I want to re-share some amazing words that ran in the pages of Kveller since the summer, and some conversations about race and Judaism that we held this year that I think are worth revisiting. They all come from Jewish parents who have had to think about race and Ashkenormativity for much longer than the last six months — and their perspectives are well worth heading.

What not to say to Jews of Color

Back in January, before coronavirus hit this country, Allison Barnes wrote about the micro and macro aggressions that Jews of Color experience in Jewish spaces. As Barnes, an educator and Jewish mom writes, “even in what I would consider ideal circumstances, in liberal Northern California, where I live, navigating the Jewish world as a Person of Color has often been awkward, invasive, and othering.” She created a list of nine things that you should not say to Jews of Color, and what to say instead.

What to say to your Jewish children about race

In June, as the Black Lives Matter protests were in full swing, Be’chol Lashon’s Marcella White Campbell wrote about what to say and read to your children about race. She wrote about the importance of acknowledging, seeing, and talking about race with your children, no matter how young they are — and listening to what they have to say about it, in order to gauge what they’ve already advertently and inadvertently taken in.

Campbell, Barnes, and social worker Nina Essel also joined Kveller for an illuminating panel discussion about how we talk to our children about race, and how we raise anti-racist Jewish children.

Campbell stressed that it is essential for parents to educate themselves about race. “Parents have to start with themselves. What are you modeling for your child? It’s essential,” Campbell explained during the conversation, “and it’s something that People of Color can not do for you.”

Another important takeaway from that conversation was that we need to internalize, as Jews, that not all Jews are white.

“Oftentimes, people say Jews and Jews of Color, like the Jewish group does not include the People of Color,” Barnes told us. “I think it is important that when we are saying Jews, we’re talking about anyone who falls under the umbrella of Jewish… and not just to talk about white or Ashkenazi Jews.”

You can read more highlights from the conversation and watch it below:

What to read to your Jewish kids about race

Making sure your kids’ books are diverse is important, and getting as many diverse Jewish kids’ books as possible is a great idea — and we have a list of such anti-racist Jewish books right here. When looking for diverse children’s books, we don’t just want stories of Black excellence; we want stories of Black Jews and Jews of Color just living their lives, celebrating holidays, and asking the Jewish questions that all Jewish kids ask.

This year, Kveller had conversations with three amazing Jews who are creating books about the diverse Jewish experience: Aviva Brown, an author of three children’s books, including Ezra’s BIG Shabbat Question; Sarah Aroeste, a Ladino musician and the author of Buen Shabat, Shabbat Shalom; and Natasha Diaz, the author of the excellent YA novel Color Me In. They all stressed the need for more diverse Jewish children’s books, and how these books can help us understand the full breadth of the Jewish experience. You can watch these two illuminating live conversations below:

How to make your Jewish spaces more equitable

Nina Essel, the mother of two Black Jewish boys, wrote about how we need to make Jewish spaces more welcoming for Black Jewish kids like hers.

“Regardless of whether or not your synagogue is diverse,” Essel wrote, “does your synagogue or Jewish organization hold events that explore and discuss themes of racial justice? Check the bookshelves of your Jewish preschool, are there books with racial and ethnic diversity? Do the classrooms have dolls of different skin tones? Ask that your Hebrew schools and Jewish educational organizations offer programming about Jews from the diaspora such as China, Uganda, Ethiopia, and Argentina. Ashkenazic synagogues should offer opportunities to learn about Sephardic traditions, melodies, and history. Jews have always stood up to injustice and were active participants in the Civil Rights Movement, but the fight is not over. Jewish institutions must continue this work.”

“Speak with the leadership at your synagogue, and talk with other congregants, she added, “This is not a one-time event or conversation. There needs to be a complete shift in how we, as white Jews, operate and view the world. It is a process, a journey, and one that requires us to unpack what we have learned.”

While well-meaning Jews are trying to talk to their synagogues about race, it’s important to stress that cries for activism need to be inclusive too: “You tell a group I’m in, ‘We need to acknowledge our white privilege,’ and I can not do that,” Campbell reminded us in June. By saying that from the pulpit to an entire synagogue, we are erasing Jews of Color. So we — and our leaders — need to be more sensitive.

The work continues into 2021 — and beyond! Kveller remains determined to amplify the voices of Jews of Color and non-Ashkenazi Jews, and our submissions box is always open. What other perspectives and conversations would you like to hear? How are you committing to anti-racist work in 2021? We want to hear from you — join our Kveller Moms group, and let’s continue the work and the conversation.