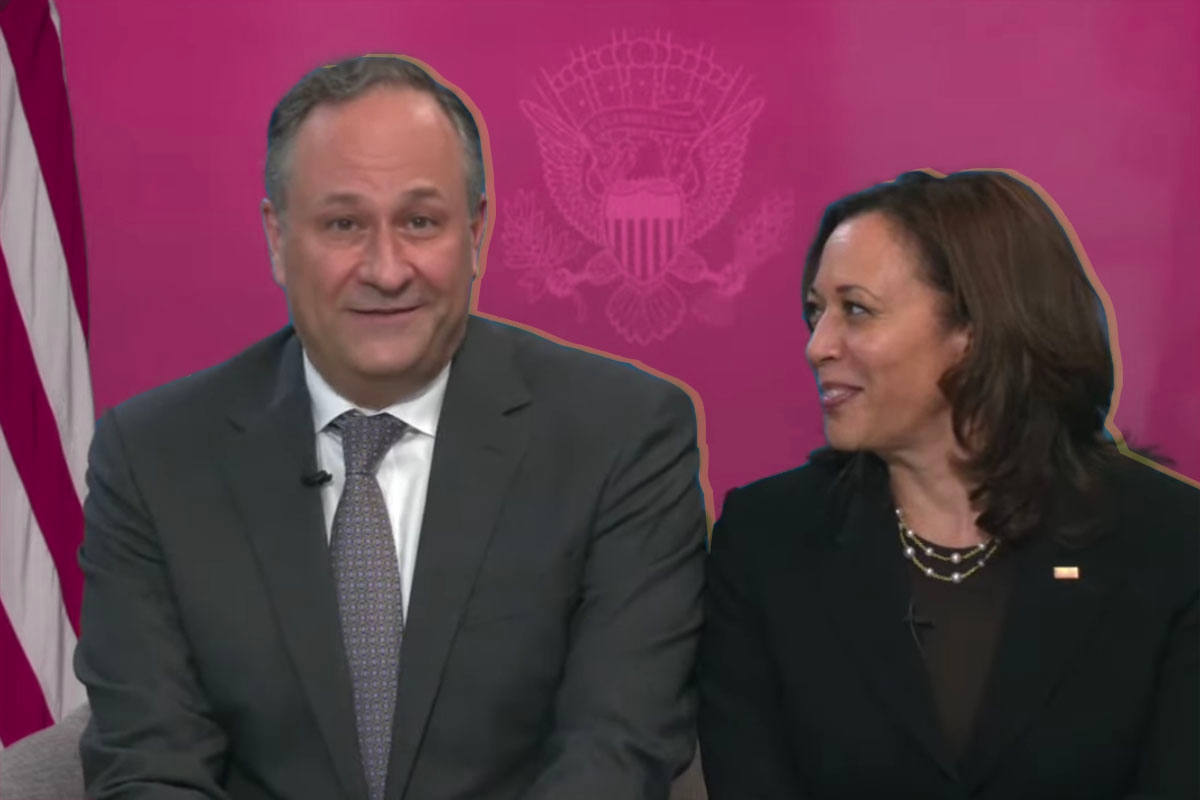 The White House Passover seder is now an established tradition — it was started by President Barack Obama back in 2009. But last night’s Passover seder was truly very different from any other White House seder night, an evening full of many meaningful and truly historical firsts.

As I watched his opening address, along with thousands of fellow Jews across the nation, I wanted to say a “shehechiyanu,” at this historic event. The entire seder  — and especially Emhoff’s opening remarks — were deeply touching and relatable, from his sweet personal anecdotes of his seders; his shout-out to his Jewish parents, Mike and Barb; and his mentioning of the women of the Passover story.

Passover, Emhoff told the assembled, has “always been one of my favorite holidays.”

“In fact,” he reminisced, “some of my best memories are my own family’s Jewish traditions. My mom, Barb, dressing me and my brother, Andy, and my sister, Jamie, in matching outfits to go over to my Grandma Anne’s house in Brooklyn for the seder.” These kinds of memories — of getting dressed up for the festive (and long!) family seder — are ones that are in all of our collective Jewish memories. Though, as a seemingly surprised Harris later lamented, Emhoff really should have brought some photographic evidence of these matching outfits!

“Now, of course, it’s exactly what you picture, that apartment, the plastic coverings on the sofa,” Emhoff continued, triggering many viewers’ sense of nostalgia once more. “The smell of the brisket wafting in from the kitchen, and me sitting there at the table waiting, just waiting to dig into that delightfully gelatinous gefilte fish.”

OK, so while we can all recall hungrily waiting to finally finally eat at family seders, we don’t all necessarily have recollections of brisket smells, or even a shared love of gooey and grey gefilte fish. Personally, however, I’m team Emhoff on this one! The thought of my grandmother’s gefilte still makes my mouth water, and it turns out Emhoff still “inexplicably” loves the gefilte to this day — “especially with that red horseradish.” (I’m team white horseradish, but I’ll take it.)

After taking us down memory lane, Emhoff then took us to the Passover story: “It’s a story that’s both ancient and resonant,” he said, adding that it “inspires and informs the struggle for justice to this day.”

Emhoff urged us this Passover to talk about the unsung heroes, past and present — including, of course, the teachers, first responders, grocery store clerks, and medical professionals who have all worked tirelessly through this pandemic.

“We should also talk about the women who’ve earned their own chapters in the history books, then and now, the often neglected women in the Passover story, including the midwives who saved Moses, the mother who nursed him, the Egyptian princess who spared him the pain of slavery, the sister, a prophet in her own right, who watched over him, and ultimately led the Israelites in a song of liberation,” he said.

Emhoff took inspiration for this part of his speech from the National Council of Jewish Women supplement to the Haggadah, “The Five Women of the Exodus,” but we’ll choose to believe that he was inspired by the Kveller article published the day before about how to honor these amazing women at your seder table.

He then gave the mic to Rabbi Sharon Brous of Los Angeles, who led a mock seder with help from a smattering of influential guests, including Anne Neuberger, the deputy national security adviser for cyber and emerging technologies, and Jonathan Cedarbaum, the legal adviser to the National Security Council — and, of course, President Joe Biden and First Lady Jill Biden.

“If we learn anything from the haggadah is that our task isn’t to discard painful memories, it’s to turn that memory into purpose,” the first lady poignantly told the crowd, as both she and the president mentioned all the empty chairs at the seders this year, and all those we lost to the pandemic.

President Biden took the opportunity to allude to what we say at the end of the seder: “Not only year in Jerusalem, but next year in person.”

“On behalf of our entire family, chag shameach,” Biden said, using the Hebrew term for “happy holiday” (his pronunciation was… OK), and reminding us that some of his family will indeed be celebrating Passover this year.

At the conclusion of the night — which also featured some adorable singing from students at the Milton Gottesman Jewish Day School of the Nation’s Capital — a kvelling Emhoff took the opportunity to do what he said is one of his favorite things to do in life: introducing his wife. He lovingly nudged Harris’ shoulder as she smiled and him and said, “Thanks, Dougie.”

“Our family, like so many families in the United States, in the state of Israel, and around the world, will begin to celebrate the sacred holiday of Passover this weekend,” Harris said. “This year, as we dip our greens in salt water, and pour out our ceremonial wine, and eat our bitter herbs, let us recommit to repairing the world.”

She concluded the evening with another, “Next year in Jerusalem and next year in person.”

It was a wonderful way to end the night — a reminder of the interfaith celebration that will soon take place in the Naval Observatory, full of rituals so many of us are about to perform in our own homes this Saturday night. How amazing that so many people were able to watch this White House seder together — and if you missed it, you can catch the whole thing here. For all of us about to go into another pandemic seder, this virtual event was truly a balm for the soul.

Next year together, indeed. And next year, please bring those childhood Passover pics, First Gentleman Emhoff!