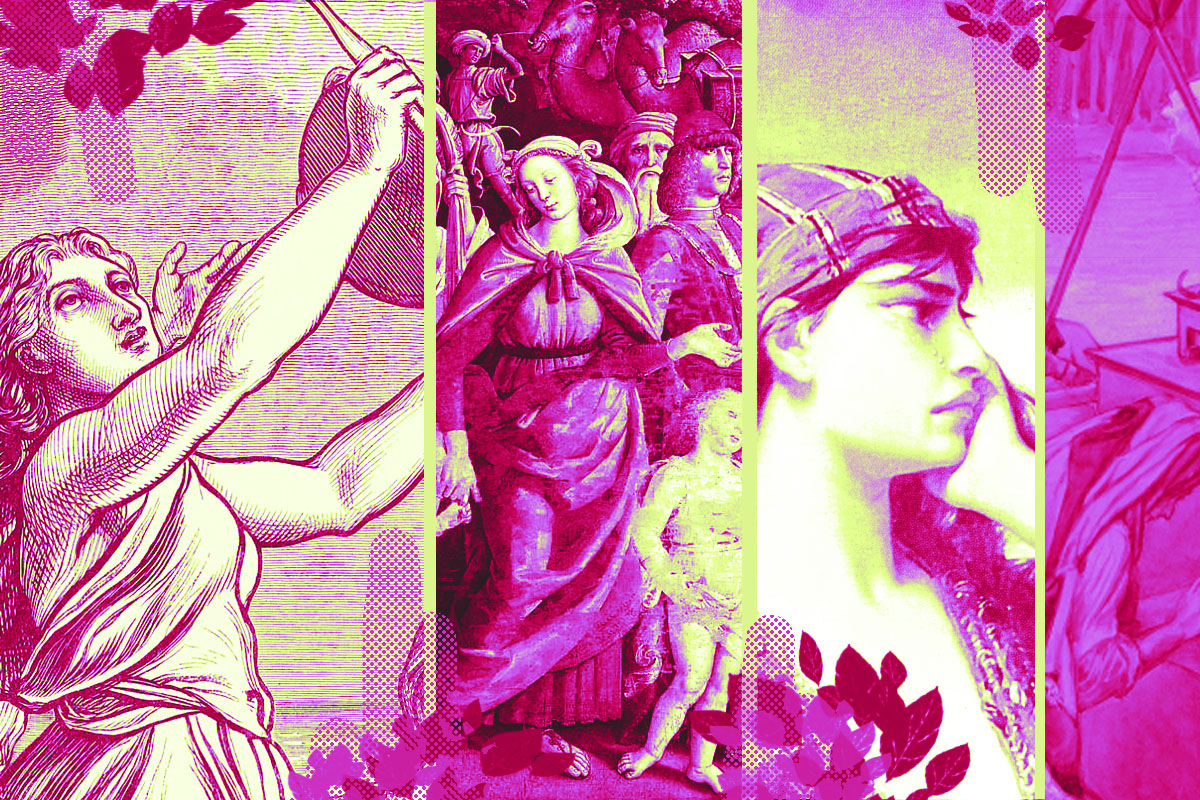 I first learned about Miriam’s Cup more than 20 years ago. I remember being excited to include this new Passover ritual in my family’s seder — especially because it acknowledged a woman (yes, a woman!) who played a crucial role in the Exodus story.

Miriam is certainly worthy of being honored during the seder — after all, she was the one who watched over her baby brother, Moses, after their mother put him in a basket in the Nile River in order to save him from certain death. It was Miriam who took her timbrel and led the women in song and dance after the Israelites crossed through the Red Sea from slavery to freedom; and, according to legend, while the Israelites were wandering in the wilderness, Miriam was accompanied by a well of water that sustained the people.

There are lots of different ways people perform the ritual of using Miriam’s Cup during their seders. In my family, at the beginning of the seder, we each pour a little water from our own cup into our special Miriam’s Cup, symbolically showing that we each have a part in nourishing and sustaining the Jewish people — whether we are Jewish ourselves, or partnered with a Jew, or otherwise connected to the Jewish people. We also recite the verse that’s commonly associated with Miriam’s Cup: “Zot Kos Miryam, kos mayim hayim, zeikher l’yitziat Mitztrayim,” which means, “This is the Cup of Miriam, the cup of living waters, in remembrance of the Exodus from Egypt.”

I love that including Miriam’s Cup — which was first introduced in the 1980s — has become so popular that a quick search for “Miriam’s Cup” online elicits lots of beautiful options for this new(ish) ritual item. I’m thrilled that people are learning about and celebrating Miriam and her important contributions to the Passover story. And yet, there are also other women who played a crucial role in the story, women who may be mentioned in the Torah but aren’t very well-known today.

We need to raise up their stories too, so that they can be remembered and celebrated along with Miriam. Otherwise, I worry that people will see Miriam as an exception — a token woman who helped the Jewish people survive. The recognition of other important women in the story in no way takes away from Miriam’s essential role; it just shows that she was not alone. (Think of Vice President Kamala Harris: As people have pointed out, it’s amazing to have a Woman of Color as vice president, but the real progress will come when there are others like her, and it no longer feels unusual.) By seeing a diversity of figures who are brave, compassionate, clever, and God-fearing, we internalize the idea that no matter who we are, we have the potential to make a difference in the world.

So, whether your seder is on Zoom or IRL, when you sit down to your Passover table, consider honoring these five incredible women:

The Hebrew Midwives Shifra and Puah

These two brave women engaged in the first recorded acts of civil disobedience. When Pharaoh ordered that all Israelite males born should be killed, Shifra and Puah refused to do so. In disobeying Pharaoh — and honoring God’s will, rather than the political authority of their time — these Hebrew midwives saved countless Israelite males, and were recognized by God for their courage.

How to honor them: Put a picture of someone you admire — particularly someone who has engaged in civil disobedience — on your seder table. You can also invite anyone you are sharing seder with to also pictures, online or in person. You can explain how Shifra and Puah saved many male Israelite babies and discuss others throughout history who have engaged in civil disobedience.

After giving birth to Moses, Yocheved saved his life by hiding him for three months. Then, when he became too old to hide, she put him in a basket in the reeds by the bank of the Nile. When Pharaoh’s daughter (more on her in a moment) took the baby in, Miriam — who had been watching over her baby brother— offered to find Hebrew nursemaid for the child. Who? Yocheved! And so, Moses’ mother would go to the palace every day to nurse her own child. But while it was known that she was a Hebrew, nobody in the palace knew that Yocheved was actually Moses’ biological mother.

How to honor her: Place a pacifier or the nipple of a bottle on your seder plate. This will surely provoke questions — Passover is all about questions, after all! — and you can explain to your guests how Moses’ mother saved him. You can also honor Yocheved by having the adults in your family share memories about their own mothers, or other women who played important roles in their lives.

Pharaoh’s daughter was bathing in the Nile when she saw a basket among the reeds. When she opened the basket, she saw a baby Hebrew boy inside. (How did she know the baby was a Hebrew? The Torah doesn’t tell us, but it’s possible she knew because of the way he was circumcised, or what he was wearing.) Pharaoh’s daughter took pity on the infant, and she took him in, paying Yocheved to nurse him. Pharaoh’s daughter then adopted him and named him Moses. Interestingly, this woman who raised Moses as her own child is simply referred to in the bible as “Pharaoh’s daughter,” she’s never even named. But in Jewish tradition, she is called Batya, which means “daughter of God.”

How to honor her: You can place a small basket on the table, reminiscent of the basket in which she found Moses, and express gratitude to Pharaoh’s daughter for adopting him. You can talk with your family about how Pharaoh’s daughter was an Egyptian, but she adopted a Hebrew boy. Even back in biblical times, there were different kinds of families! You can discuss how there are many types of families today: LGBTQ+ families, interfaith families, single-parent families, biracial families, adoptive families, and more. Discuss with your kids what it is that makes a family.

Moses’ wife, Zipporah, the daughter of a Midianite priest, was the mother of his two sons. In a truly bizarre incident in Chapter 4 of the Book of Exodus — the meaning of which has been the subject of much debate — while Zipporah and their sons were accompanying Moses on his way back to Egypt to free the Israelites, the family stayed at an inn. God seemingly came to kill Moses because he hadn’t circumcised his son, as was the responsibility of the father. So, Zipporah took it upon herself to do what Moses should have done: She circumcised her son with a flint knife. She then touched Moses with the foreskin and blood of the circumcision and said: “Surely you are a bridegroom of blood to me!” Thanks to her bravery, God left Moses alone after that and didn’t try to kill him.

How to honor her: You can place a ring on your seder plate, as Zipporah was Moses’ wife. If people ask about the ring, share her story! You can also talk about the fact that Zipporah was Midianite, not Israelite, and thus Moses’ marriage was what we’d call today an “interfaith marriage.” Discuss what partners of Jews who aren’t themselves Jewish that you know have contributed to the Jewish community.

Remarkably, all of the above women saved Moses’ life in some way, yet most people don’t even know who they are! It’s time to rectify that. We have the power to change things so that these women are no longer ignored — let’s start this Passover by honoring these exceptional leaders.