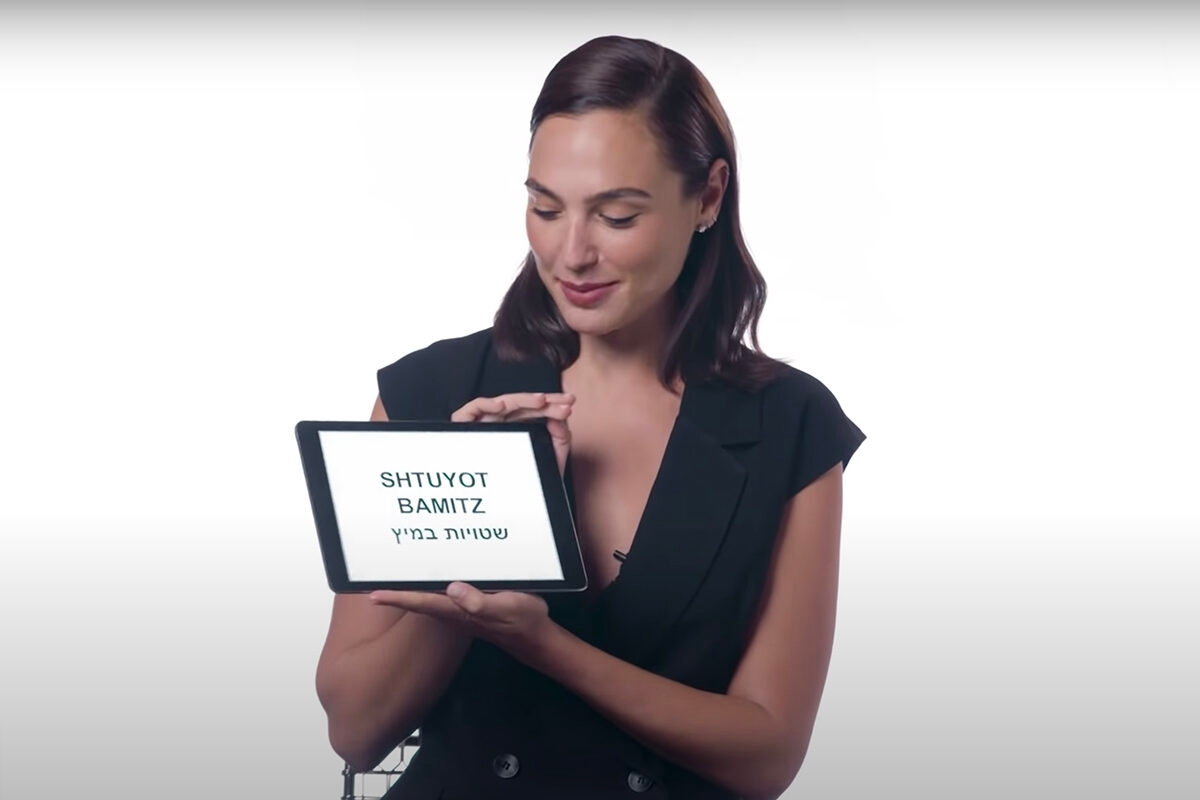 Vanity Fair recently released an interview with Israeli actress Gal Gadot, in which the successful Wonder Woman star talked about everything from the “sack of guilt” parents carry (Gadot has two daughters, Alma and Maya), to the Jewish prayer that keeps her grounded.

To go along with the interview, the publication also recorded Gadot teaching some choice Hebrew slang. (Back in 2017, Natalie Portman did a similar video for Vanity Fair — I highly recommend you watch that, too!) The video is truly adorable — Gadot is so lovely and fun to watch. However, it’s also a bit flawed. The explanations for some of the slang terms and words that Gadot offers are a little inaccurate — though, to be fair, Hebrew slang, which often derives from Arabic, Yiddish, and other languages, is really delightful — but it can be a bit complicated, and Gadot seems to be giving her answers on the fly.

So let me, a native Hebrew speaker with free time on my hands, break down and expand on Gal Gadot’s Hebrew slang lesson, one saying at a time:

Achi — Literally “my brother,” but really it’s more like “bro.” Gadot definitely gets this one right. You can also use achoti (“my sister”) as “sis.”

Para, para — It means “cow, cow,” but it’s used to say “one thing at a time.” It’s usually used to tell someone who is rushing to do too many things at once to hold up, “para, para!” You can do the same when someone pressures you to rush through something —  just yell “para, para!” at them. It’s very effective.

Bli ayin ha’ra — The Hebrew version of the Yiddish kinehora, which means “without the evil eye,” you can also add “ptu, ptu, ptu” and “hamsa, hamsa” for extra evil eye warding — as Gadot demonstrates in the video. This one is an indispensable saying for most Israelis.

Havla”z —  This one is abbreviated from chaval al ha’zman, which is literally “shame on your time,” but really it means something that is beyond amazing. People don’t really use havla”z anymore, but the full version is still a popular way to say something is really incredible. “The Wonder Woman 1984 trailer? It’s so good that it’s chaval al ha’zman!”

Pa’am shlishit glida — This literally means “third time ice cream,” and it’s a complicated, charming little bit of slang. Gadot explained it as “third time’s the charm,” but it’s not really what it means. It’s kind of a joke greeting when you see someone twice, unexpectedly, in a short amount of time. You tell that person — “pa’am shlishit glida,” a cheeky little saying which implies that the third time we meet, let’s get ice cream. Cute, right?!

Tachles — Gadot translates this as “what’s the bottom line.” Tachles comes from the same root as the Hebrew word for purpose, tachlit. It really means, let’s get to the real purpose of this — let’s be honest, and real — let’s speak tachles.

Yalla — Yalla comes from the Arabic “ya allah!” (oh, God!) — which is another popular Israeli slang expression for surprise or excitement about something. But mostly it means “let’s go” or “c’mon.” It’s very much part of the Israeli ethos of getting things done fast and not dawdling. (OK, so maybe not everyone has that ethos, but Gadot demonstrates it well!).

Esh — Esh is the Hebrew word for “fire,” people use this one in the same way in English as they do in Hebrew, when something is fire, well, it’s fire, like Gadot’s actions scenes in Wonder Woman are esh.

Ma ani, ez? — This one literally means “what am I, a goat?” Gadot adorably translates it as “what am I, a dummy-dum?” (The mom-speak is strong with this one!) But it’s basically something you say when you feel ignored or left out.

Ma pit’om — This literally means “what suddenly?” It’s a Hebrew expression that means “no way.” Like if you asked me if I hated Hebrew slang, I’d reply, “Ma pit’om, I love it (duh, have you not read this piece?)!”

Shtoyot be’mitz — This is such a cute one, and it means “nonsense in juice” — basically, that’s bull! The full saying is actually “Shtuyot be’mitz agvaniyot” — nonsense in tomato juice. Like if anyone told me Gadot was “plain” I would say, that’s shtuyot be’mitz.

Rosh kroov  — This literally means “cabbage head,” a head that’s as empty and hollow as a cabbage, a dummy. It’s also the name of a popular ’70s Israeli kids’ show. Behold:

Af/a aleicha/alaych/aleichem — This means “flying on you,” like you’re crazy about someone. You can also can fly on an object. Like, I’m flying (ani afa) on these new tie-dye sweatpants. Just to clarify which one you should use af (male singluar) OR afa (female singular) OR afim/afot (male/female plural) + alaych (on you, singular female) OR aleicha (on you, singular male) OR aleichem/aleichen (on you, plural male/female). Phew!

If you’ve stayed with me through all this, I’d like to introduce you to a slang saying I like to use: “Ivrit safa kasha.” It means “Hebrew difficult language” — and yes, the bad grammar is there on purpose. It’s been popularized to say with a fake Russian accent, but I personally don’t support xenophobic jokes about Russian immigrants so I just say as is. I actually say it every time I get a Hebrew word or saying wrong, which happens a lot.

Hebrew is a complex and wonderful language, and it’s only human to get things wrong — even when you do play an actual superhero like Wonder Woman.