Henry Winkler Being Himself Was the Best Part of the Emmys 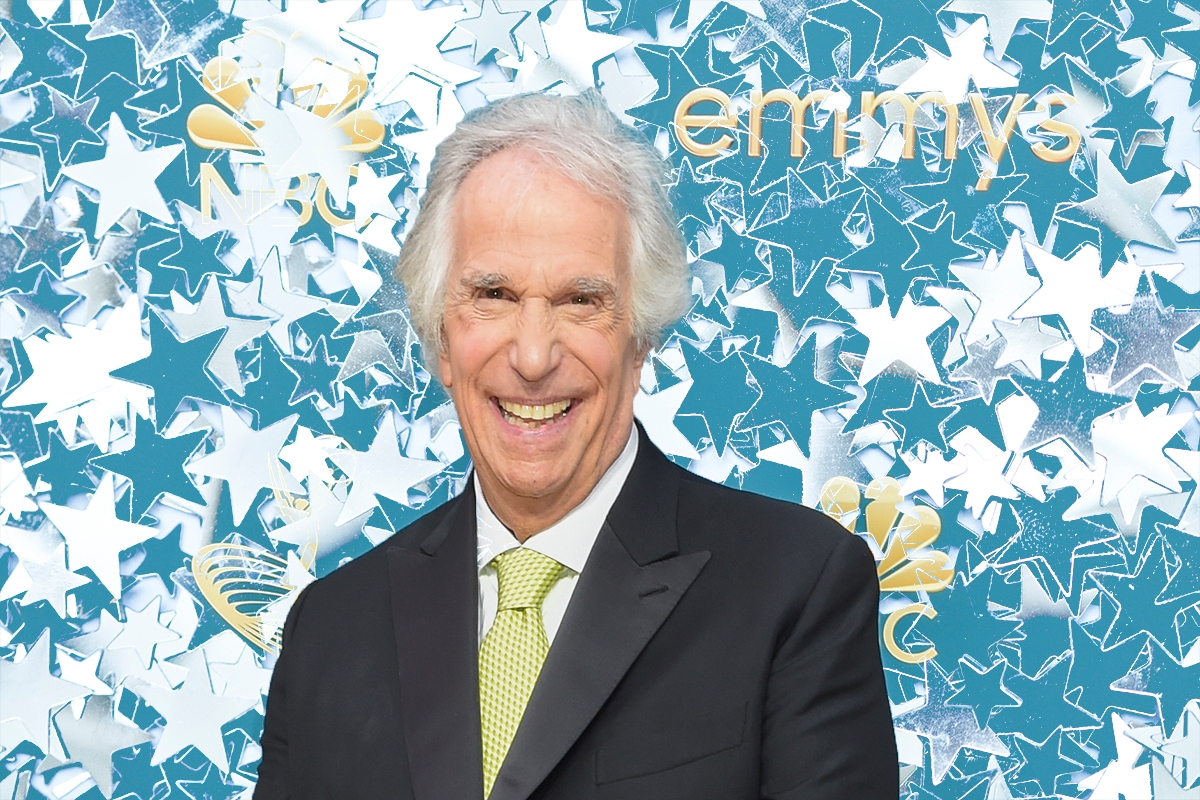 Seventy-six years ago, we all got a gift from the universe: the treasure that is Henry Winkler. Ever since then, the prolific actor everyone still calls “the Fonz,” the beloved Jewish dad and grandpa, and the Emmy award-winning star of “Barry,” has been giving us a lot of pure unadulterated joy. (I mean, if you haven’t seen the picture of Henry Winkler riding a camel, have you truly lived?!)

That joy was definitely abundant last night at the Emmy Awards.

Winkler didn’t win an Emmy last night (but beloved nice Jewish boy Brett Goldstein did for his role in “Ted Lasso,” so we can’t be too mad), but he did win the Emmys in general, in our humble opinion. If you search the internet for Winkler pictures and videos from last night, you will find an absolute trove of Winkler gems.

What is it about Winkler that makes him just so lovable? It’s his positive outlook for one (he has the best smile!), but also his ability to joyfully and meaningfully engage in such a wide range of things. Winkler was not only kvelling for the other winners and honorees of last night out of kindness; it was clear he has watched many of their shows and had thoughtful, meaningful responses to the cast and crew and showrunners. Seriously, if there was an Emmy for audience participation, Winkler would win it every. Friggin. Time.

Without further ado, here are our favorite Winkler moments from the 2022 Emmys:

1. When he found out what DILF means:

When Mario at Access Hollywood explains the full meaning, Winkler is stunned. “No!!!” he says, before joyfully raising the notecard with the tweet in the air. “I’m going to keep this one!”

You deserve it, Henry.

Henry Winkler learned a new vocab word while reading a thirst tweet at the #EMMYs 😭 pic.twitter.com/aaP2vH6yX1

2. When Henry really, really tried to get a selfie with Lizzo:

Just like us, Henry Winkler is part of the cult of Lizzo. He’s a Lizzbian, if you will. Throughout the night, the man tried to get a selfie with the pop singer (and now Emmy winner! Mazel tov, Lizzo!). Here he is caught hovering while Lizzo and Zendaya were having a moment.

And here is the final result: a punim with a smile like this I have never seen. The kvelling is strong with this one.

“Abbot Elementary” is the sitcom sensation of the season — and for good reason, it’s an absolute gem of a show. Henry Winkler concurs. On the red carpet with ET, Winkler gave the show’s star Tyler James Williams a compliment that moved him so much he appeared to tear up (honestly, wouldn’t we all tear up if Henry Winkler complimented us?).

“Let me just say what a wonderful, soothing teacher he plays, I wish I had a teacher like that in my life,” Winkler told Williams, who turned his head away to hold back tears.

Williams returned the favor with a beautiful compliment of his own: “The amount of empathy that you bring to your work, to hear that resonate in you as a person,” he told a beaming Winkler, “that’s beautiful.” OK, now we’re crying, too.

Winkler spent the rest of the night collecting selfies with the stars of his favorite show. Seriously, we need access to Henry Winkler’s camera roll from last night, because we’re sure there are gems that are missing here.

A most lovely group of human beings

4. Henry and his wife, Stacey Weitzman, made the night for Connie Britton:

Connie Britton absolutely killed it in “The White Lotus” last year, inspiring the awe of one fan in particular — Henry Winkler’s longtime wife, Stacey Weitzman. When Britton was introduced to Winkler, who is, apparently, a hero of hers, he turned right back around and beckoned Weitzmann to meet her own idol.

“And I’m Henry and you know what, my wife adores you,” he said, ushering Weitzman over.

“Wow, you are so good,” Weitzman tells Britton, awe-struck, as Winkler reverently exclaimed: “Connie B!”

“You’re making my whole night, I can go home now,” Britton told the adoring Weitzman. Our night too, Connie, our night too.

Here’s Winkler with Connie B and NJB Andrew G:

5. Winkler shared a nice tidbit about a Jewish geography connection with another Jewish TV creator:

We’re all currently obsessed with the cringe and suspense fest that is “The Patient,” the very Jewish FX show from the creators of “The Americans.” And apparently, show co-creator Joel Fields and Henry Winkler go way, way back. After being asked what show he’d love to be in, Winkler, starting off with “The Bear,” then mentioned “The Patient” which he just started watching. “The young man, Joel Fields, [I] met him when he was 9 doing magic in Toronto. [He] did ‘The Americans’ and now is doing ‘The Patient'” Winkler recounted. (What he didn’t mention was that his father was the rabbi of the largest synagogue in Toronto, fun fact.) Truly, is there anyone Winkler doesn’t know??? (Case in point: Check out this picture of him and a longtime friend of his daughter Zoe — Kim Kardashian.)

Henry Winkler says he'd love to be on #TheBear. | Variety On the Carpet presented by @DIRECTV #Emmys #Emmys2022 https://t.co/UW947lytXO pic.twitter.com/cxZyS5cLB2

“He goes from job to job and you never see a ripple in the water,” Winkler says about Hader’s many hats in the show. “He makes decisions, he’s generous, he’s precise, he’s demanding, he’s warm, all in the same moment — how can you beat that?” Can Henry Winkler give a TED talk about giving compliments? Because truly, the man is a master.

#Barry star Henry Winkler on the best part of working with co-star Bill Hader: “He’s generous, he’s precise, he’s demanding, he’s warm, all in the same moment. How can you beat that?” #Emmys #Emmys2022 | Variety On the Carpet presented by @DIRECTV https://t.co/UW947lxW8g pic.twitter.com/HaPvWNkRDr

Also, Bill Hader was one of the only people in the crowd to wear a mask, and we really have to respect that:

Bill Hader in a kn95 at this packed event is the dad at school orientation who knows the name of his kid’s pediatrician.

7. Henry Winkler gets verklempt talking about his Emmy nomination:

When asked by Variety about his Emmy nomination, the veteran actor got genuinely emotional. “I love my job,” he said, “I’m very honored that I was nominated. After that you don’t know,” he said, making the kind of face your Jewish grandpa makes when you make him very emotional. “But I’m included in the club.” Is there any club that wouldn’t have Henry Winkler? We wouldn’t want to be any part of it.

#Barry actor Henry Winkler says it's an honor to be nominated: “I love my job.” #Emmys #Emmys2022 https://t.co/UW947lytXO | Variety On the Carpet presented by @DIRECTV pic.twitter.com/XttqWyPiLE

Is there anything better than an old (said respectfully!) Jewish man’s genuine delight at a particularly cheesy joke? Henry truly embodied that when Kenan Thompson made a joke about Zendaya, who is 26, being young enough to play a high school student but too old to date Leonardo DiCaprio.

henry winkler behind her 😭 pic.twitter.com/fwvhTav87L

I mean, seriously, look at this smile, we need to take a Lactaid to get over it:

OK, we’re all obsessed with “Hacks” stars Hannah Einbinder and Jean Smart, and Henry Winkler is pointing to them on the red carpet like he’s just discovered the greatest thing since pastrami sandwiches (yes, he’s a fan!). We agree.

Henry Winkler representing all of the Hacks fan in front of Jean Smart and Hannah Einbinder: #Emmys2022 #Emmys pic.twitter.com/X73KRu0tP3

These are just some choice tweets of the many, many joyous ones spurred on by Henry Winkler’s mere existence last night.

We need to pause now and then to appreciate that Henry Winkler became famous for playing a character who was the epitome of detached coolness, when in reality he is a totally sincere dork. Just a gem of a human. https://t.co/OLgX6uj2Dl

the real winner of tonight is henry winkler. not one photo of him looking anything less than just ecstatic to be there and included in the festivities. absolute sunshine of a human being. favorite person on the planet.

Thank you for all the smiles, Henry Winkler. May you live to be 120, and beyond. Seriously, please protect Henry Winkler at all cost!!!

bill hader said “i won’t be the one to kill henry winkler” and i respect that https://t.co/9KkIAJHDu4