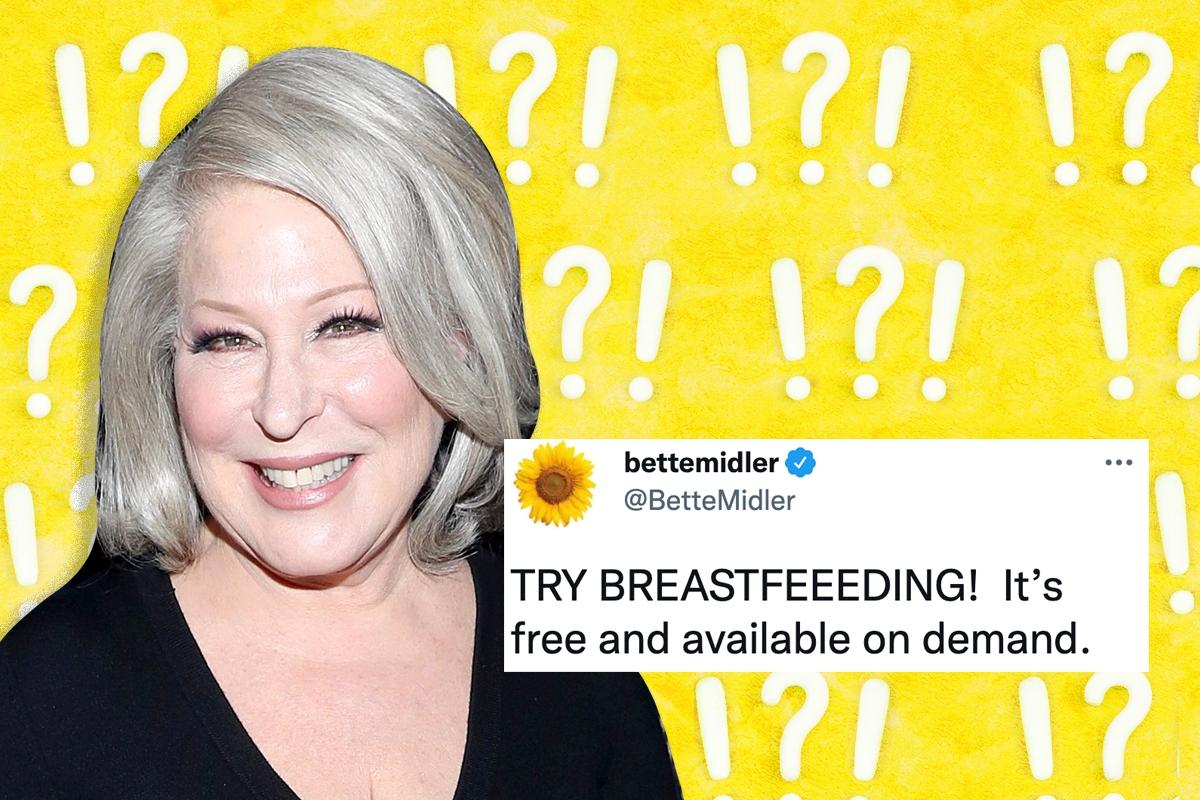 Welp, Jewish diva Bette Midler put her admittedly very talented foot in her mouth again, this time when she made a Twitter comment about breastfeeding in relation to the current, very worrying, and potentially lethal formula shortage currently facing the U.S. Over 40% of baby formula supplies are currently out of stock due to a recall at an Abbott Nutrition plant in Michigan, putting some parents, especially in lower-income families, in severe distress, unable to find enough to feed their infants.

There are few things in this world more shattering than not being able to properly feed your kids. Yet in response to a tweet highlighting the problematic nature of baby formula companies, Midler responded “TRY BREASTFEEEDING! It’s free and available on demand.”

I have no words for this absolutely callous and heartless response to this crisis. It’d be one thing if this was just an unhinged comment by one celebrity, but it is a repeated sentiment that you can find in many tweets and comment sections of articles reporting on this crisis, and it is oh-so-wrongheaded.

First things first — breastfeeding isn’t free. To be able to breastfeed your kid, you need to be able to either afford to be a stay-at-home parent, or to have a workplace where pumping is feasible — and pumping, to be fair, is hard AF, takes a lot of time and can be stressful even if your workplace has the most luxurious of pumping rooms, which most workplaces do not.

So yes, breastfeeding literally costs hours of labor, and for working moms, that’s not chump change they can afford to forfeit.

Just as importantly, breastfeeding is also not always available on demand — as Jewish mother Ilyse Hogue, the former president of Naral, wrote in response to Midler: “I had twins. I didn’t produce enough milk for both. Without formula, I would have had to have chosen which one got to eat. To say nothing of kids that get separated from the birth mothers very young.”

There are so many things that affect a woman’s ability to produce milk — traumatic births, health, and yes, not every new parent also carried that baby.

Following the very understandable backlash to her tweet, Midler doubled down and cited some very antiquated notions about formula: “No shame if you can’t breastfeed,” she wrote, “but if you can & are somehow convinced that your own milk isn’t as good as a “scientifically researched product”, that’s something else again.”

Um, Bette, literally no one thinks that anymore — at least not in America, the land of crunchy Instagram and TikTok momfluencers, of Whole Foods, and Goop, where this shortage is currently happening.

As someone currently breastfeeding basically on demand for going on almost a year, I can also say that nursing is not free in other ways — it has a mental and physical price. It is hard. It is tiring. It hurts. It’s emotionally depleting. And just like any decision around a woman’s bodily autonomy — it’s a decision that every nursing parent needs to make for themselves, and one that you don’t need to justify to anyone.

Dear Bette, from one Jewish mom to another, I have to tell you that at a time when our bodily autonomy is so under attack, shaming anyone who chooses to feed their baby formula is just not a good look.

You don’t need to be in a defensive crouch if you didn’t breastfeed for literally any reason. It’s not a moral failure and you don’t owe anybody an explanation about how hard you tried.