I’m Not Jewish But I Am a Jewish Mom 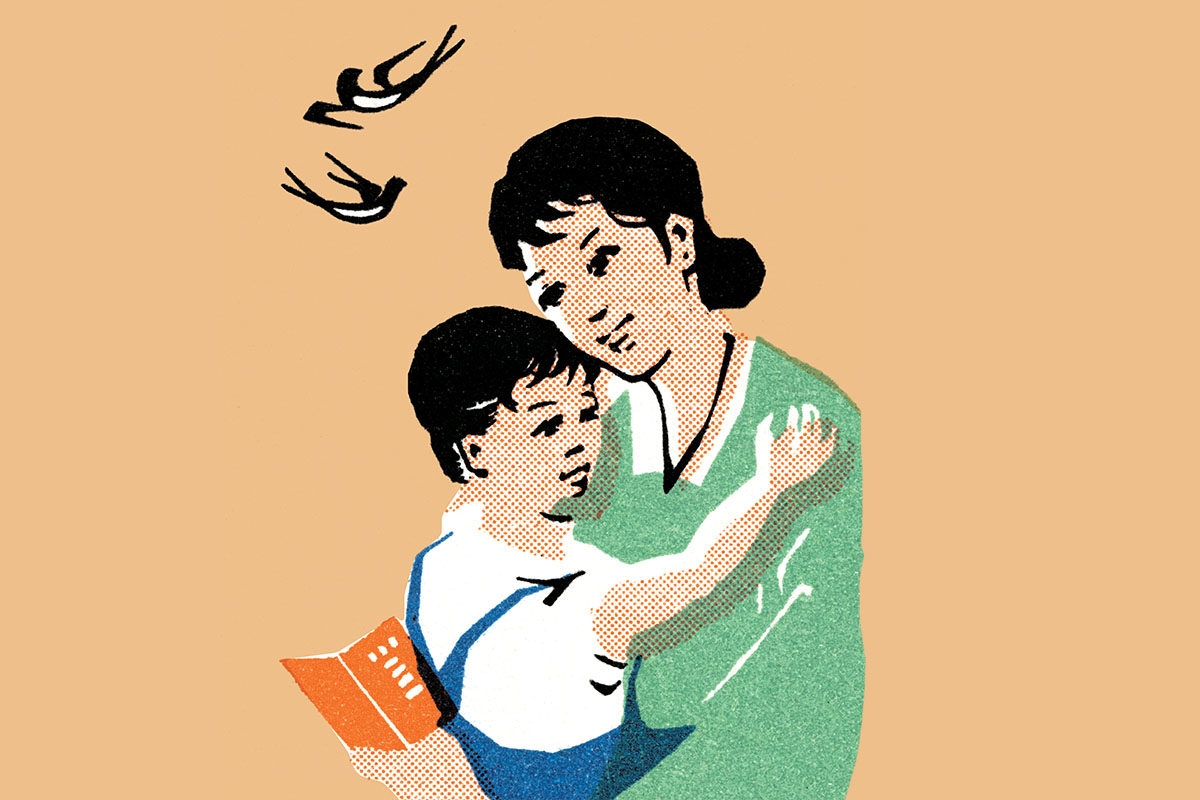 “Just stick already!” I’m near tears as I pinch the corners of the hamantaschen into shape aggressively. This is the third time I have attempted these impossible cookies in the past 10 years and I always forget how long they take. They are too thin and rip, or too thick and get gummy. If I don’t get the folding right, they gush out one side and burn.

To make matters worse, this time, my two-and-a-half-year-old son, Eli, is trying to “help”. I realize pretty quickly that hamantaschen are not cookies you want a toddler to help with. It doesn’t work. So when he finds a spoon and decides to just start eating the lekvar — aka prune butter — I made for the filling, I decide to look the other way (no matter the consequences).

I am reminded suddenly of the goyish-turned-Jewish sister-in-law in The Marvelous Mrs. Maisel, Astrid. No one actually cares that she wasn’t born Jewish — she converted before marrying Midge’s brother, Noah — but she drives everyone crazy trying to prove how into it she is.

The thing is, I sort of relate to her. I am wrangling hamantaschen for my son. My husband and I are raising him in California, far from our families, and I want him to have some semblance of tradition and culture. We are not religious, but I do like to cook, so we have latkes on Hanukkah, matzah ball soup on Passover, and hamantaschen on Purim.

Even though I’m not Jewish, I am a Jewish mom. My husband — who is Jewish — and I made a conscious decision to raise our son Jewish. I was raised ambiguously Christian: I was dragged to church by my super-conservative Evangelical grandparents when I was young, then later, with my more generic, community-seeking Presbyterian parents. The result is that I am indifferent or agnostic, depending on the day.

My husband’s family wasn’t particularly religious but was deeply rooted in Judaism and Jewish history. He went to Jewish private school and many of his close friends are Orthodox. His father survived the Holocaust and worked for the Jewish Federation.

Our first Jewish family decision came nine days after Eli was born when it was time for the bris. (My recovery from a c-section delayed things a bit. ) The idea of having a bunch of people over while I could barely walk without pain seemed terrible and I couldn’t believe I agreed to it. I had just spent nearly a week in the hospital, and now I was supposed to put on actual clothes and serve bagels and coffee? We could’ve had his circumcision done in a medical facility while I was still doped up on painkillers.

But my sister-in-law flew in the day before. Incredibly, she washed the dishes, swept the floor, and got up early with the baby so we could sleep in for the first time. My husband’s cousins brought piles of bagels and tubs of cream cheese. Our friends brought wine and coffee in boxes. I started to doubt my doubt about the bris.

Then a wonderful man known as the Cali Mohel came to our house and explained to everyone gathered at our home the purpose of a bris, the roles we all had, and the meanings of the words. My sister-in-law held Eli during his bris, the first woman the mohel had ever had do that honor. We felt very modern, very California, and entrenched in our tribe.

As he finished, the mohel gave Eli a piece of gauze to suck on, purple with Manischewitz wine from a tiny travel-sized bottle. For the first time since he was born, he fell asleep in someone’s arms beside my own. I sat down and ate bagels and drank coffee.

The entire experience was surprisingly magical.

We do our best to keep making these Jewish choices. I cook what Jewish foods I can. Eli calls his paternal grandma Bubbe, even though her other grandkids don’t, because we thought he needed a bubbe. He calls his yarmulke his “candle hat” because he only wears it to light the menorah during Hanukkah. We found a local temple that hosts monthly music classes for toddlers, introducing them to songs and traditions like Havdalah, without insisting that we actually become dues-paying members of the congregation.

Last year, for Passover, we had hoped to fly to the East Coast to be with my husband’s family. That didn’t pan out. We often drive two hours to spend Jewish holidays with his cousins instead, but that didn’t work out either. We wound up having a tiny seder in our cramped San Francisco apartment, with a precooked chicken from the grocery store. We were happy our niece was able to be there, but we still hurried through our Haggadahs to get to the food and wine and be done with it.

But then, when it was time to hunt for the afikomen, I realized it was the first time we actually had a kid to play along. Eli was just old enough to get the idea of hide and seek. It turns out that creeping around the living room with his Dad to find a piece of matzah hidden in the bookshelf is the height of hilarity to a toddler. For days afterward he would hold up the Hotwheels car he got as a reward and declared triumphantly, “For finding the AFKEEKOMEN!”

Someday, we will have to explain to him why we celebrate Christmas and Hanukkah, and how both are culturally valid. We will also send him to Hebrew school, and as a family we have to decide how much time and money to dedicate towards that. We will help him decide if he wants a bar mitzvah. We will take a trip to Israel, and he will have to decide what that means to him, both politically and culturally. Most of these hold true for any modern Jewish child, but he will have to contend with more ambiguity. Maybe that will make things more difficult, maybe easier.

So as I gear up to make hamantaschen ahead of Purim this year, I will try to remember that the story is more important than the shape. On Passover, I’ll try to remember that this night is different from all other nights for many reasons, none of them having to do with cooked-from-scratch brisket that never manifests. On Hanukkah, we will remember that even though our son won’t spend it with his family, we have a new tradition of inviting our friends — those same friends who attended his bris — over for a joint holiday celebration that includes both latkes and Christmas cookies. And the fact that he thinks both are things to be celebrated is exactly how we want it to be.