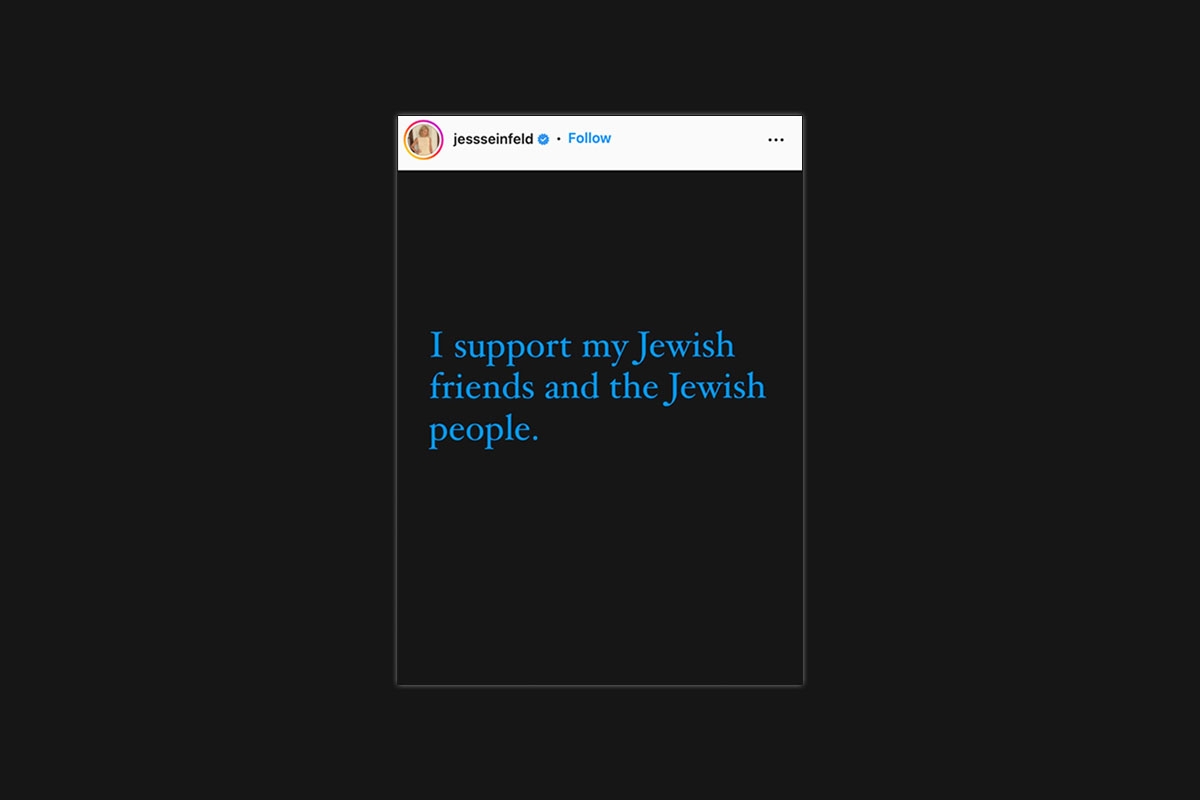 As American Jews, we often feel that when it comes to antisemitism, our fellow Americans have other priorities.

Even when antisemitic incidents happen in this country — from synagogue shootings to politicians spouting off about Jewish space lasers — it’s rare to see a widespread public outcry of manifestations of the same hatred that has plagued us as a people for centuries.

But Kanye West’s recent antisemitic tirades, including a tweet in which he threatened to “go death con 3 on Jewish people,” seem to have been the straw that broke the camel’s back — at least for Jewish celebrities, who are now calling out to their fellow celebrities and fellow Americans to speak out.

Helming that effort are a lot of admirable Jewish women — including Jamie Lee Curtis, who last week shared a plea on “The Today Show” for people to speak out against Ye’s antisemitism, Amy Schumer, Rachel Bloom and Jessica Seinfeld.

Seinfeld, a cookbook author and the wife of comedian Jerry Seinfeld, is urging others to share a black square on their Instagram accounts that says, “I support my Jewish friends and the Jewish people.”

If you don’t know what to say, you can just say this in your feed,” Seinfeld, who is a mother of three Jewish children, wrote.

The black square is reminiscent of the BLM black squares many posted on Instagram back in 2020 — which many others criticized as being performative — but in this case, the ask comes from a Jewish celebrity and is doing quite a good job at raising awareness.

Debra Messing shared Seinfeld’s graphic, writing in her Instagram story that “there are 15 million Jews in the entire world. Kanye has 18.3 million followers just on Instagram. There’s a reason we’re scared.”

The post has been shared by quite a few celebrities, including West’s former sister-in-law, Khloe Kardashian. West’s ex-wife, Kim Kardashian, also disavowed antisemitism on Twitter today:

Hate speech is never OK or excusable. I stand together with the Jewish community and call on the terrible violence and hateful rhetoric towards them to come to an immediate end.

Kanye’s statements energized antisemitic fringe organizations like the Goyim Defense League, who wove an antisemitic banner over the  405 freeway in Los Angeles. “Honk if you know Kanye West is right about the the Jews,” it read.

Antisemitic fliers were also circulated in neighborhoods across Los Angeles. Actor Josh Gad shared the fliers on social media, decrying the evil “in this world. And specifically in this country.”

Fucking evil. There is truly such evil in this world. And specifically in this country. https://t.co/AQxHBz2wLs

Meanwhile, in an interview last week, Kanye talked about his partnership with the brand Adidas, bragging that he “could say antisemitic things and Adidas cant’ drop me — now what?”

Adidas has literal Nazi history. The founder of the brand, Adolf “Adi” Dassler, joined the Nazi party in 1933 and was a coach and provider for Hitler Youth programs. He went through a Denazification Panel after the war.

The ADL are now calling on the brand to drop West — but so far their efforts have been unsuccessful. Seinfeld also shared a Change.org petition that urges the sportswear brand to drop the rapper, which now has over 80,000 signatures.

Other celebrities are also asking Adidas to drop West, including Josh Gad who tweeted, “Hey @adidas , is this right? Can he single out a single faith and group of people with hatred and vitriol and it doesn’t matter? Asking for a friend.” Jewish actress Kat Dennings tweeted that “the world is watching,” tagging the brand.

The world is watching, @adidas

Amy Schumer shared Seinfeld’s graphic on Instagram with the caption, “Do you know what the Jewish community is afraid this will lead to? 1 in 2 people don’t know the holocaust happened. Stand up. #neveragain.”

“Interesting this @adidas ad starts with a pile of shoes,” Schumer wrote in her stories. “Know where else there were piles of shoes? At the concentration camps.”

Adidas has not made any public statements disavowing the performer as of yet, though they have said the partnership is “in review.” It’s not the only brand that needs to cut ties with West — I was honestly shocked to get an e-mail from Gap this weekend advertising a Yeezy hoodie, and I know I’m not the only one. Balenciaga has dropped its collaboration with the rapper, as has Vogue.

Some Jewish celebrities have urged Jews and non-Jews alike to question their reluctance to speak out or be allies: “If you hesitate to support the Jewish community, or you are Jewish and feel fear or guilt about standing up for the Jewish community,” actress Rachel Bloom wrote in an Instagram story, “I invite you to look inward and ask yourself why this might be the case.”

“Perhaps deep down, we all think a little bit that well, the Jews don’t have it so bad,” actor Adam Goldberg wrote on Instagram, “and you know they really do kind of control everything, they’ve got that state over there that we want to divest from etc etc…but it seems like if we were running the show we’d be a lot better at controlling this particular problem.”

The truth is that we’ve seen how dangerous antisemitic hate is. This week will mark the fourth anniversary of the Tree of Life synagogue shooting in Pittsburgh, the deadliest antisemitic mass shooting in the history of this country. Yet as Goldberg, a Jewish dad of three, wrote on his Instagram post, despite constantly facing antisemitism as a public Jewish figure, the response he often gets when he tells people about antisemitic incidents is shock and disbelief.

“One of the reasons I think you’re all so stunned is that we don’t seem to have a lot of (vocal) allies in this fight,” Goldberg wrote. “You don’t see a lot of this stuff on the grid, it may pop up in stories here and there. But this fight should be no different than the others.”

Comedian Judy Gold reminded her followers that Jews are a part of this country, tweeting that her father was a World War II veteran. “I am as American as you are,” she wrote, urging others to speak out against antisemitism.

Jewish actress and comedian Isla Fisher shared in her Instagram story that despite being a lifelong fan of his music, she’s “so disappointed to watch [Kanye] take his long worked for platform and use it to perpetuate hate,” sharing an image of the antisemitic banner over the LA highway that is “right outside our door” and “scary as hell.”

“It’s not the actions of a few,” Fisher, a mother of four Jewish kids and the wife of Sasha Baron Cohen, wrote. “It’s the silence of too many that allows this hating to persevere. Please stand up against hate and #antisemtism.”

It is heartening to see these Jewish celebrities having a meaningful and public discussion of what it means to be Jewish nowadays and the fears we all live with as vitriolic antisemitic speech and incidents seem to surround us — and to have them raise awareness to the fact that yes, in 2022, antisemitism is still a problem. And if it means that more non-Jewish celebrities will speak out about it as well, all the better.

Anti-semitism in any form is deplorable. In person. Online. Doesn't matter where. It's hate and it's unacceptable.