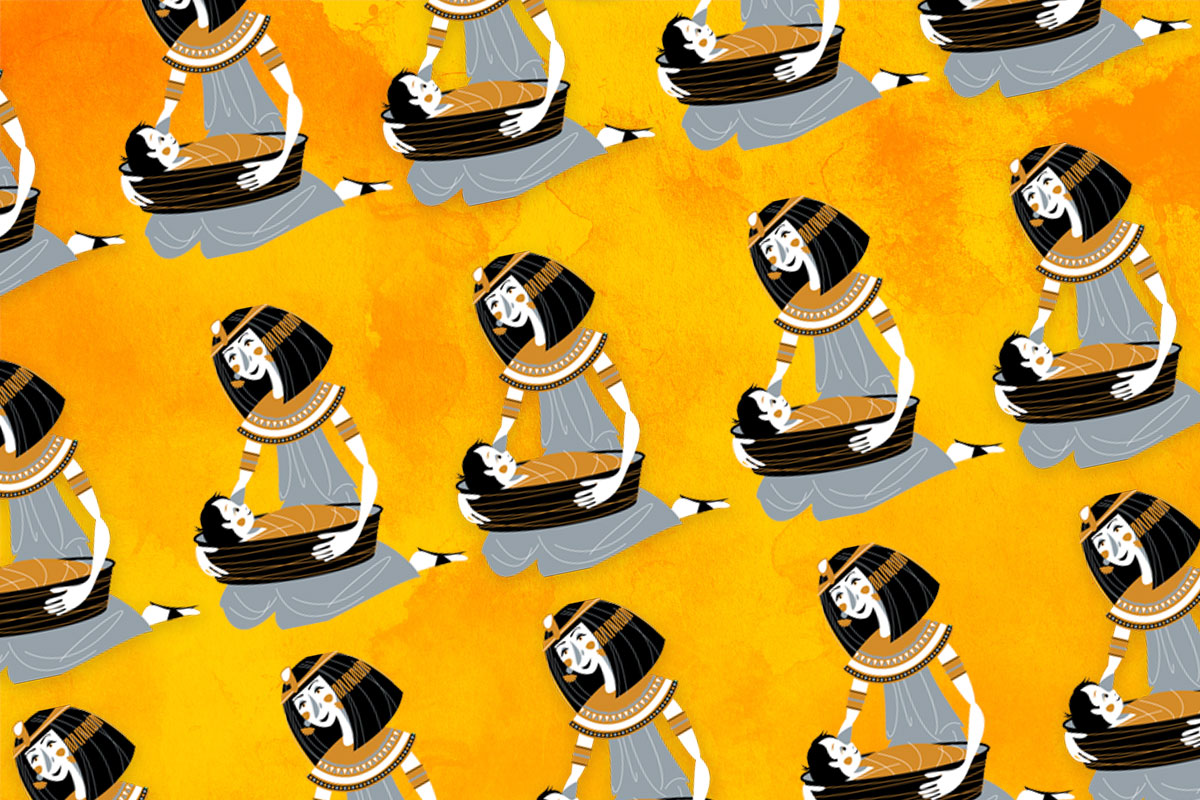 Every year, we celebrate the same themes of Passover: freedom, redemption, Moses leading the Jewish people out of Egypt at God’s command. There’s a little nod to Miriam, Moses’ big sis (especially if you, like me, enjoy playing Debbie Friedman’s “Miriam’s Song” at your seder).

But do you know who is overlooked almost completely, save for being a mere byline in the story? Batya, aka Moses’ adoptive single mother. It seems the only reason we ever even mention her is because we need to name the warm body attached to the hands that pulled baby Moses out of the river. She’s basically a simple plot device in the Moses narrative, because, after all, he’s the important one in the story, right? But I’m calling bullshit this year, because women and caregivers aren’t just a byline in someone else’s story; we’re the ones who allow for the story to happen.

In the Passover story, Moses is born in ancient Egypt during a time that’s not exactly ideal for the Jewish people: Pharaoh has just decreed that all Jewish infant boys are to be drowned in the Nile, as a form of population control for the Jewish slave population that is growing too large for Pharaoh’s comfort. Moses’ mother, Yocheved, attempts to save her third-born by setting him afloat in a basket in the Nile. His older sister, Miriam, follows along the river bank, keeping an eye on her baby brother. Fortuitously, the basket floats over to where the Pharaoh’s daughter, Batya, is bathing in the river. She saves baby Moses, taking him in as her own and raising this savior of the Jewish people in the very palace of their oppressor. Miriam appears to conveniently offer to find a wet maid for Batya’s foundling infant, and brings back their mother, Yocheved. Batya pays Moses’ biological mother to breastfeed her own baby for two years while he is safely growing up in the palace.

According to Jewish Midrashic sources, Batya was actually in the ritual process of Jewish conversion, using the Nile as a natural mikvah, when she found baby Moses. “Batya” is a Hebrew name that means “daughter of God,” and Midrash relays that God gave her this name as a way to honor her for her part in the Passover story.

So why is this woman so integral to the story retell each year at our seders so rarely mentioned or celebrated?

Words can’t express the personal meaning it brings me to raise my child, and the love I have for him, the willingness and desire to be his nurturing caregiver. However, I’ve seen and heard messaging (that’s been explicitly said to me in as many words) that our greatest contribution to the world — the thing that makes us matter — is our children. Because of this, it’s vital to remember that we have identities outside of our caregiver roles. Batya, for example, had a whole narrative of her own: Can you imagine if we looked at the story of Passover through her eyes?

Maybe we’d start with a little background of what it was like to grow up in the palace with a cruel tyrant for a father, and how she always had something of a rebellious streak (she did end up converting and adopting a foundling baby as a single mother, after all!). We’d see her as a young woman, having developed a respect for and interest in the people her father persecuted, learning more and more until she’s consumed by a desire to become one of them. Perhaps, a step further, she is spurred to officially convert as a show of solidarity, in response to her father’s decree to slaughter all the Jewish boy infants.

Was Batya nervous of what people would say about her for raising the baby, or of how her father would react? Or could she care less, because she was the kind of badass Egyptian princess who converted to Judaism right under her father’s nose? We’d wonder if she really didn’t have a clue that Moses wasn’t Jewish, or if rather she played along in order to save one of her chosen people and assist his own mother (whom she hired as a nurse maid for Moses). Was she really some clueless, faceless princess or was she a subtle, loyal ally who was helping her people from within?

We could visualize what it might have been like when Moses fled and lived in hiding after killing an Egyptian slave master; can you imagine what that must have felt like for her as his mother? Or when he came back married, ready to take the next step forward to help their people, from the revolution she had quietly started within the very palace walls?

I could go on, but you get the idea. We have told the Passover story so many, many times, but most of us have ignored this quiet heroine who’s been under our noses all along — just as we often focus so much on the perspectives of those we care for that we sometimes forget to prioritize our own.

My desire to focus on Batya at the seder this year is not only because she’s an iconic woman from Torah, or even because she was a single mom with an interfaith family (like me); it’s because it’s important for us to feel represented. If, like Batya, we’ve been pushed to the margins — or even purposefully stepped back into them ourselves to allow someone else the spotlight — then perhaps celebrating her will remind us that even with all our hard work and sacrifice, our narrative matters, too. In fact, if it weren’t for Batya, the entire Passover story would have unfolded completely differently, quite likely with a different hero! And since the Exodus has a domino effect on all the stories that come after it, our Biblical history as we know it would be different — all because of one woman, whose name many of us probably forget or never learned.

The Passover theme this year will still be freedom; but in this case, the freedom that comes from caring for others while also remembering to care for yourself because you matter. The theme will still be redemption; but in this case, it’s the redemption and progress that’s only possible thanks to the caregivers who did the behind-the-scenes work so that those in the spotlight could shine. The theme will still be about a leader leading the Jewish people to freedom; but in this case, I’ll be looking at Moses’ adoptive mother, who was the catalyst for this salvation long before he could even walk. It’s time to take back the narrative and finally show Batya the true honor she deserves. By doing this, I hope it can serve as a reminder that we are never just the byline in someone else’s story — and we just might be the hero who helped make their story possible.