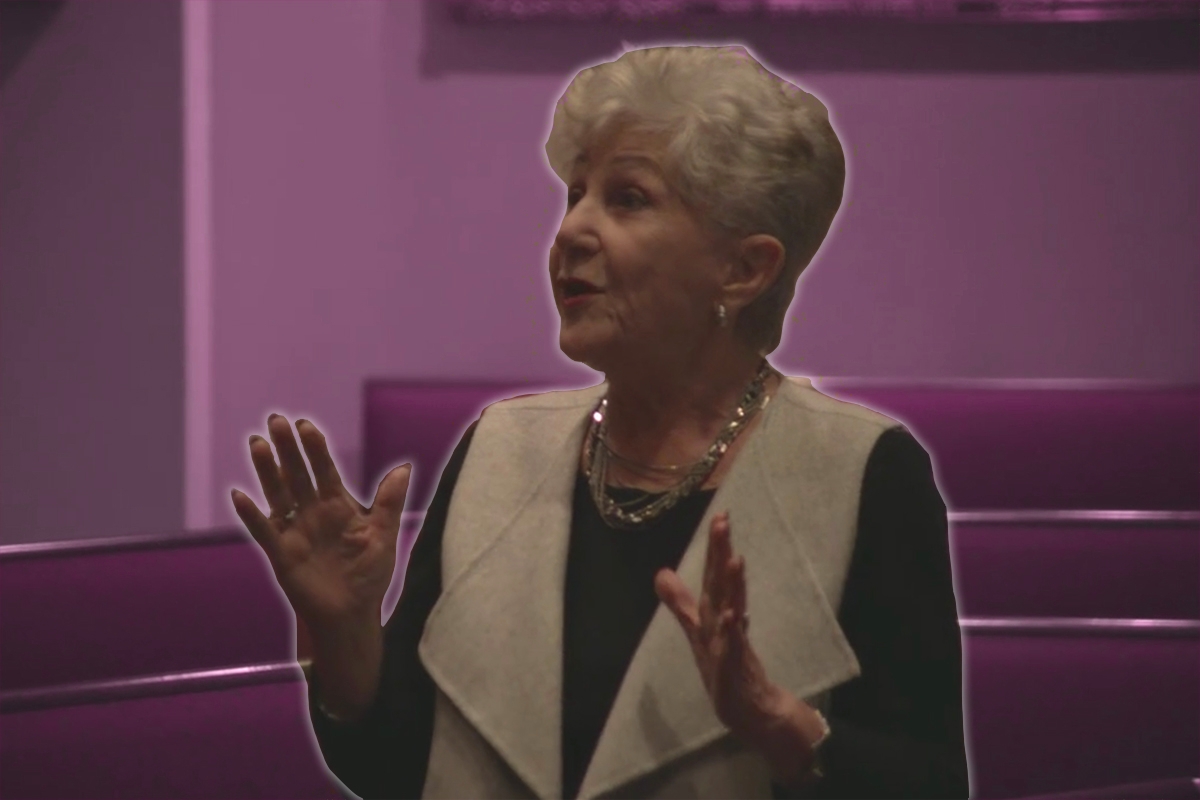 Borat Subsequent Moviefilm, the unexpected sequel to the shocking and wildly successful 2006 Borat movie, is making headlines for its outrageous scenes — including a particularly notorious one featuring Rudy Giuliani in a hotel room.

But there are some genuinely touching moments in the film — in which Jewish dad Sacha Baron Cohen reprises his role as a clueless journalist from Kazakhstan — mostly involving the women in the movie. There’s Borat’s daughter Tutar, flawlessly played by Maria Bakalova, who brings some much-needed feminism and emotion to the franchise. There’s the brilliant Jeanise Jones, Tutar’s babysitter, who teaches her to stand up for herself through unforgettable, impassioned speeches.

But one scene featuring a Holocaust survivor, Judith Dim Evans, might be the most powerful in the entire film.

It opens with Borat, dressed as “a Jew” — actually, a truly awful, antisemitic costume, including a huge prosthetic nose and bag of money — enters Temple Kol Emeth in Marietta, Georgia. He’s there because he’s in the depths of despair, having just been told the Holocaust was a hoax. And so, on a suicide mission, he decides to go to a synagogue in order to wait for an antisemitic terrorist attack.

Yes, the setup is extremely dark. But once inside, Borat meets Evans, who greets him warmly. She hugs him and invites him to touch her own “Jewish nose.” She listens to his story and then shares her own — the story of surviving the Holocaust as a child in Germany, reifying that, yes, the Holocaust did truly happen.

The scene is framed as a poignant rebuke to Holocaust deniers, and it’s a touching moment of humanity and kindness  — despite the age-old ignorance and hate that Borat and his costume evokes. Evans emerges as one of the standout characters of the movie.

If you watched the scene and thought, Wow, here’s an exemplary educator and a remarkable woman — you would be right. After surviving the Holocaust and getting her education in Israel and joining the Haganah, Israel’s pre-state army, she became a pioneering Israeli educator. She founded the first middle school in Israel and was the youngest school principal in the country.

Yet, according to her family, Evans, who passed away this June at age 87, would never have agreed to participate had she known the true nature of the movie.

Evans’ daughter, Michelle Dim St. Pierre, tells Kveller in a phone conversation that while her family cares deeply about fighting Holocaust denial, her mother would’ve never agreed to be in a movie that mixes the Holocaust with humor. St. Pierre explains that her mother was sure she was going to the temple that day to film a documentary. She was apparently shaken to see Baron Cohen in the costume — but the crew convinced her to continue, explaining that the man in the antisemitic costume was Jewish, and this was all part of the documentary.

According to St. Pierre, on the drive home after the shoot, Evans called her to say she felt like she had been duped.

After Evans’ death, St. Pierre discovered that the project her mother participated in was the Borat movie. She sued Amazon and the production team for interviewing Evans “under false pretenses with the intent of appropriating her likeness.” St. Pierre claimed that her mother “is a person that would never be participating in this and would never play the game if she would know what it was about.” The lawsuit was dismissed by a Georgia court earlier this week — but St. Pierre says she plans continue with litigation.

“Sacha Baron Cohen was deeply grateful for the opportunity to work with Judith Dim Evans, whose compassion and courage as a Holocaust survivor has touched the hearts of millions of people who have seen the film,” an Amazon rep said in a statement about the lawsuit. “Judith’s life is a powerful rebuke to those who deny the Holocaust, and with this film and his activism, Sacha Baron Cohen will continue his advocacy to combat Holocaust denial around the world.”

Baron Cohen took some unprecedented steps in order to honor Evans. He dedicated the film to her, something he had never done before, and his team helped build a website telling her story. According to Deadline, he is also working with Amazon to release more of her testimony about her experience during the Holocaust.

Evans’ story is truly amazing. She was born on August 25, 1932, in Beuthen, a German town located at the Polish border, where Jews have lived since the Middle Ages. Evans wasn’t raised particularly Jewish; her mother, who raised her and her younger brother as a single mom, was free-spirited and assimilated and felt more German than Jewish. But her grandmother, who helped raise them, practiced Judaism devoutly — she kept Shabbat and celebrated Jewish holidays.

When the Nazis rose to power, Jewish life in Beuthen quickly changed. On Kristallnacht, the Beuthen synagogue was burned. Evans witnessed the destruction: “I remember holding my Mother’s hand. I can feel her hand here today,” she recounted in a talk she gave in January at the University of South Carolina Aiken. “She squeezed my hand and looked down at me and said, ‘Don’t worry. Nothing will happen to us. We are Germans.’ And this is what she believed. I can still smell the smoke and the shouting, ‘Dirty Jew. Death to the Jews.'”

Evans also recalled her mother and grandmother sewing yellow stars on their clothes and being shunned by her classmates. When she was 8, her mother was arrested, and taken to Ravensbrück concentration camp, where she died. Evans heard of her mother’s arrest and tried desperately to say goodbye to her: “In front of the police station were young women with the Magen David,” she said. “My mother was sitting on one side. I was running and shouting, ‘Mookie, Mookie.’ She stretched her hand out. I was trying to touch her hand. I can still feel it and see it today. I couldn’t reach her. I never saw her again.”

Then, her grandmother was taken away. “They took her to the Jewish cemetery where they built barracks for old Jewish women to let them die there,” she said.

Neighbors took Evans and her brother to an orphanage, where nuns took them in and kept them safe for the duration of war. “They took the yellow Magen Davids off our clothes and told us to tell them our father was in the war and our mother passed away and we had no place to stay,” Evans said.

She left the nuns and, through the help of a beneficiary named Sarah Stern, got a rare visa that allowed her to immigrate to Palestine. Evans was just 14 when arrived in pre-State Israel, an orphan. She went to a boarding school in Jerusalem, completed her education, and joined the Haganah, where she helped fight for Israel’s liberation.

It was while she was running a refugee camp for Yemenite immigrants that she met her husband, Chaim Dim, a military officer. They married and had two kids, and settled in Ramat Hasharon, in central Israel. Dim, who became Ariel Sharon’s head of staff during the Six-Day War — was awarded the rank of colonel after the war.  Dim died in 1967, shortly after the war, leaving Evans a military widow.

Evans spent most of her life as a lauded educator. “We all have a traumatic experience. What do I do with it?” she told Aiken Woman magazine in 2013. “For me, I became a teacher. It was very important to educate and to teach children to think… to be responsible.” Her curriculum was progressive and pluralistic and didn’t center on grades. Evans helped found and run two legendary schools in Ramat Hasharon, including the first middle school in the country, Alumimm.

In the 1980s, while working in Belgium at a school for the children of diplomats, she met her second husband, Tom Evans. The two got married in 1988. “I never thought I would marry again, but he was stubborn,” she once joked. The couple settled in Aiken, South Carolina, where Evans taught classes at USC Aiken, helped children study for their bar and bat mitzvahs, and finally joined a synagogue. “I never went to the synagogue in Israel,” she said of her congregation, Adath Yeshurun. “I came and I immediately felt like a family.”

Through it all, Evans persisted in telling her story of survival to students. “I feel obligated to be a good person and to bring good to the world,” she said. “We owe the dead.”

Evans was buried in Ramat Hasharon, Israel where she raised her two children, and despite Covid-19, 250 people were allowed to attend the funeral. Evans she left behind two children, three grandchildren, and an incredible legacy for us all — one that reminds us to never forget the past, to speak up for what’s right, and to always be good to each other. May her memory be, always, for a blessing.