My Granddaughter and I Had Our Bat Mitzvahs Together on Zoom 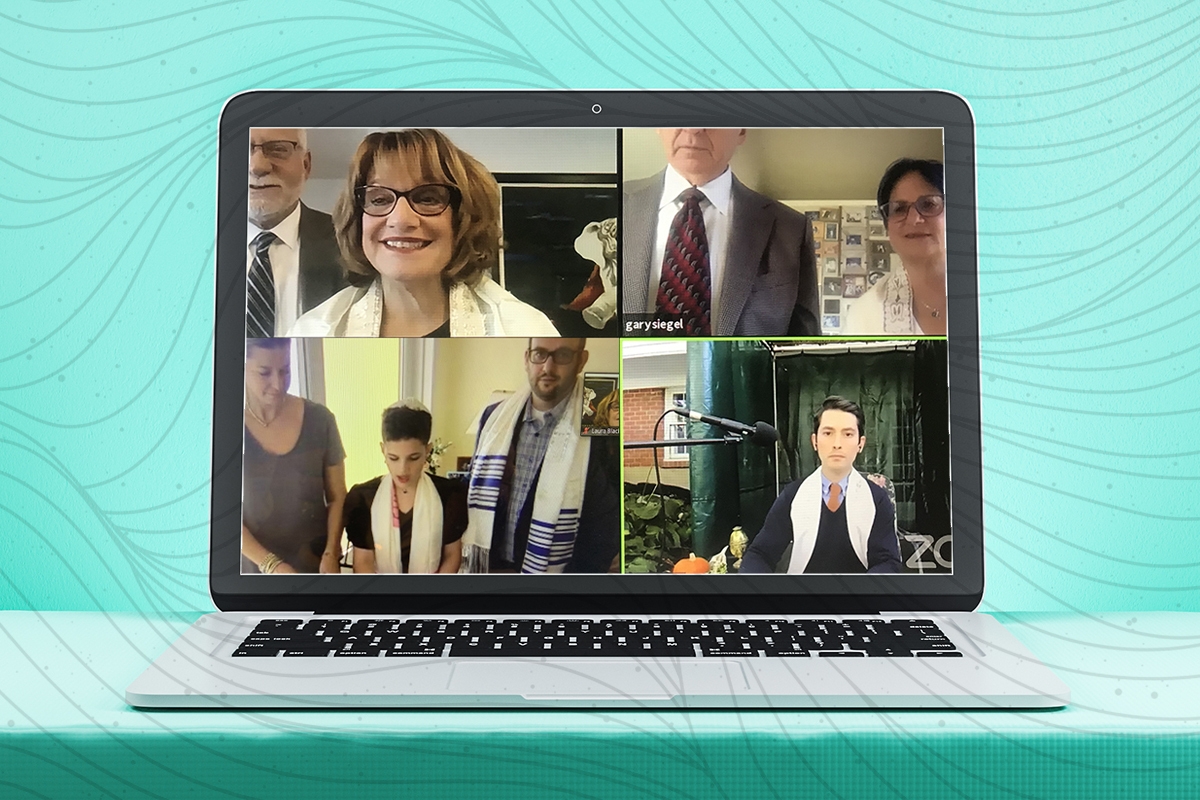 Two years ago, my granddaughter, Addie, percolating with excitement, called to tell me that she had received her bat mitzvah date. My mind flashed to a memory of her wearing a purple tutu and playing princess. Where had the time gone? I wondered.

Her next request caught me off guard. “Dad told me that you’ve never been bat mitzvahed. Is that true?” she said. “If it is, let’s get bat mitzvahed together!”

It was true. When I was Addie’s age, in the mid-1960s, bar mitzvahs for boys were commonplace but bat mitzvahs for girls were just gaining traction. My parents encouraged me to pursue my Jewish education, but they did not insist on it — so therefore I passed on Hebrew school.

My mother and father had a laissez-faire relationship with Judaism. The traditions, history, and identification were important to them: they hid the afikomen at Passover, schlepped us to High Holiday services, and hung a mezuzah on the frame of our front door. But they did not light Shabbat candles, keep kosher, or rely on their faith for comfort and security

In stark contrast was my paternal grandfather, who was Orthodox. A kind, gentle, yet powerful man, Judaism was his backbone. It kept him upright, steady, and confident that God was watching over him and his family. Through the years, he became increasingly observant of Jewish laws; of his thrice-daily prayer sessions, my father said, “he’s cramming for finals.”

My grandfather’s commitment to Judaism left a mark on me. I felt a bit of envy — what would it be like to possess such an ironclad belief system? And now, with those old perceptions reignited, my granddaughter was offering me the opportunity to further my religious exploration.

At first, I shrugged her off. “Addie, that is so thoughtful, but it’s your special day,” I said. “Let’s concentrate on you.”

“But it will make my special day even more special if we do it together,” she countered.

And then I remembered, “You know your other grandmother never had a bat mitzvah, either.”

Without skipping a beat, she said, “So it will be us three! And let’s give away socks at the party.”

I remained noncommittal, figuring that, with time, once she stepped into the whirlwind of preparations, her desire for a multiplayer bat mitzvah would subside.

But I was wrong. Addie continued to campaign and I began to seriously consider her request. For one thing, it was never easy for me to deny any of my three grandchildren anything — from “one more time” on the merry-go-round when they were toddlers to weekends at the beach as they got older, I easily gave in. For another, I was curious to see how this process might enrich my life. And maybe I could set an example of the importance of Judaism for Addie, like my grandfather had done for me.

And so, over the last two years, along with my daughter-in-law’s mother, Judy, I attended bi-weekly lessons with the patient teachers at our synagogue in Baltimore. We began at the very beginning: I learned Hebrew letters with flashcards, and how to differentiate a daled from a vav, which are very similar looking at first glance. I mastered the traditional blessings. And I listened, hundreds of times, to my cantor’s melodic voice on my iPhone and memorized, albeit off key, my Torah portion.

As the months passed, our newly formed triumvirate engaged in summit-level discussions delineating the details of our big day. As per Addie, we agreed to wear coordinating outfits, but nothing “matchy matchy.” We planned a Kiddush lunch for after the service, adding family favorites like nova and whitefish to the pre-fixed menu. We booked one of those places with disco lights and video games for a kid’s party that night. The grandparents would bring their own alcohol and hang out in a side room

As October 2020 drew nearer and my confidence grew, what started out as a concession to Addie stirred up a hunger for a deeper understanding of and connection to Judaism. I absorbed the meaning behind the blessings. I saw myself standing on the bima (stage), leaning over the Torah, pointer in hand, chanting to a sanctuary brimming with friends, family, and loving memories of my parents and grandparents.

But then came Covid-19. Like so much of our lives, our Hebrew lessons pivoted to Zoom. As infection rates skyrocketed, I reviewed cancellations clauses in our contracts and steeled myself for how things would play out.

As spring turned to summer, my daughter-in-law got the call: all in-person events at the synagogue were cancelled. We were relegated to a virtual bat mitzvah. I was devastated for Addie; disappointed for myself. How would I find what I was searching for, what my grandfather experienced, chanting to a laptop at my kitchen counter?

Following the advice of the CDC, we couldn’t even be together under one roof. Judy would become a bat mitzvah from her house in the country; me, from mine in the city. To compensate for Addie’s disappointment, her parents took her to our condo at the beach. They would finagle their laptop at just the right angle so that the midnight-blue ocean formed a backdrop for her prayers.

The morning of our big day, I washed and blow dried my hair, put on make-up, added a necklace and earrings. It wouldn’t matter what outfit I wore; the camera would only capture me from the waist up. As I scoured my drawers for a handkerchief to cover my head, I stumbled upon a purple velvet drawstring satchel which had belonged to my father. It was a wedding present from his grandparents that held his tallit (prayer shawl) and kippah. I decided to forgo the handkerchief, and I bobby-pinned the kippah and wrapped the tallit around my shoulders.

As the 10 a.m. start time approached, my husband stood by my side and the familiar, welcoming faces of our clergy lit up the screen. With our laptop in gallery mode, I saw Judy holding hands with her husband in a square on the left. In the top right, my son and daughter-in-law; their faces, aglow with delight, waiting to witness their daughter’s rite-of passage, brought tears to my eyes.

The music began and the clergy welcomed us to a different but still sacred service. Addie surpassed all of our expectations, chanting her prayers and Torah portion with a pure, angelic voice. Then it was up to me. I took the ends of the tallit and pulled them together, tight enough to feel my father’s hand on one shoulder, my grandfather’s on the other. I caught Addie watching me with an, “I told you this was a good idea” smile.

As I began the blessing, I was transported. The combination of seeing my granddaughter’s metamorphosis into a woman — and then myself, in my 60s — offering those ancient blessings, elevated me to higher grounds. I felt like I did when I visited Jerusalem for the first time and pressed my palm to the Western Wall; I felt a connection to something so ancient and yet so present. Remnants of self-consciousness evaporated as I succumbed to a higher presence, who whispered: “Trust me. All is good. You are safe.”

Although I will not practice my Judaism in the same way as my grandfather — I do not plan to become observant—  I will continue to search for spirituality. It brings me peace, contentment, and takes me to a place outside of myself, puts me in touch with something I cannot name. This transcendence can appear at any moment and in anyplace — even on the screen of a laptop.