I Was Fruitful. I Multiplied. And Then I Got My College Degree at 54. – Kveller
Skip to Content Skip to Footer

I Was Fruitful. I Multiplied. And Then I Got My College Degree at 54. 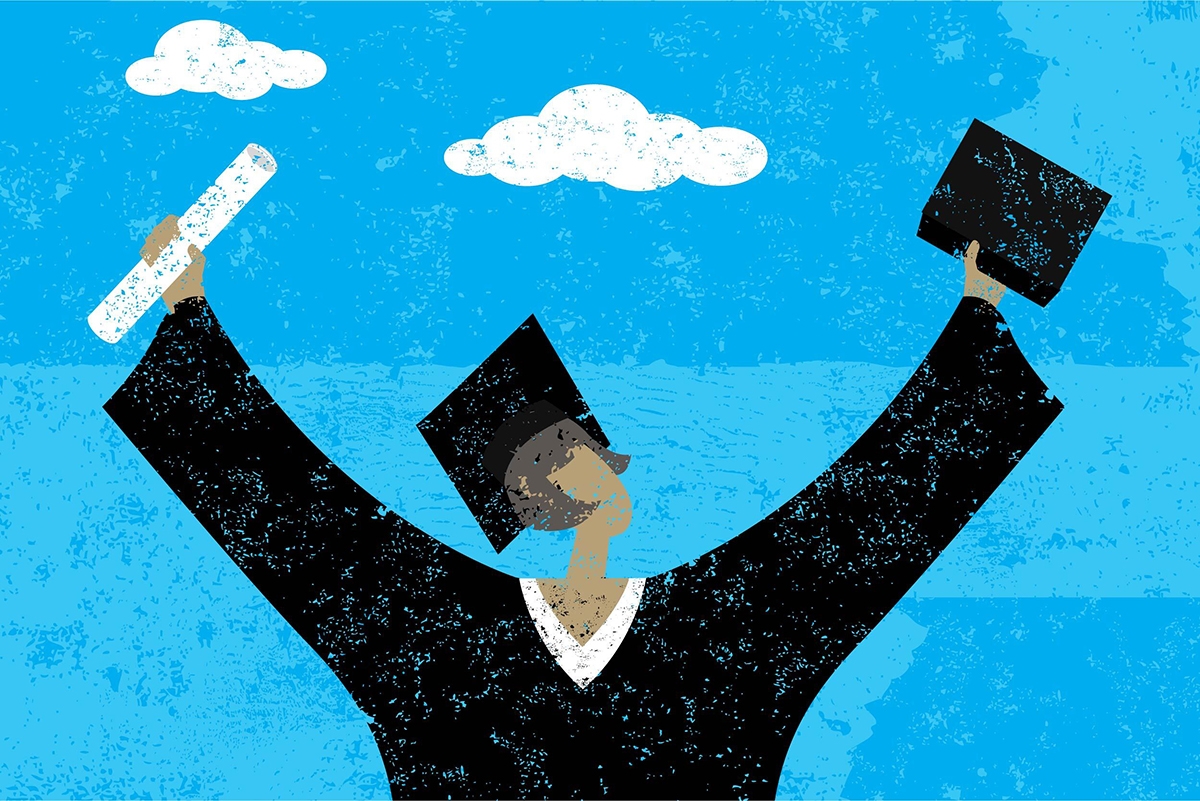 My granddaughter started college this year and because of the pandemic her campus is closed. She’s going it solo in front of a screen in her home, her first experience of higher learning so much different than mine when I went to college.

If you’re thinking that my parents drove me up to school, helped me unpack my stuff and set up my dorm room, and then helped foot the bills, you would be wrong. Because none of that happened.

In the Jewish home where I was raised, it was more important that I marry a doctor or a lawyer than become one. So when I graduated from high school in 1955, I opted for a “MRS” instead of a BS degree.

I was 20 when I got married, my husband, 23. (We met in high school and were married for almost 60 years when he died six years ago.)  I was eager to start a family — after all, being fruitful and multiplying is something revered in Jewish life. I had three children within five years and they were my sole focus.

As my kids got older and more independent, however, I looked for other areas in which to put my energies. Creatively bent, I enrolled in interior design school and eventually started my own business. I had a good marriage, wonderful children, work I enjoyed. What more was there? Answer: A nudgy feeling whenever folks talked about college. I knew I was smart, but I realized that I wanted something that was also embedded in Jewish belief, something that goes back to the study of Torah: I wanted an education.

And so, at 46, my three children all with college degrees, I enrolled as an ACE student (Adult Collegiate Education) at Queens College in NYC. An accelerated bachelor’s degree program for high school graduates 25 and older, the program was designed for motivated adults to get a BA in four years or less.

It wasn’t only the program that was accelerated: I was. I was so excited to be a college student that I couldn’t wait for the fall semester — I started taking classes that summer. I must have wanted that education more than I knew.

When I was in high school, English was the only class that interested me. I excelled in it, and I actually looked forward to writing book reports and compositions. But school in general was just a place I had to be. College, however, felt different. From the moment I set foot on that Queens College campus, I was in love. The book store, the cafeteria, even going on line — and, FYI, “on line” back then was not online. You actually stood in the gym with hundreds of other students in order to sign up for classes. But all of this had a magical quality for me.

I became the neighborhood spokeswoman (pest?) for higher learning. When I met someone on the street, I’d gush and rave about my courses. “I’m going to college,” I’d tell acquaintances whom I knew didn’t have a degree. “You should go!”

It got so they waved from a distance. Here comes Rita. Hi and bye.

It was a no-brainer that I would major in English Lit. I studied Virginia Woolf and T.S. Eliot, two heavyweights during the birth of literary modernism. It was fascinating to discuss not only their work but to put them in the context of the times they lived. I was learning how to think in a way I hadn’t thought before.

But it was one class, and one professor in particular, who made a lasting impression.  A tall, sturdy woman with an accent I would later learn was German, and a good 15 years older than I, she came to class each week with her hair still damp from her morning shower, in what looked like a house dress, and always a little out of breath. Thrown together comes to mind. But once she got down to business and laid out the piece we were studying, once she began to discuss its structure and qualities, the subtleties and nuances of the language within, she was as confident and poised as a debutante at her coming out ball. Don’t judge a book by its cover? OK, so it’s cliché! But her misleading appearance wasn’t the biggest thing that struck me.

It turns out that this professor had been an ACE student like me! She had gone on to complete a masters, then a doctorate, and then became an English professor! And she was Jewish! She had fled from the Nazis and, later, the Soviets to come to America to pursue an education. She inspired me to put everything I had into my studies.

The hours I spent in classes, the extensive reading and study, the papers I had to turn in, demanded time I was happy to devote. But there were only so many minutes in a day. I had design clients to shop for, presentations to make, a social life that needed attention and arranging. My husband was miffed when he had an eye on Aruba and it didn’t mesh with my school calendar. He married me for better or worse. But nowhere did it say school. Could I make it all work?

Slow and steady was how I did it. I took one or two courses a semester over a period of eight years, and I kept my clients, saw my friends, and got a smile out of my husband. The biggest surprise came when he announced he was going back to school.

Like me, he was also not a great student in high school (sports was his thing). After some business courses at NYU, he opted for a real estate license and devoted himself to building a business and supporting his family. Being a “good provider” was the Jewish tenet held dear in his household, but once he achieved the success he had sought, term papers beckoned. “You think I want to be the only one in the family without a college degree?” I was elated. I had inspired my husband.

College was exciting, life-changing, a kind of birth experience. The beginning of a new way of thinking, of seeing myself. College showed me I could do more and be more than I had ever thought.

My granddaughter is almost the age I was when I got married. She has put education first, as many young Jewish women have, with marriage and, eventually, family, further down the list. Different needs, different times; who is to say what the right sequence is for living Jewishly? But this I do know: If her college experience is as exciting and fulfilling as her grandma’s was, she’ll never want it to end.