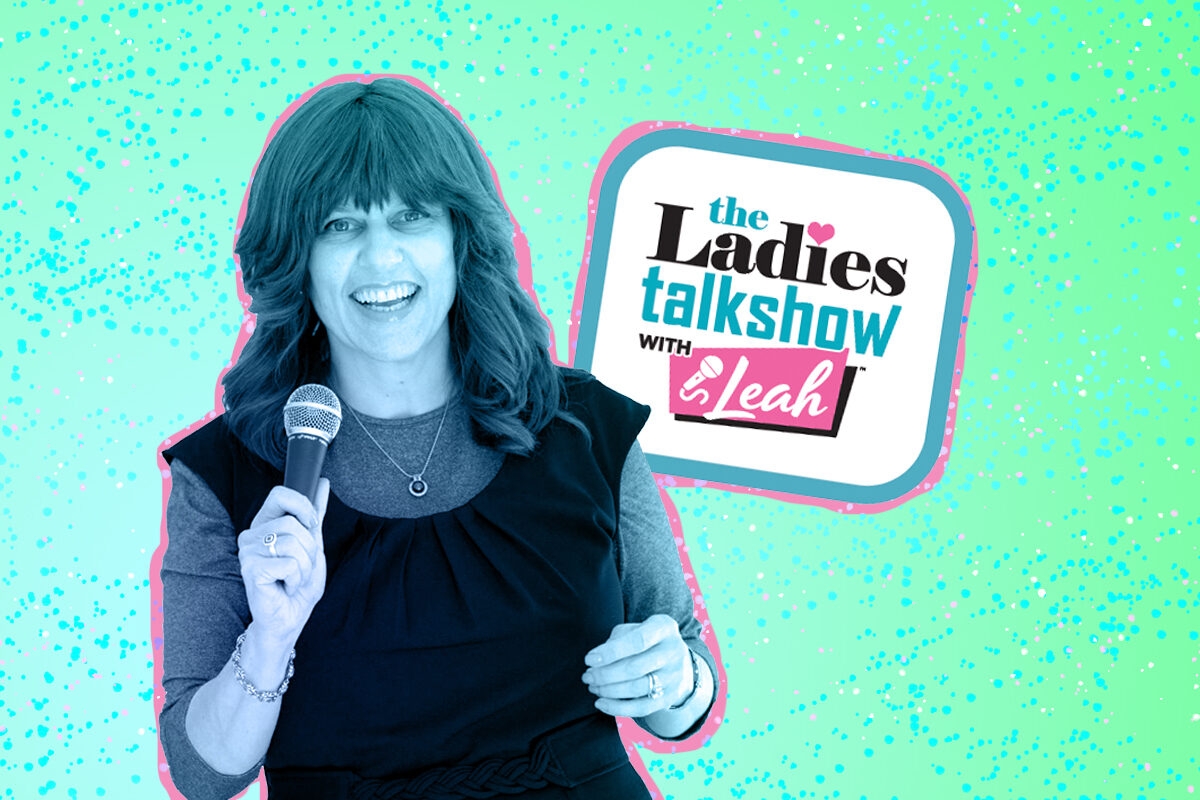 Lockdown isn’t easy on marriage. The stress of being together all day, every day can cause problems in even the strongest relationships. Fortunately there are many ways to seek help — and recently, hundreds of thousands of women from all backgrounds have found strength and inspiration in an unlikely place: a weekly hour-long ultra-Orthodox online program called The Ladies Talk Show with Leah.

“Leah” is Leah Richeimer, a hip, wig-sporting, long sleeve-wearing Orthodox Jewish wife and mom of four in Los Angeles. Her manner is a hybrid of loving warmth and “pull yourself together” briskness; her high-energy demeanor seems more suited to New York’s coffee-fueled culture than laid-back California. She’s like the older, wiser, cooler sister we all secretly long to have.

Since the pandemic began, Richeimer calculates that some 760,000 new listeners — many of whom are not Orthodox, and many not Jewish, either — are turning in to hear her unique brand of Jewish wisdom. While Richeimer says that, since its launch in 2016, the program has had a steady audience of a few thousand each week — the show streams simultaneously on Facebook, Instagram, and the website TorahAnytime — recent weekly episodes have seen approximately 185,000 viewers tuning in each week, she says, and an even larger number of fans downloading episodes as a podcast on iTunes after they air.

What’s behind the uptick? Well, when it comes to marriage, “Everybody has issues,” Richeimer says. (Have truer words ever been spoken? We think not!)

And now, after months cooped up at home, seemingly small irritants between couples are taking on major proportions. “They’re seeing the issues right before their eyes,” she says.

Participating in her online show — watching, commenting, asking questions — is a way for women to share their feelings and validate their experiences, Richeimer explains. “People are looking for camaraderie,” she says.

Still, with its adherence to traditional Orthodox Jewish views of gender roles — in which women are generally expected to be modest, follow the lead of their husbands, and find their greatest fulfillment as wives and mothers — The Ladies Talk Show advice can certainly seem outmoded.

Richeimer, however, insists that her advice, rooted in biblical and Talmudic precepts, has enduring appeal — and its millennia-long track can back that up. “Sure, it’s very old-fashioned — it’s 3,000 years old, that’s as old-fashioned as it can be!” she quips. “But it’s timeless and relevant and fits gorgeously into our modern world.”

Many unlikely listeners agree. “I’m not Orthodox and I consider myself a fairly modern woman who can roll with the best of them,” says a 42-year-old mom of two in Los Angeles, who is a high-profile executive and didn’t want her name used. “Every time I watch the show, I’m not only totally entertained, I come away with applicable tools that I’ve used in my marriage and as a parent.”

Plus, she adds: “Leah is warm, hilarious, open, and loving, and she has a way of thinking creatively about old ideas, making them seem new.”

On a recent program, Richeimer addressed her audience like this: “Is the corona making the conflicts in your marriage crazy — completely crazy?” Listeners quickly flooded her inbox and chat platforms with stories — often painful ones — from their own lives. One woman complained that, now that her husband is working at home, “He is micromanaging me — telling me how to discipline the kids and even commenting on how I wash the dishes!”

After hearing such complaints about life under lockdown, Richeimer offered some surprising advice: step back and let husbands take charge in some areas. “If you let your husband have control, all of a sudden you will see a shift in him, and he’ll be asking, ‘How do you think we should do this?’” Richeimer says. “He wants your influence, but only if you don’t force it upon him.”

This advice, she said, is grounded in Genesis 2:18: “The Torah says a woman is to be a helpmate to her husband — he needs her women’s intuition to succeed in the world,” she says.

Still, when asked if there are times when a woman should be able to take control within her marriage, Richeimer replies affirmatively, stressing that women need to be in control of their own spheres of influence, their own activities. What this looks like can change from marriage to marriage. If one partner in a relationship likes to cook, for example, Richeimer says to let him or her — don’t get involved, don’t criticize, and, above all, don’t micromanage.

Allowing our spouses to take the lead in some areas of marriage is crucial to “shalom bayit,” a Jewish tenet that means “peace in the home” — and that, Richeimer says, is her ultimate goal.

Providing women with the tools to cultivate a peaceful home and a good marriage has long been her mission — she first launched her weekly show while researching her 2017 book, Marriage Secrets: A Woman’s Guide to Make Your Marriage Even Better. “You go to a kosher grocery store, and ask the women standing in line what are the rules to keep a kosher home; they’ll all tell you exactly what to do,” she says. “But ask them what are the Jewish rules to have shalom bayit and they draw a blank!”

As Richeimer tells her listeners, marriage is different from other areas of modern life: In the workplace, women are judged by one set of metrics, and are right to demand equality. But success at home is a different calculation; there, it’s about the measure of shalom, or peace, she says. “The way you can get to shalom is each side giving in, each side not controlling each other,” she explains. “Even in a complicated, tension-filled marriage, there is always something a woman can do to bring back closeness.”

Richeimer has some concrete advice as to what this looks like — and it doesn’t necessarily mesh with the way many of us perceive modern marriages. “Try not to say a word when your husband is driving,” she suggests. “Yes, he cut off another driver. Yes, he came too close to that truck… But just watch how much tension is removed from your neck and shoulders by just letting it all go. Just keep telling yourself, ‘I am keeping quiet for shalom.’ This does take practice, but you will witness that a new husband emerges — one who feels closer to you than ever.”

Many of Richeimer’s new fans find the advice on The Ladies Talk Show universal enough to apply to any marriage — regardless of the couple’s religion. One non-Jewish Massachusetts mother of one — who asked that her name not be used — describes the show as “inspirational” and “fun;” an easy way to gain marriage advice while being entertained.

For Dina Friedman, a Brooklyn-based listener and a mom of two, Richeimer’s advice has had a lasting impact. “Whenever I am unsure if I should do or say something to my husband, I stop myself and think, ‘Will this bring me shalom or not?’” she explains. “Taking that moment to pause has saved me from many arguments and fights, and has created more closeness and connection with my husband.”

Richeimer’s no-nonsense advice might sound old-fashioned and outdated, maybe even offensive to modern women. But Richeimer insists that, once women try it, “even the most staunch feminists tell me that they have never been happier in their marriages,” she says. “There is something very precious about having that closeness they have so longed for, while maintaining their own dignity and power.”

She adds: “Part of the reason so many women are flocking to the show these days is that they give it a try and find that this ancient wisdom actually works.”