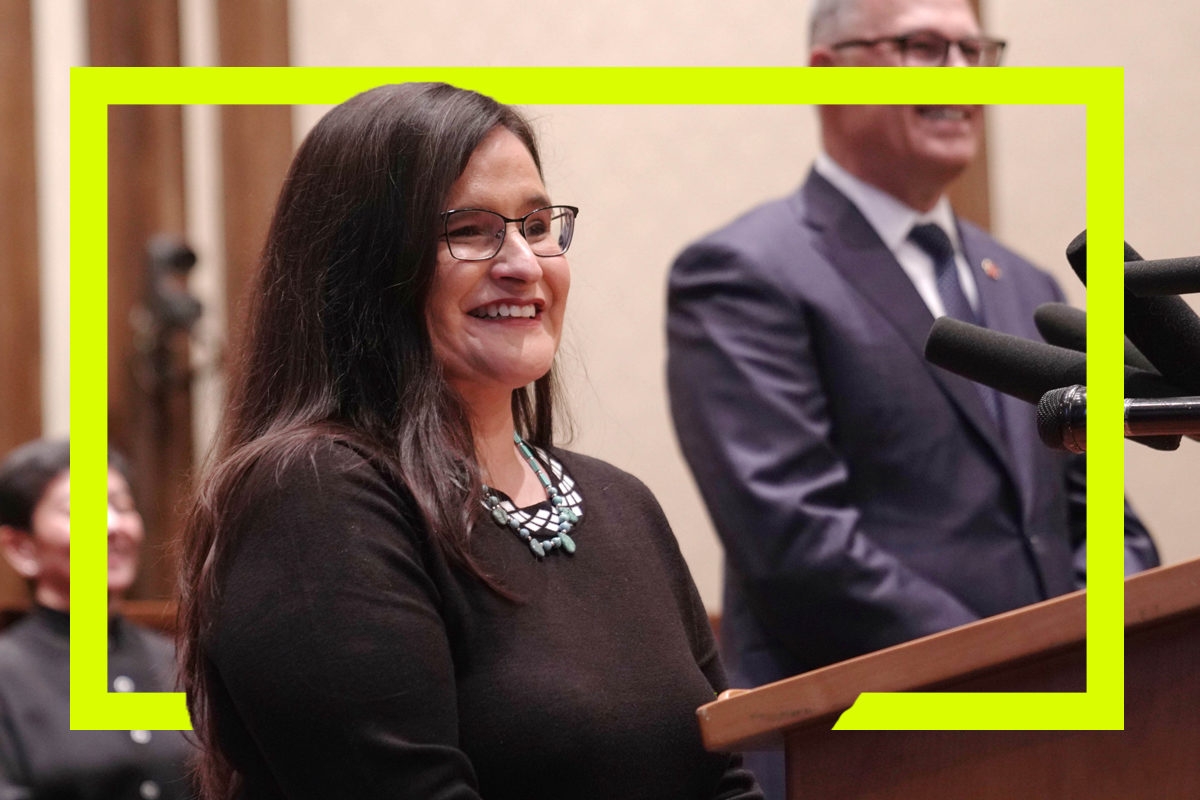 When Justice Raquel Montoya-Lewis was sworn in to Washington’s Supreme Court earlier this month, she became the second-ever Native American person to serve on a state Supreme Court.

“This was never something I really planned on or expected to happen,” Montoya-Lewis tells Kveller via phone from her offices in Olympia, Washington.

When she first heard of her appointment by Governor Jay Inslee, her reaction was “disbelief,” she says. You see, Montoya-Lewis never intended to be a lawyer or a judge — even when she was in law school. “My intention, when I went to law school, was to study how institutions impact people; the law was something that I looked at as being an institution that had incredibly widespread impact,” she says. “My goal was to be a professor, rather than be a lawyer.” 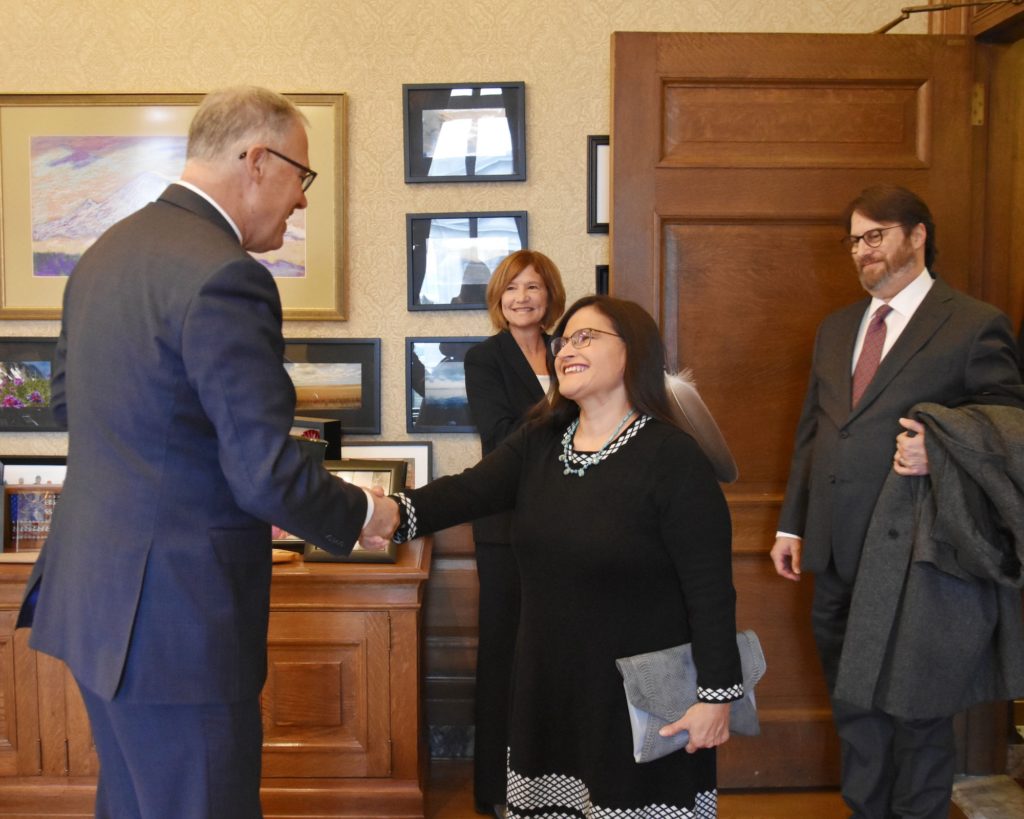 Montoya-Lewis was born in Spain in 1968 to a Native American father and an Australian Jewish mother. Growing up, the importance of education was instilled in her by her parents: “From both sides of my family [there is] a very heavy emphasis on the importance of education, which is something that has really been the key to my ability to do what I’ve done. To take my education seriously, and to be able to go to college and beyond that has absolutely been foundational to my success,” she says.

“I think that [my] story is an unusual story and also a very American story,” she explains. “My father grew up in the Pueblo of Isleta in New Mexico, and joined the Air Force as a means of being able to go to college. He never really had a plan of staying in the Air Force long term, but that was what he ended up doing. He loved the military.”

Due to her father’s career, the family moved all over the place: Spain, England, Texas, South Carolina, and more. But they always came back to New Mexico to her family’s reservation for important times in her life. Her father retired when she was a junior in high school, and they moved to New Mexico permanently. (He passed away about 14 years ago.)

Moving to New Mexico “was an opportunity for me to really connect with my Native community,” she says. “Growing up, I had a lot of connection with my culturally Jewish heritage from my mother’s side of the family.”

Montoya-Lewis sees an overlap of her Jewish and Native identities — namely, persistence and resilience, which is something she hopes to transmit to her own children, ages 14 and 17. “On both sides of my family, governments, other entities, really sought to wipe us out,” she says. “My father really instilled in me the importance of recognizing that I came from people who persisted, people who were lucky enough to survive, and that my existence is dependent upon those people’s persistence and resilience. That’s something I hope I pass on to my own children. I hope they pass it on to their [children], because that’s a very important concept for both the Jewish side of my family and the Native side of my family.”

As it happens, there are very, very few Native American Jewish people. “I have met maybe three others,” Montoya-Lewis says. “So, I certainly can’t call that number a community. But, we do exist and I think that those communities have a lot in common with respect to those awful histories, and those powerful histories of survival.”

Her favorite Jewish tradition is displaying the menorah in the window during Hanukkah. “There’s a lot of power in the menorah in the window,” she says. “I really felt that strongly this past holiday season. After the horrible events in New York, I really felt it was really important to be visible in that way. I like the idea of having a presence that says that we’re still here.”

And her favorite Pubelo tradition is at “the essence of what it means to be Native,” as she calls it: a feast day. “On those days, many homes are open to anyone — not just tribal members — who can come in, and sit at what are typically very long tables set up in the biggest room of the house, and take a seat and eat with everyone else. It’s been my experience over my life when I’ve done that, that you are always sitting with people you don’t know, and often in houses where you don’t know the people who are feeding you. That tradition, to me, is kind of the essence of what it means to be Native: Our homes are open, our hearts are open and we feed people. The spirit of that is something that’s very important to me.”

Montoya-Lewis’s judicial career began with her own tribe. She graduated from University of Washington School of Law in 1992, then she went on to get a master’s degree in social work. After graduating, however, she quickly started her judicial career. “I was asked by my own tribe to hear one case, a very complex civil litigation case that the tribal court didn’t have a judge with my kind of legal training to hear it,” she recalls. “It was really advised by my father, as well as Justice Pamela Minzner, the justice I had clerked for right after law school and before I started practicing law, that I needed more time to be a lawyer before I became a judge. And that was good advice.”

“But I didn’t take that advice,” she adds, laughing. “I chose to do it anyway.” It started out with just one case, then another, and eventually, being a tribal judge became a consistent part of Montoya-Lewis’s work. 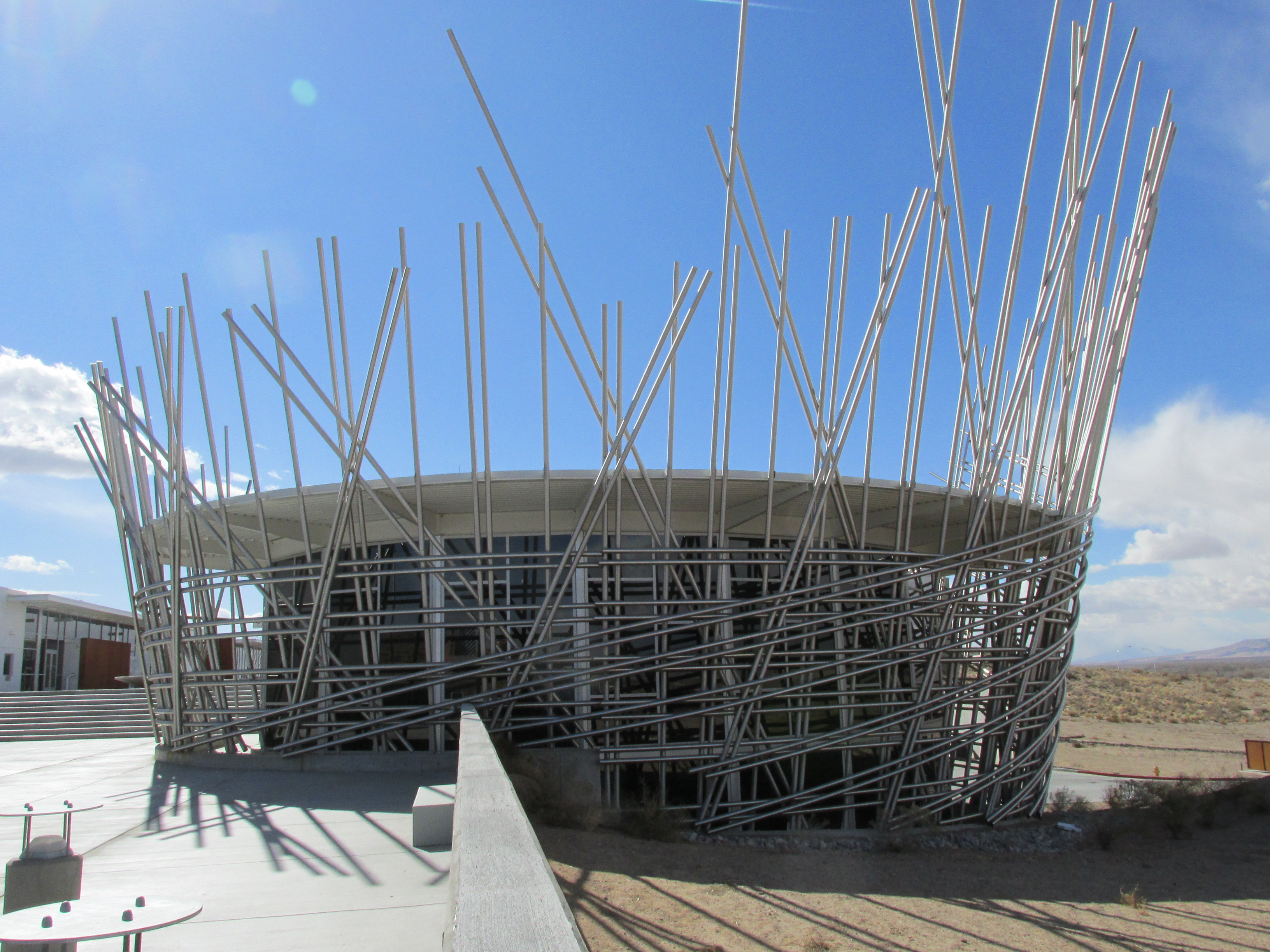 While working as a tribal judge, Montoya-Lewis also taught at University of New Mexico Law School. She then ended up in Washington as a professor at Western Washington University. “I, again, didn’t really have any intention to continue being a judge,” she says. But soon enough, in Washington, she served as a Chief Judge for the Lummi Nation, the Nooksack Indian Tribe, and the Upper Skagit Indian Tribe, as well as an appellate judge for the Nisqually Tribe and the Northwest Intertribal Court System.

It is rare for tribal judges to enter the state and federal court systems. In fact, “It’s completely atypical,” she says.

According to Montoya-Lewis, there are only a handful of state court judges who are Native Americans, and “maybe one other” who worked for tribes then moved to the state court system. And in the federal court system, Montoya-Lewis named the two other Native people she knows of currently working: Diane Humetewa, a U.S. District Judge who is currently in Arizona, and Anne McKeig, a justice in Minnesota who has Native heritage and is currently on the Minnesota State Supreme Court. (Michael Burrage, a member of the Choctaw nation, served as a federal judge from 1994 to 2001.)

“And then there’s me,” Montoya-Lewis says.

“When I applied for appointment to Superior Court — which is the trial level in Washington State where we do civil trials and criminal felony trials, among other things — there really was no example that I could see in the country of someone having had a career working for tribes and tribal courts making the leap to the state court side,” she says. (Montoya-Lewis served on the Whatcom County Superior Court from 2015 until she started on Washington’s Supreme Court earlier this month.) “It was not something I ever expected to happen, because I think it really took some courage and vision on the part of Governor Inslee, who made [my] initial appointment to Superior Court, to imagine that not only that I could do it, but that the community I was going to work with would recognize I was capable of doing that work.” 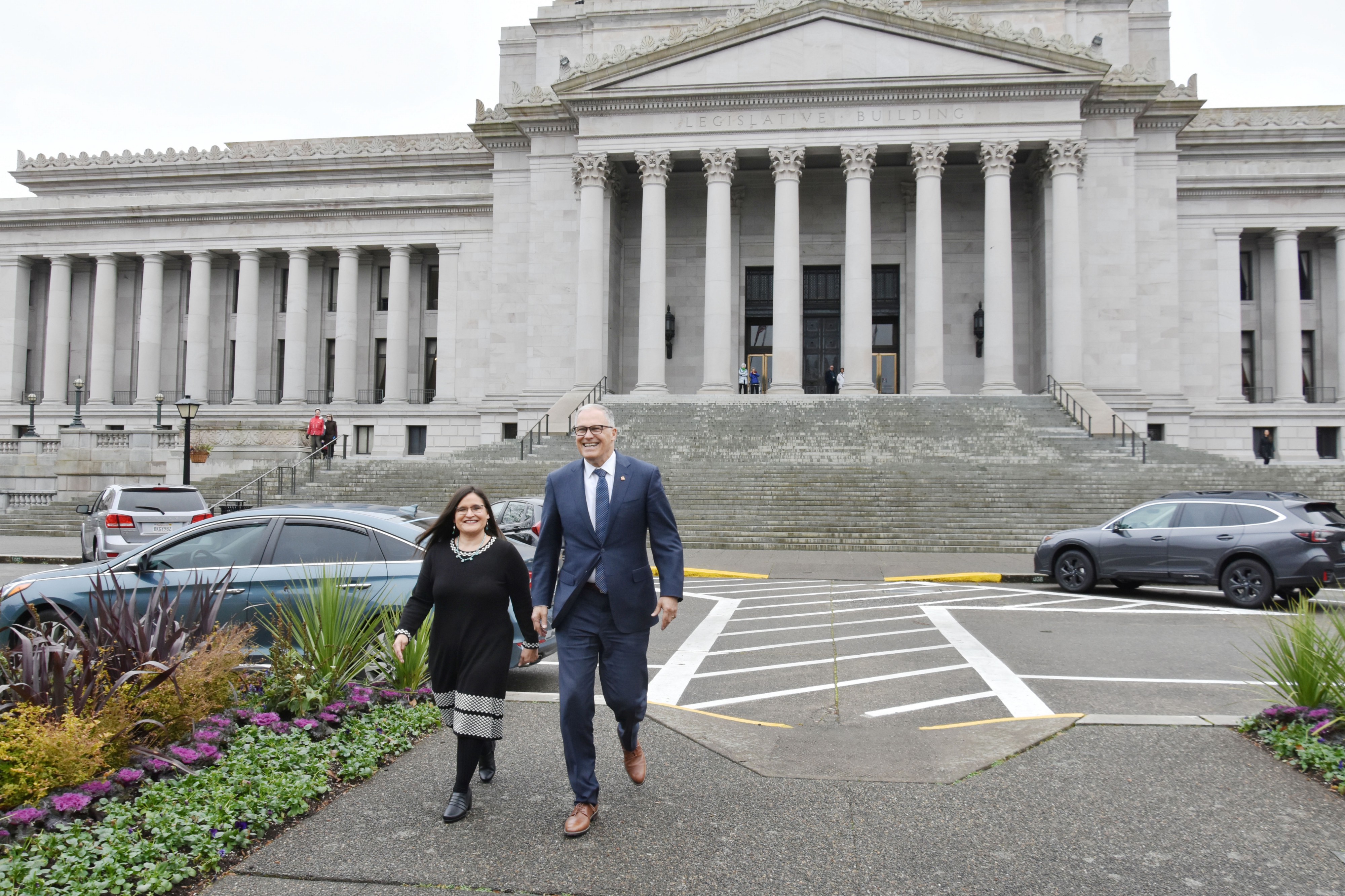 Gov. Jay Inslee and Judge Raquel Montoya-Lewis walk together from the Capitol Building to the Temple of Justice. (Office of the Governor photo)

Montoya-Lewis had no role models when she moved from the tribal court system to the state courts. But now, her career is paving the way for others to follow.

“When I’ve looked for my own role models and people I wanted to model my career after, it certainly took some imagination and some leaps of faith,” she says. “I’m hopeful that what I’m doing will be an example, but I also think it’s important that I am actually out there actively mentoring people who are interested in this path, who think that there is not a way for them.”

Montoya-Lewis is acutely aware of the struggles many Native Americans face in the judicial system. While Native judges are rare, Native Americans are “disproportionately represented on every level of the criminal justice system,” she said. In her new role, she is continuing her commitment to justice for all.

“Before you called, I was downstairs by the Supreme Court courtroom, and there was a classroom of third or fourth graders, getting a lesson on the way the court system works,” Montoya-Lewis says. “It gives me hope that those kids will see themselves as having any courthouse in their own communities as being a place where they belong. What gives me hope is that there are many doors that are opening that have been closed.”