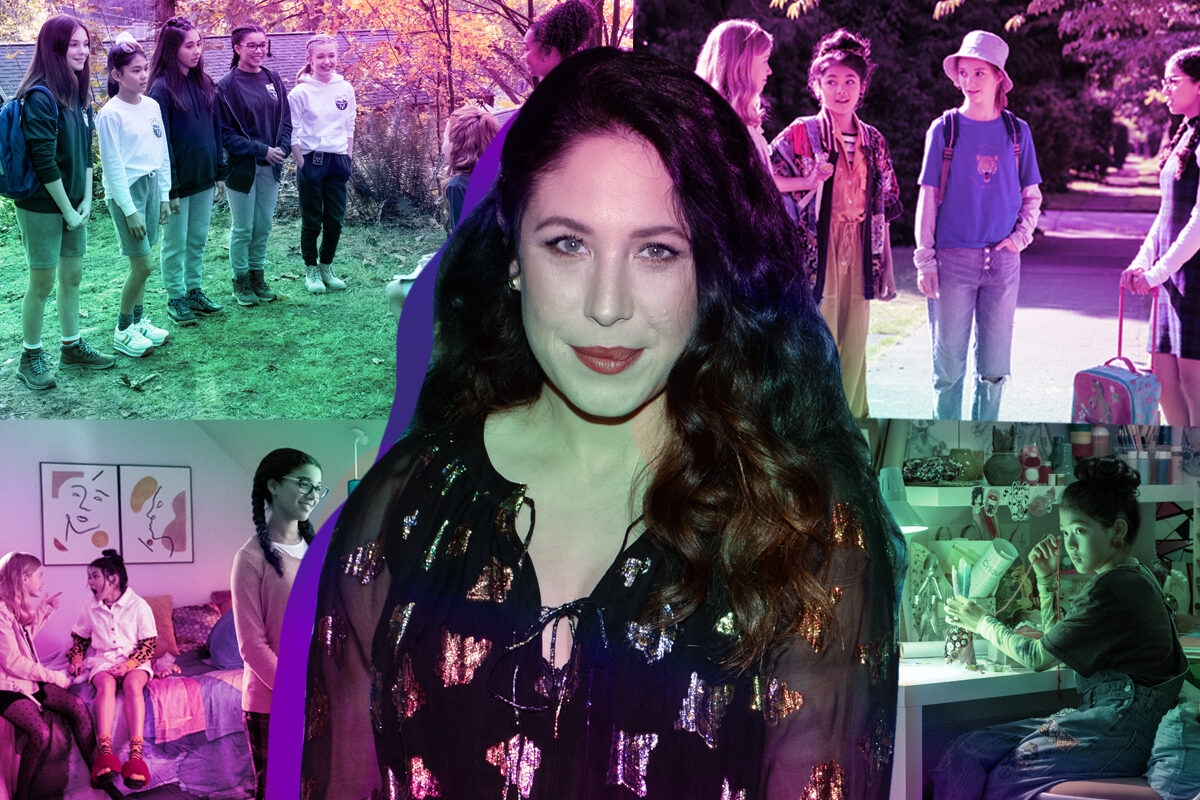 We all need a babysitter right now — a real one because, duh, pandemic parenting. But also, we all truly need the new Netflix adaptation of The Baby-Sitters Club. It’s a socially conscious, well-acted, and flawlessly crafted series, one that will bring you the joyful thrill of nostalgia if you grew up on Kristy, Mary Anne, Claudia, Stacey, and Dawn, in all their iterations. And, for the uninitiated, the show also provides a captivating introduction to the young teen babysitters from the fictional town of Stoneybrook, Connecticut.

Rachel Shukert, 40, is the incredibly accomplished Jewish showrunner behind this fresh adaptation. It’s not her first Netflix hit: She’s also a writer and producer on the marvelous GLOW.  She’s written for Supergirl and is also the author of five books. But when I talk to her on the phone, she sounds like any busy mom in need of the Baby-Sitters Club’s services: She’s propping up Duplo blocks for her 3-year-old son, Theo; shushing her excited dog; and answering questions about growing up Jewish in Omaha — “an unusual origin story,” she says.

It was there, in Nebraska, that Shukert got her first taste of Anne M. Martin’s legendary books. “I got [it] as a birthday present,” she says. “And it was number nine, The Ghost at Dawn’s House, and this must have been, like, 1989.” The novel almost went the way of many gifted books — unread, collecting dust on a bookshelf.

“It didn’t really seem that interesting,” Shukert admits. “But I was one day I had nothing to read and, I was like, ‘Oh, I’ll read this book.’ And I got completely hooked.”

At the same time, it seemed that everyone at her small private Jewish school, Friedel Jewish Academy, also caught the craze: “Suddenly, there was like this whole universe of The Baby-Sitters Club that we were all like very deeply enmeshed with,” she says.

Shukert’s favorite character was Claudia, who was, at the series’ outset, the only non-white member of The Baby-Sitters Club. “I was one of the only Jewish people where I lived,” Shukert says. “Even though we were different ethnicities, I ended up with this feeling of having a sort of invisible difference.”

Fast-forward to 2017 and Shukert is 3 months postpartum and living in Los Angeles. She’s back at work, on the set of GLOW, when she’s approached about this new BSC adaptation. “I was completely in this postpartum psychosis, where I was working but also not sleeping, and hadn’t slept in months and just barely remembered my own name,” she says. “I was like fully blacked out, but I remembered all these details with The Baby-Sitters Club.”

And so, for the first time in her career, Shukert became a showrunner. Being a mom, she says, helped enable her able to spearhead such an ambitious project: “There are a lot of plates to keep in the air and it’s very much like being a parent,” she says. “In that way you’re like, OK: Here are the 70 things that need to get done today. Which one do I absolutely have to do first? Which one can wait an hour or two hours? Which ones can I do at the same time? The way that your brain reorganizes itself when you have a kid really lends itself to being a showrunner.”

Parenthood also provided Shukert with a new perspective on the BSC books. “I started to think about it in this sort of multi-generational way, which I had not thought about as a kid — you know, the parents are just these kinds of ciphers to you, and it’s like, ‘Oh, that’s Kristy’s mom,’ whatever, you don’t even know her name,” she says.

In one particular scene, Alicia Silverstone, who plays Kristy’s mom (her name is Elizabeth, by the way) is looking for childcare everywhere —  online, on the phone, and no one is available, or trust-worthy, or not behind a paywall. It’s such a relatable moment for any parent.

But it’s not just the parents in the show that Shukert and her writing team get right — she nails the teen characters, too. One of the truly outstanding achievements of this show is how natural the girls’ dialogue feels. Shukert says she took a lot of inspiration from the five actresses who played the main characters: Sophie Grace (Kristy), Momona Tamada (Claudia), Shay Rudolph (Stacey), Malia Baker (Mary Anne), and Xochitil Gomez (Dawn). “There’s a lot more latitude to this than I think people sometimes realize,” she says. “They’re all really smart and articulate, but they also are girls, and they have big feelings, and they’re silly. Finding that balance was the trick.”

Shukert’s adaptation treats Martin’s books with a kind of reverence. While the TV show is absolutely groundbreaking and modern — featuring queer parents, trans kids, and a diverse main cast — it is all those things very much in the spirit of the original books, which were also were ahead of their time when it came to representation.

Shukert says she didn’t realize that her favorite character growing up, Claudia, was such a lodestar for Asian American girls. “Not only was she Asian American, she was also very not stereotypical,” she says. “She’s very artistic. She’s not good at math. She’s not the sort of character that, when there was an Asian kid at all, that’s who they were.”

As a showrunner, Shukert found she connected most with Claudia’s character, too. “The episode where Claudia’s grandmother has a stroke, and then she relives her memories of being in an internment camp, was incredibly personal to me,” Shukert says. “Although my grandfather was not in an internment camp, he was a refugee from Poland. I remember when I was a little kid, and he was starting to struggle with dAementia, we would go visit him in the nursing home, and he would sometimes be trapped in these like horrible memories from his childhood, weeping and afraid… It was very scary for me as a little kid, and I remember it really intensely, and I remember how it felt, so that story really came from that. Even though it’s a different circumstance, the feeling behind it’s the same.”

These small but emotionally resonant moments of representation are at the center of this show. In one storyline, Mary Anne babysits a young trans girl named Bailey who loves playing princesses — while the storyline is an opportunity to portray good allyship, and the importance of standing up for others, showing Mary Anne calling out a doctor and nurse for misgendering Bailey when she gets sick —  the story is ultimately a beautiful, unique, and fully-fleshed-out portrayal of trans children. “Like, there are trans kids, they exist,” Shukert says.  “They also are just kids, who like to play and sometimes get sick and need babysitters. I feel like it’s so easy to turn people into social issues when they’re really just people.”

These days, so much of YA programming involves big drama or supernatural fights against evil — but what stood out to Shukert is that for the BSC members, heroism is something smaller, and very connected to the times we’re living in. “These girls are just like, ‘I am going to be a really good babysitter to this kid who has a fever,'” she says. “I feel like, at this moment in time, none of us can really solve [this pandemic], but all of us can do this small thing, like staying in our home, like wearing a mask, like not putting other people at risk. To me, it feels like a really positive message that even when it doesn’t feel like you’re making a huge difference — you are making a huge difference by doing a small thing.”

At a stressful time in which our kids feel particularly powerless, BSC provides girls, in particular, the opportunity to see their potential to be powerful and impactful. “There are not a lot of instances, in real life or fiction, where you see young girls being treated seriously,” she says. “I feel like you see a lot of tween girls, and they scream and are silly, and they’re sort of over the top and hormonal.”

Image via by Andrew Toth/WireImage/Netflix