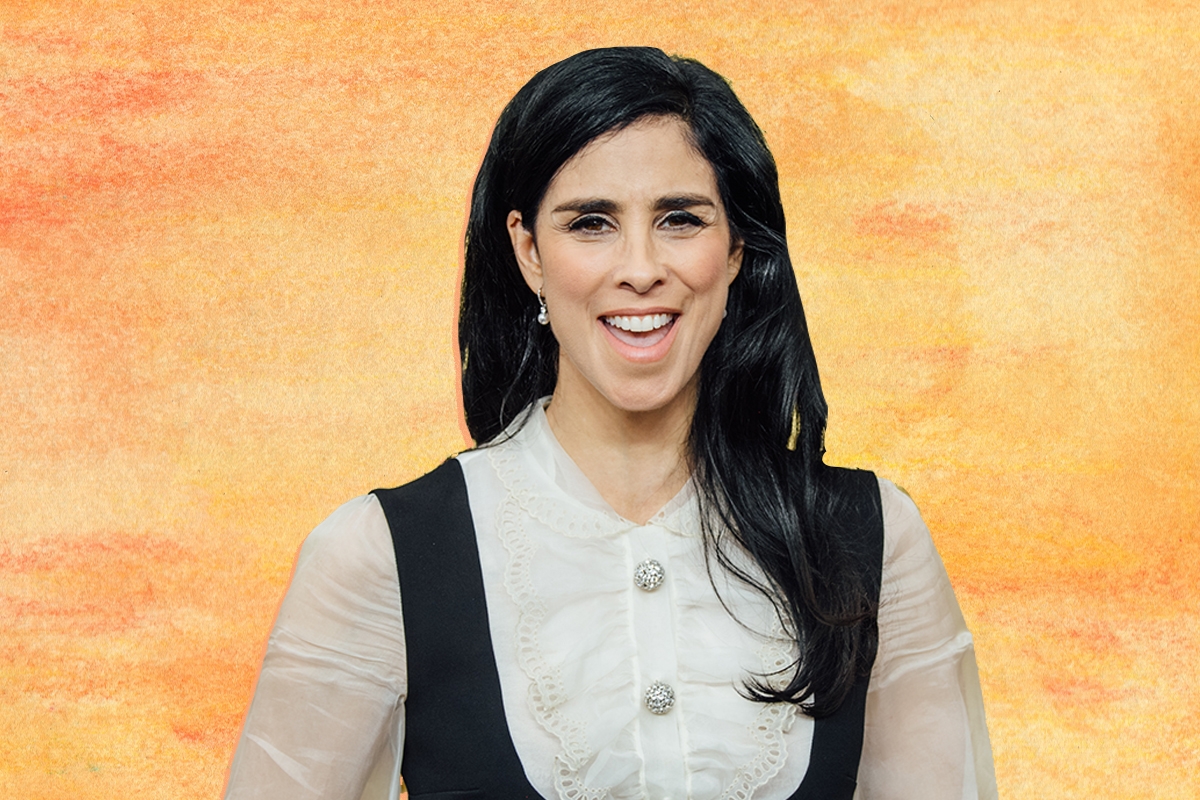 Jewish comedian Sarah Silverman always has a refreshing take on life’s conundrums. What’s more, we love just how open she is about her Jewish identity. Silverman proudly discusses her Jewishness in whatever she’s doing — whether she’s posting on social media, being interviewed by someone (see: her recent conversation with Howard Stern about how Jewish women should play Jewish characters) or hosting her own podcast.

Jewish content is a regular feature of the Sarah Silverman Podcast. In March of this year, she hosted an episode that addressed Jewish stereotypes head-on and implored non-Jews to be allies of the Jewish community. “I feel bad, because I feel like this podcast has become very Jew-heavy,” she began, before addressing the dangers of antisemitism.

This week’s episode (“E46 Tootsie Teeth, Braless, Vulva”) continues the Jewish trend. This recent episode is chockablock with Jewish content: she calls her father a Yiddish-sounding endearment, “shleppie;” she describes her partner, comedian Rory Albanese, as being a mensch (“he’s the shit and I’m knee-deep in it,” she says); and she points out how a photo of Jewish comedians Carl Reiner and Mel Brooks help form the background of her set. (Silverman’s podcast is also available on YouTube; you’ll see the photo of the iconic duo to the left of where she sits.)

But what we’re really kvelling about today is the incredible advice about mothers and daughters that Silverman gave to a fan. A 20-year-old woman named Elizabeth — who had recently had breast-reduction surgery — called in to ask her advice about how her mom was dealing with her choice to not wear a bra.

Evidently, Elizabeth’s mom said this choice made her look “trashy and bad.” (Oof!)  She confides: “I don’t want to wear a bra just to appease her because I find them so uncomfortable, but I don’t want there to be more problems. I don’t think she should be talking to me like that.”

OK, can we take a moment to say WE FEEL THIS. There’s been a noticeable anti-bra movement making waves these past few years; Vogue, FWIW, declared that 2020 may be “the end of the line for the bra.” During the pandemic, many of us decided to stop wearing things that are uncomfortable — you know, things like heels, pants and, of course, bras. We’re already under more than enough stress, thankyouverymuch, so if something isn’t comfortable, why wear it?

Silverman, however, smartly realizes the problem here isn’t really about bras, and she comes back with a much more thoughtful response about the conflict between Elizabeth and her mother. “I mean listen, we all have our mishegas with our mothers,” she says, using the Yiddish term for “craziness.”

“This is for some reason important to her,” Silverman continues. “It seems to be important to many moms.” We have to agree here — many of us can relate to comments that our moms may have made about our bodies in the past, and the damage it does to our self-esteem. (We’d also like to take a moment here to celebrate those moms who are trying their hardest not to pass body-image issues onto their own children. We see you!)

“Your mom is not a bad person, this is what moms do,” Silverman tells the caller. “I promise it has less to do with you and more about how she feels about herself.”

Silverman then shares some advice that can only be summarized as “pick your battles.” She concludes: “You can get really upset or you can just laugh and kiss her forehead and say ‘I love you mom, and I’m sorry my boobs are not high enough for your comfort, but you’re going to have to find a way to love me anyway.’”

Like so much of what Silverman does, her advice is hilarious, to the point and perfectly said. You can see her full response here in this Instagram clip:

Silverman may not be a mom herself, but we love how she displays empathy to both parties here. Sometimes, she notes, parents say things that are more a reflection of themselves than about us; sometimes, kids need to go against their parents’ wishes for their own best interest. And unlike many comedians — who may be tempted to insert a Jewish mother joke here — it’s refreshingly mature to see Silverman conclude that the bond between mothers and daughters is far stronger these small-scale disagreements. In short, bra or no bra, love is what matters most — and we love you, Sarah, for reminding us of this important truth.