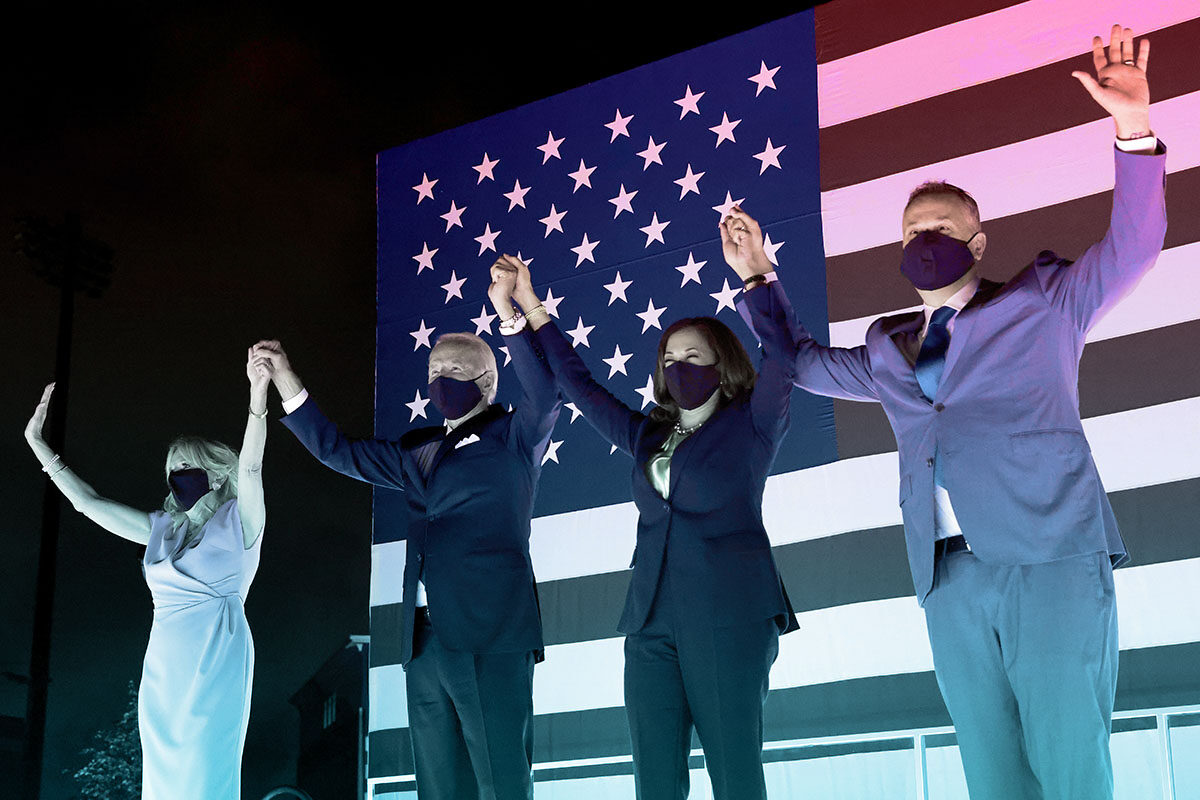 Since Kamala Harris was tapped as Joe Biden’s running mate, she and her Jewish husband, Douglas Emhoff, have given us some good reasons to kvell. We’ve been delighted by the couple’s connections Jewish values and culture, from Harris’ Yiddish-ish nickname, Momala, to her spot-on impression of her Jewish mother-in-law.

It’s been charming to watch our potential Second Gentleman (or whatever Emhoff’s title would be as the husband of the first-ever female vice president… Second Dude?) to express such outspoken, unabashed support for his wife as she hits the campaign trail.

Equally charming has been Emhoff’s support of her running mate, Biden. In fact, Emhoff has regularly used a Yiddish word to describe the Democratic presidential nominee: mensch.

This iconic Yiddish word means “a person of integrity and honor.” Now, I don’t know about you, but I think that’s a necessary attribute for anyone who hopes to lead our country the next four years — and that’s true regardless of whatever your political leanings may be.

Emhoff has dubbed Biden a mensch in front of significant crowds at least two times in the past two weeks. The Forward reports that at the Pennsylvania launch of Jewish Americans for Biden  on Sept. 3, Emhoff said, “Joe Biden is a mensch, and we need a mensch in the White House. We need a mensch to restore the soul of this nation.”

Then, at a fundraiser with Lawyers for Biden this past Wednesday, Jewish Insider reports that Emhoff called Joe Biden a “menschy dude.”

As JTA has reported, Biden has shown up for Jewish communities in many ways, from his commitment to protection against hate crimes, anti-Semitic and otherwise, upon the the anniversary of the Poway synagogue shooting, to his recent heartfelt conversation about healthcare with Jewish activist Ady Barkan. Biden often uses his own experiences with losing his children to connect with victims of violence, and makes clear his love for his family and children (two of whom married Jews, by the way).

For so many of us, this occasional use of Yiddish by Harris and Emhoff is an unexpected joy in these difficult times. As Kveller writer Stacy Mintzer Herlihy recently wrote about Harris’s Momala nickname, which is very similar to the Yiddish diminutive, mamaleh: “For Harris and her stepchildren, as it is for so many of us, this term of endearment is our way of welcoming her into our corner of the world. I know my mom and my grandma would have loved to see how the Emhoff kids celebrated Harris in a language they knew so well.”

Of course, actions speak louder than words — and that’s something which Emhoff, an entertainment lawyer, is well aware of. “All of us have that aunt, uncle, sibling and friend who is just going to go to the mat saying, ‘Donald Trump is good for Israel,'” he said at the Jewish Americans for Biden event.

“They’ll say it’s all worth it, because he moved the embassy to Jerusalem,” he continued. “Well, I reject that idea that you have to choose between a president who is good for Israel, allegedly, [or] a president who lives by the values at the core of our faith. With Joe Biden, we get both.”