'Shut Up' Is Taboo in My Home. So Why Did I Cheer When I Heard It During the Presidential Debate? – Kveller
Skip to Content Skip to Footer

‘Shut Up’ Is Taboo in My Home. So Why Did I Cheer When I Heard It During the Presidential Debate? 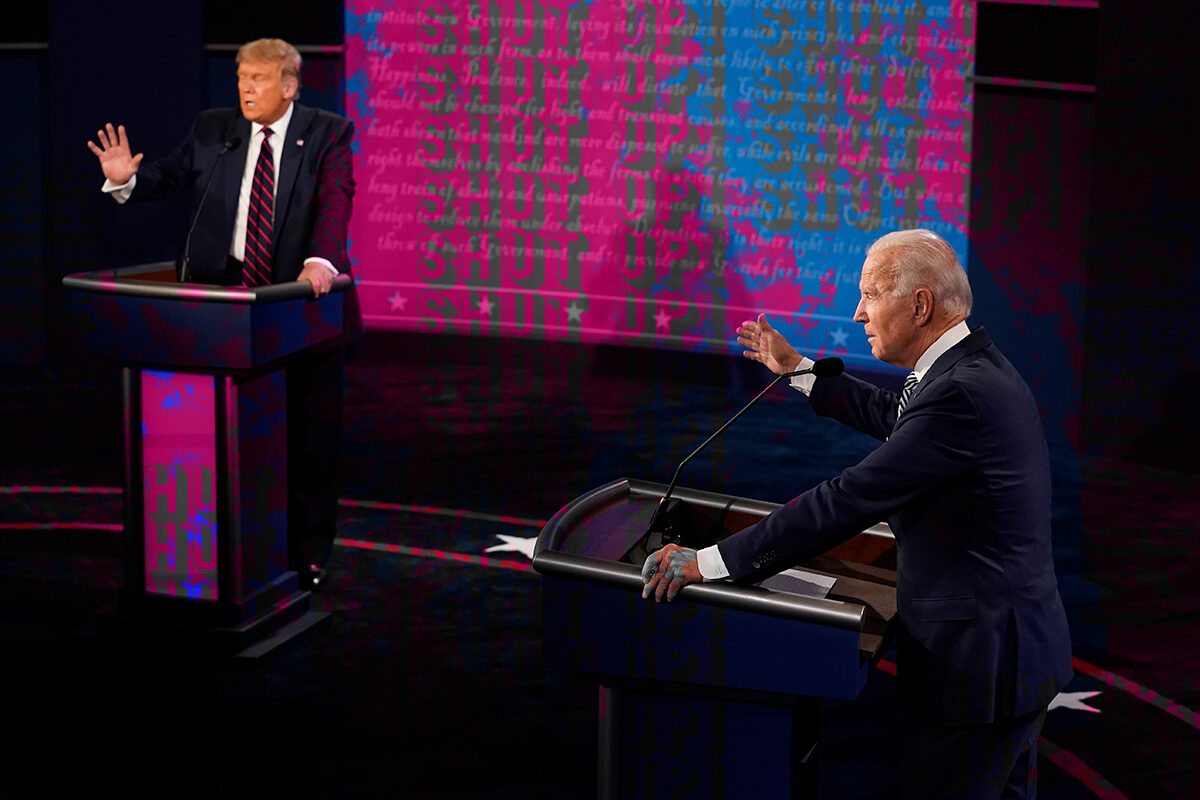 There are several words and phrases that are frequently used in my family, like “be quiet.” Or “shhhhhh.” Or my personal favorite, the Hebrew “sheket bevakasha,” which very effectively sounds severe but actually just means “please be quiet.”

In other words, my family can be seriously noisy at very inopportune times. They need frequent reminders to tone it down a bit — especially these days, when we’re all inside our cramped apartment all the time. But the phrase “shut up” is not used in our family, as I find it to be rude, inappropriate, and unnecessarily aggressive.

When my kids were younger, the occasional “shut up” lobbed between them was met with swift, fair consequence — usually a stern talking-to or a short time out and a reminder that we simply do not use these words in our home.

Now that my boys are getting older — 10 and almost 13 — and we’ve all been living on top of one another for six months and counting, with school at home and literally nowhere to go, I admit there are bad days when I overhear my kids saying “shut up” to one another. These moments, when I catch them, I feel my heart break just a little. I tell them to knock it off — usually my request is met by the offending child providing a revised statement, such as, “Please be quiet, younger brother whom I love so very much”  — before I slip my noise-canceling headphones back on my ears and get on with my day. Because, pandemic parenting with a full-time job.

But then came the first presidential debate of 2020.

In that “hot mess inside a dumpster fire inside a train wreck” that aired on national television last night, President Trump wasted no time heckling Biden (as well as the moderator, Fox News’ Chris Wallace) — interrupting him, taunting him, and just generally being the ill-mannered bully that everyone knows that he is.

At times, Biden seemed to hardly get a word in edgewise. As the minutes passed, the nauseous pit in my stomach continued to churn and grow. And then, as Biden was answering a question about the Supreme Court nomination — making a direct appeal to viewers at home to “vote now” — as Trump continued speaking over him, Biden stopped.

“Will you shut up, man,” he said, shaking his head.

And before I could even process what happened, an excited  “Whoooooooop!” escaped from my mouth.

Almost immediately, I questioned my reaction. Did I do an 180 on my feelings about the phrase? Am I a total hypocrite? If I would theoretically punish my kids if they said “shut up” to someone with authority, why did this moment fill me with such glee?

The more I thought about it, the more I realized there is a time and a place for just about everything, including “shut up.” It is clearly never, ever appropriate for a kid to say that to a parent or teacher (fortunately, we have yet to encounter this issue); nor is it appropriate to say to your brother when he’s going on and on about a Fortnite Battle Pass and all you want to do is go to sleep (um… no comment). Never in my decades on this planet did I ever think that an appropriate use of “shut up” would arise during a presidential debate — but it’s 2020 and, well, here we are.

As parents, one of the first and most important things we teach our kids is that our words matter. We teach our children to be kind, to not say hurtful things, and that it’s essential to be polite and use simple words like “please” and “thank you.” We remind them that using these words make everyday interactions far more pleasant, and they usually quickly realize employing them is an excellent strategy for getting a grownup to pour them a second glass of juice.

The importance of words is also a very Jewish concept. As Rabbi Rebecca Rosenthal wrote in Kveller almost exactly four years ago, when Trump faced off against Hilary Clinton:

“Judaism tells us that the words you put out into the world really, really matter.”

She continues: “When God created the world, God uses words, not objects, to bring the world into being. If the world can be created with words, it can also be destroyed with them.”

Rosenthal wrote these words in the aftermath of the infamous leaked “grab ‘em by the pussy” tape, which Trump and company dismissed as “locker room talk.” (It’s also worth noting that, at the time, most people assumed that a person who would use such vulgar, misogynistic language would not make it to the highest office in the land.)

Looking back on Trump’s  presidency, my chest tightens as I think back the many instances in which his words have caused destruction. Let’s start with his statement after 2017’s Unite the Right rally in Charlottesville, Virginia — which had people chanting in the streets, “Jews will not replace us!” — to which Trump commented there were “fine people on both sides.” There’s his recent statement that the coronavirus “affects virtually nobody” — actually, 200,000 Americans have lost their lives to Covid-19 — or how, on a recent visit to wildfire-scarred California, he said, “I don’t think science knows,” when it came to acknowledging the role that climate change plays in the devastation.

The truth is, I’ve become so accustomed to these kinds of things that I was prepared to never be shocked by anything Trump ever said again. But then, as the debate continued, Trump was asked by Wallace to condemn white supremacists and militia groups, something that the president flat-out refused to do. Please, take a moment, and let that sink in.

Instead, when pressed, Trump said, “Proud Boys, stand back and stand by.”  Um, seriously? (Read more about the Proud Boys and their anti-Semitic ties here.)

In the face of such terrifying words from our president, it’s easy to view Biden’s calm but clear “shut up” as a natural reaction to an onslaught of verbal abuse, a retaliation akin to an Ewok shooting an arrow at an Imperial Walker. Many on Twitter praised Biden’s statement — my personal favorite is how Hilary Clinton herself weighed in on the matter — and the memes are making the rounds. The Biden-Harris campaign, for their part, is already selling a “Will You Shut Up, Man” T-shirt. I chuckled when I saw it but I do not plan to buy it — I would never wear the words “shut up” across my chest (and ditto for images of Donald Trump).

Still, as the saying goes, unprecedented times call for unprecedented measures. And between rising extremism, a pandemic, a climate emergency, and more, this moment is nothing if not unprecedented. At this juncture in the United States of America —  where the states are anything but united, and the nature of our democracy is teetering on a dangerous precipice — maybe it’s no longer appropriate nor effective to “go high when they go low.” As much as it pains me for my kids to hear a phrase that we banned in our house used in a presidential debate, we’ve also taught them, again and again, to stand up for what is right.