That Time Mandy Patinkin Wrote a Jewish Cookbook With His Mom 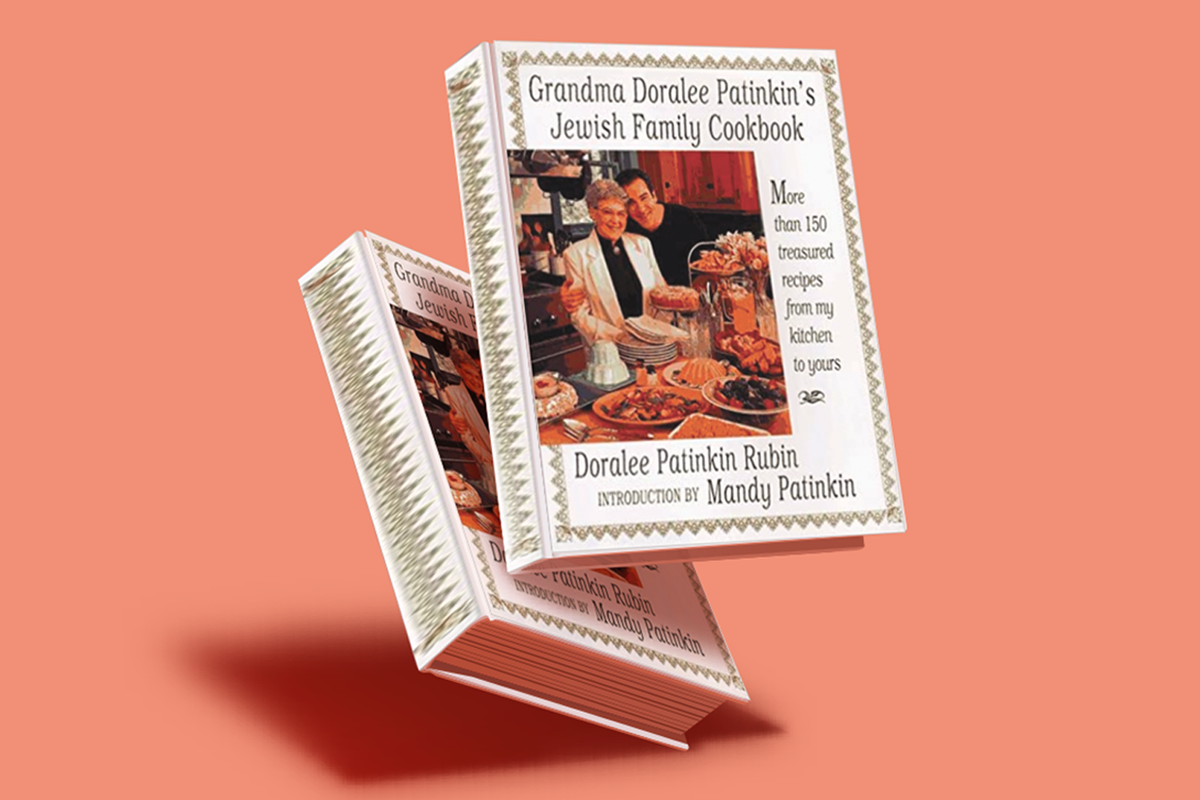 When a movie star needed to soften his image, he didn’t look for guidance from his publicist — he turned to his mother. After fame and ego gave Emmy and Tony winner Mandy Patinkin, star of “Yentl,” and “The Princess Bride,” a bad name in Hollywood circles, he booked his mom to help clean up his act. Their schtick: a Jewish family cookbook.

In the mid ‘90s, Mandy called his mother, Doralee Patinkin Rubin, to let her know a computer and printer would be arriving for her to start recording her home-cooked meals. Picture recipes of streusel, farfel and mandelbrot. The result: the publication of “Grandma Doralee Patinkin’s Jewish Family Cookbook,” with an “Introduction by Mandy Patinkin.”

With Mandy’s name alone, it was predicted to sell like pancakes — or in Jewish terms, kichels, kipfels and kuchen. Yet ingredients like a bottle of Bennetts chili sauce, an envelope of unflavored gelatin, a packet of sugar substitute, pounds of vegetable shortening, Kellogg’s All-Bran cereal and a package of frozen blintzes for an easy blintz souffle may be another reason why Mandy’s face is on the cover.

The mother-son dynamic duo promptly went on a book tour, which landed them on “The Rosie O’Donnell Show,” “Good Morning America,” the Food Network and “The Late Show with David Letterman.” The audience hollered when Doralee accidentally served horseradish to O’Donnell instead of chopped herring salad. And after years of performing with Letterman, Mandy’s final curtain call on “The Late Show” was with his mother. The last laugh was of the audience roaring when Doralee slapped David Letterman on the hand, on live TV, when he reached towards the Cuisinart.

Born Doris Lee Sinton in 1925, in Chicago, she married Lester Patinkin in 1948 and they had two children, Mandy and Marsha. Lester passed away in 1972 when Mandy was 19 and Marsha was 23. Doris went on to marry Stanley Rubin in 1974, combining their families to raise six children: Mandy, Marsha, Joanne, Neil, Alan and Bob. The family was heavily involved at their synagogue in Chicago’s Rodfei Zedik, which they considered a home away from home.

When she wasn’t promoting her book, the most important reviews came from her grandchildren, who all wrote a note of support published in her second book, “Grandma Doralee Patinkin’s Holiday Cookbook.” Doralee was a true show stopper, devoting her energy towards baking for her grandchildren. “Has cookies will travel,” was her motto. Upon visiting her family, freezers had to be empty. Suitcases filled with shoe boxes, lined with parchment paper, contained individually wrapped servings of pecan melts, mandel bread, streusel and lemon squares — desserts to feed guests attending the b’nei mitzvah celebrations for each of her 14 grandchildren. From California to Nevada to Chicago to New York, she was ready for the family’s most important performances. “A bar mitzvah simply could not take place minus the thousands of toffee bars,” granddaughter Lainie Rubenstein said in the second cookbook, “Grandma Doralee Patinkin’s Holiday Cookbook.

But don’t let the sweets fool you; she wasn’t all soft like the butter in her recipes — her suitcase resembled her tough exterior, with vulnerability and family stories packed up. Mandy’s father Lester Patinkin passed away from cancer after battling separate health complications when Mandy and his sister Marsha were teens. As Mandy said in a New York Times interview in 2013, “my mother was the voice, she had to run the show.”

Doralee’s dessert tray honored the Hanukkah story of Judith, who pretended to surrender to the Syrian Greeks. Judith lured an invading general Holofernes with her beauty, stuffed him with cheese and wine and, to save her town, beheaded him. For this reason, “A Cheesecake will always be served at my table for Hanukkah,” Doralee declared. Both Judith and Doralee, two unacclaimed Jewish widows and heroines, were determined to get the last laugh in their own right.

Before his mother’s passing in 2014, Mandy still needed to learn an important lesson from his family. The New York Times, titled a feature on Mandy in his own words: “I behaved abominably.” While Judaism teaches that an apology is an opportunity to reflect on our actions and make things right, it is also essential to actually change your behavior to show your remorse. It’s an important family lesson Mandy shared in the interview, saying, “My grandpa Max the junkman would say in Yiddish, ‘The wheel is always turning.’ What he meant was how to behave toward people. The person on the bottom of the wheel, you better be nice to, because at some point you’re going to be on the bottom.” Now often referred to as a mensch, it seems Mandy took the lesson to heart.

Ultimately, Doralee was as serious about death as she was about humor. “Oh dear, this can’t be good,” she said to Rabbi Bernstein when checked in on by her friend at the hospital during her last days. “Are you here for my final blessing?”

But on her final day, as granddaughter Amanda Patinkin recalls, Doralee awaited her family to arrive and then, as they gathered around her, she shushed them.