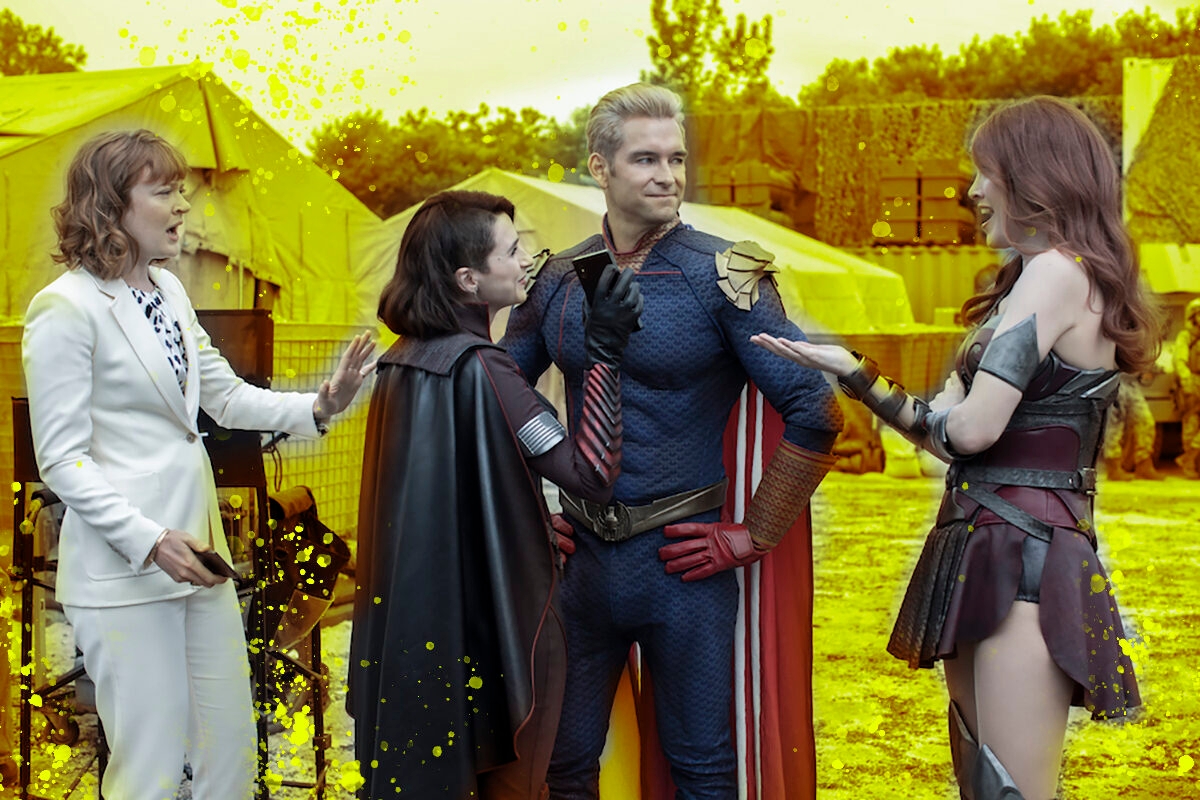 Nazis are invading our TVs. They’re getting brutally murdered Hunters, the controversial Amazon show about Nazi hunters in 1970s New York. They’re central characters in dystopian tales like Amazon’s Man in the High Castle, and HBO’s very excellent and harrowing Plot Against America.

Yes, all these shows depict Nazi plots to conquer America. But none are as powerful or as timely, in my opinion, as the one presented in season 2 of Amazon’s The Boys.

The second season of this anti-superhero series, now streaming on Prime, introduces us to a new character: Stormfront. Played by Aya Cash, this new superhero joins The Seven, the group of superheroes “owned” by mega-corporation Vought International. The Seven, like classic superheroes, have missions where they save the day. But more of their time is spent on PR, movie franchises, amusement parks, merchandise, and the likes, making big money for Vought. Each one of The Seven has his or her own dark secret, and based on Stormfront’s name — with matches that of a well-known white supremacist website — you may be able to guess hers.

Still, The Seven and its fans are instantly won over by Stormfront’s no-nonsense feminist charm. Stormfront tells things like they are. She’s from Portland, so she knows what’s up. She livestreams her reality, giving her fans a false sense of intimacy. She calls out Vought for its greed and its thirst to sell The Seven merch. And when Vought tries to promote her as a “girl power” addition to The Seven, she says about her tight superhero outfit: “You want to talk about girl power? Let’s talk about getting some pockets.”

It’s hard not to like Stormfront at first. She is everything we are conditioned to admire: a brazen woman who speaks her mind, who talks truth to power, and who, let’s face it, is traditionally beautiful enough to get away with all of it. But, slowly, we realize that there is something so much more sinister underneath all that.

Stormfront tells Starlight —  a fellow member of The Seven who is working with the vigilante group The Boys to help bring down Vought — that niceness doesn’t equal goodness. But Stormfront, undeterred, uses her beauty, her social media skills (and an army of meme-makers at her disposal), to promote xenophobia and fascism in a rather pretty and modern package.

“I realized what a perfect metaphor this was for the exact second we’re living in,” Jewish showrunner Eric Kripke told The New York Times. “For this world, where authoritarianism and celebrity are combined and fascism is packaged through social media.”

Stormfront, however, isn’t an outlier among The Seven: Homelander, the head of The Seven, is a self-centered spin on Captain America who wants to peddle a heroic image but is mostly concerned about his own status and power. In fact, he just may remind you of other self-obsessed, isolationist leaders.

Homelander insists that a recruitment ad for the Vought Army call for “saving America” — and not, as was suggested, “saving the world.” It’s an echo of the America First rhetoric that’s recently been peddled by Trump but originated in 1940 with the America First Committee, whose spokesperson was Nazi sympathizer Charles Lindbergh.

In the first episode of the second season, in a conversation between Homelander and Vought CEO Stan Edgar (played by Breaking Bad‘s amazing Giancarlo Esposito), the Nazi past of the company’s founder is revealed. As part of the Nazi regime, Vought did experiments on human subjects to try to infuse them with superpowers. It’s clear that Edgar, a Black man, does not espouse Nazi ideology — but he’s also happy to profit from the fruits of its labor.

The Boys reminds us that it doesn’t matter whether or not you believe in an ideology. If you pragmatically choose to use it for political or monetary gain, you are just as guilty of wrongdoing — if not more so.

There are no explicitly Jewish characters in the show, though I still want to believe that Frenchie, played by Israeli Tomer Capon, is Jewish. His character’s real name is Serge, like the famous Jewish French singer Serge Gainsbourg. He is from Marseilles, which has a big population of Mizrahi Jews, and he quotes Irving Yalom in one episode. (On the other hand, he talks about making very non-Kosher cassoulets with his mother, and offers a character a jambon beurre — a ham and butter sandwich — so yeah, maybe not.)

So, yes, The Boys isn’t a very Jewish show — but that doesn’t make its exploration of Nazism any less poignant. While it alludes to the history of the Holocaust, it is much more interested in how Nazi ideology takes form and spreads in these modern days. And that — as we are reminded by Charlottesville, and by the shootings in Poway and Tree of Life Synagogue — has direct, violent implications for Jews in this country, as well as for so many other minorities.

The Boys also aims to take apart the myth of American heroism. American superhero comics are, to an extent, a Jewish invention: Behind heroes like Captain America and Superman are Jewish American creators, many of whom suffered antisemitism in their youth. Still, they wove their stories into the fabric and the lore of American culture, creating a new, uniquely American mythology — one that is still peddled all over the world through many profitable movie franchises.

In their original iterations, many of these superheroes actively fought Nazis. These tales of heroism, most often helmed by white, non-Jewish characters, gave Americans something to believe and cheer for — especially when they first rose to popularity during WWII. But they also peddled an idea of righteousness and heroism that just isn’t right for our current reality, in which people are taking to the streets to cry for racial justice, and racist and xenophobic conspiracies spread rapidly thanks to social media.

“Look, I grew up in the Spielberg generation — I’m a huge fan of escapism,” Kripke said. “But we are living in a really fraught moment, and that demands some examination and discussion.”

As The Boys explores, true “heroism” requires constant discomfort, and constant questioning among those in power, and that’s something that’s true whether or not our leaders actually have superpowers. We are no longer in an age in which we can blindly believe in a hero’s righteousness. Similarly, The Boys, the vigilante group for which the series is named, doesn’t offer the “good”  alternative to The Seven’s “bad.” Rather, the show spotlights a group of flawed operatives trying to fight a powerful, misguided operation — but many of them are motivated by selfish motives. As viewers, we are never truly sure if they are doing the right thing for the right reasons.

It’s the perfect show for today’s world, a world in which we can’t look up at the sky for someone to save us. It’s a world in which we must all take responsibility for building a better reality, with both small and big — and, yes, sometimes flawed — steps.