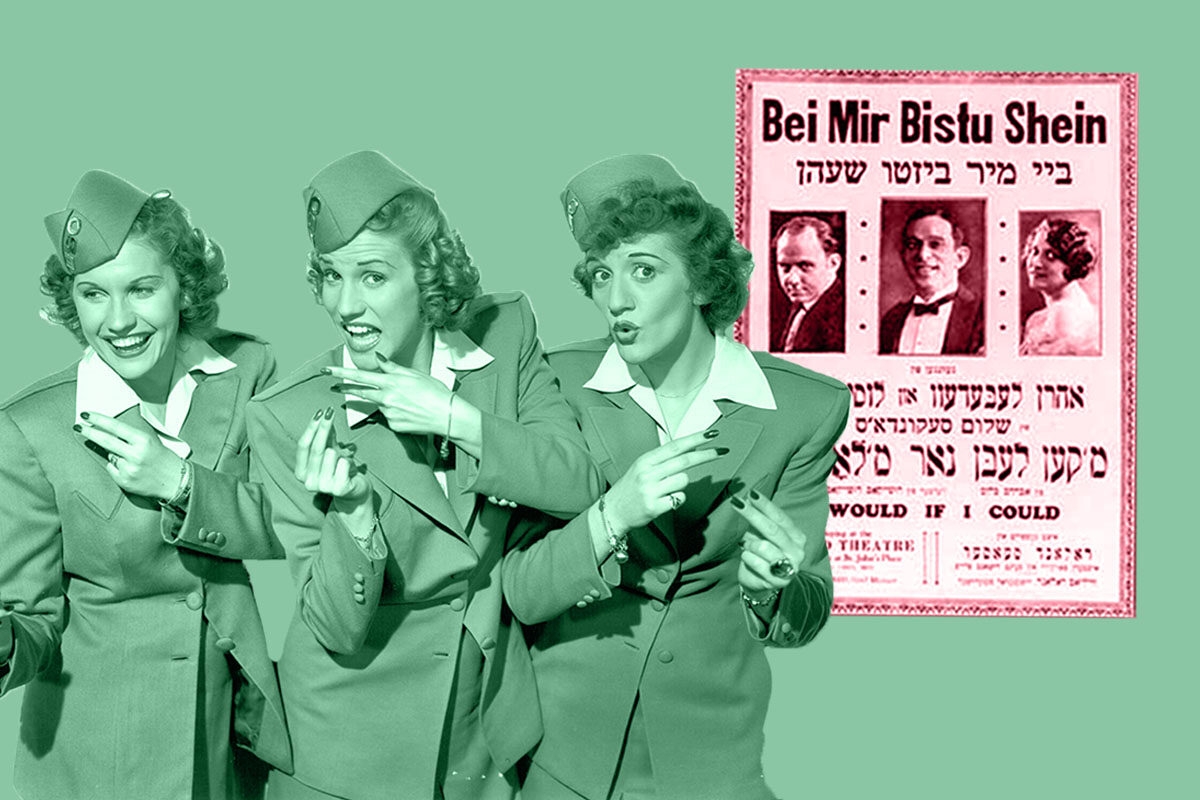 Printed in black and white and bigotry all over, Nazi official Hans Severus Ziegler’s brochure for his new public exhibit in Dusseldorf featured an African American jazz musician with a Star of David on his lapel. Designed to ridicule and belittle Jewish musicians for performing “Negro music” as another tactic to contaminate German culture, “Entartete Musik” (“Degenerate Music”) opened in May, 1938 — just four months before Kristallnacht.

By then a ban on “Negro jazz” had already been instated, three years prior, on German radio for its “hysterical rhythmic reverses characteristic of the barbarian races.”

And yet, in spite of this, a curious historical phenomena transpired the same year this exhibit opened its doors: Hitler’s Germany was obsessed with “Bei Mir Bist du Schön” (“To Me You Are Beautiful”), the 1937 song that catalyzed the era of Yiddish swing. A sub-genre of jazz, swing music is more upbeat and easy to dance, or “swing,” to than the style of jazz that originated in New Orleans that was born out of African music. In its golden age, Benny Goodman, the Jewish King of Swing, fought for integration in Tin Pan Alley and hired African American musicians to bring the new musical style to the masses.

“The fundamentals of jazz are the syncopation and rhythmic accents of the Negro,” American music theorist Henry Cowell wrote in 1930. “Their modernization is the word of New York Jews… So jazz is Negro music seen through the eyes of the Jews.”

Hailed by Jewish music scholar Neil W. Levin as “the world’s best-known and longest-reigning Yiddish theater song of all time,” “Bei Mir Bist Du Schein” was written by Jews, performed by Black musicians, popularized by a Lutheran trio of Norwegian sisters, and beloved by the Nazis — until they discovered its Jewish roots, that is. (Under its Germanized title, “Bei Mir Bist du Schön,” many assumed the language was a southern German dialect.)

A song so powerful that even the Third Reich couldn’t resist, “Bei Mir Bist Du Schein” launched the Andrews Sisters’ to fame overnight, fueled a growing counterculture against German fascism, and by way of blending American music with sounds of the shtetl, it helped ease Jewish immigrants’ assimilation into American society.

The song was originally written by Sholem Secunda for a Yiddish operetta in 1935. After hearing the African American jazz duo Johnnie and George perform the song in the Catskills, Jewish lyricist Sammy Cahn bought the rights and rewrote the lyrics in English, preserving just the titular chorus in Yiddish. Within a month of the Andrews Sisters’ recording of the song, some 250,000 records and 200,000 copies of sheet music were sold. (Hilariously, American fans couldn’t quite catch the song’s title, confusing it for “Buy a Beer, Mr. Shane” or, my personal favorite, “My Mere Bits of Shame.”)

“The lyrics were revamped for popular release to transcend the song’s Jewish roots and celebrate America’s melting of multiple languages and cultures,” writes Charles B. Hersch in his book, Jews and Jazz: Improvising Ethnicity. “As the song’s lovestruck protagonist imagines saying ‘bella bella‘ or ‘sehr wunderbar,’ each foreign tongue is simply a vehicle to express how “grand” the beloved is.”

In America, the success of “Bei Mir” helped Jews feel they made the right choice in fleeing pogroms of Europe — through theatre and music they could, and did, cement themselves in the New World. Benny Goodman furthered the Yiddish jazz craze with his iconic 1938 performance of “Bei Mir” at Harlem’s iconic Apollo Theatre — within months, a myriad of popular artists like Ella Fitzgerald, Belle Baker, Kate Smith, and the Barry Sisters recorded covers, hoping to cash in on the fad.

To highlight the new musical fusion of klezmer and jazz, New York’s WHN created “Yiddish Melodies in Swing,” a program that lasted two decades. The feat was a “sense of mastery over the challenge of integrating in the American mainstream while maintaining ties to their distinctive immigrant heritage,” writes Hersch.

Back in Germany, swing music was hardly a relief from the woes of war and Nazi violence. While Hitlerjugend — Hitler Youth, the Nazi’s youth organization — grew in popularity, so did the counter-movement known as Swingjugend. Rejecting societal oppression, uniformity, and police brutality, these teens separated themselves from the Nazi state by dancing the Charleston in speakeasy bars filled with the sounds of swing music, a genre that emulated free love, independence, and peace.

Members of Swingjugend let their hair grow long. The men carried umbrellas, the women wore heavy makeup, and collectively they mocked Hitlerjugend’s infamous “Sieg Heil” with proclamations of “Swing Heil.” With songs like “Bei Mir” beating in their hearts, the 1993 movie Swing Kids depicts the counterculture German rebels as they are confronted by the Nazis. The movie is fiction, but the historical atrocities are chillingly accurate: In 1941, 300 swing kids were punished for praising the “degenerate music” of Jewish and Black people — some were given haircuts, others were sent back to school, many were deported to Nazi concentration camps.

But even in the Nazi-drawn ghettos, the popularity of swing endured. In 1942 Theresienstadt —the “model” concentration camp, designed to fool the world into believing all was well and dandy in the Third Reich — Eric Vogul led the Ghetto Swingers, a jazz orchestra forced to perform in the main square for long hours. A disturbing charade, the Jewish musicians still found joy in performing jazz and swing music. In their darkest hours it was an escape.

“When I played I forgot where I was. The world seemed in order, the suffering of people around me disappeared — life was beautiful,” wrote Ghetto Swingers guitarist Coco Schumann in his autobiography. “We knew everything and forgot everything the moment we played a few bars.”

“Bei Mir Bist Du Schein,” of course, was one of the songs that “tranquilized ourselves into the dream world produced by the Germans for reasons of propaganda,” Vogel said. Filled with notes of hope and love that transcend language, that blissful bubble burst in 1944 when the camp was cleared and most of the remaining prisoners were sent to Auschwitz.

By the end of World War II in 1945, swing music was replaced with new sounds like Bebop and rhythm and blues. As Jews embraced a state of their own in 1948 with Hebrew as the lingua franca, Yiddish was swept to the side, left to gather dust along with the memories of pogroms and gas chambers.

“Israel was happening and Israelism was a way for Jewish people to be more American, more assimilated, more macho, more cowboy-like than the old skinny, left-wing, intellectual type so common with Yiddish culture,” Alicia Svigals, a founding member of the Klezmatics, tells The Washington Post.

Nearly a century after the golden era of klezmer-meets-jazz, I think the song that started it all is due for a comeback. So much of the landscape that gave way to Yiddish swing has returned, and the parallels are chilling: recent acts of police brutality launched a fiery wave of Black Lives Matter protests; anti-Semitism is at an all-time high; the crushed economy in the United States is being likened to the Great Depression, the very historic crisis that gave way to the swing era.

Made most famous by three non-Jewish sisters, “Bei Mir Bist Du Schein” is hardly the only Yiddish swing tune we should revere and revive as an unlikely protest song. But it’s the rich history of Black and Jewish musicians who made this “degenerate music” irresistible to the Nazis that makes this shtetl swing melody an ultimate song of resistance.